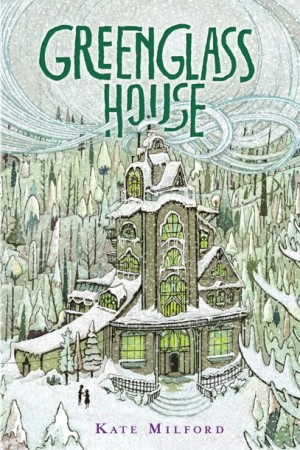 It’s wintertime at Greenglass House. The creaky smuggler’s inn is always quiet during this season, and twelve-year-old Milo, the innkeepers’ adopted son, plans to spend his holidays relaxing. But on the first icy night of vacation, out of nowhere, the guest bell rings. Then rings again. And again. Soon Milo’s home is bursting with odd, secretive guests, each one bearing a strange story that is somehow connected to the rambling old house. As objects go missing and tempers flare, Milo and Meddy, the cook’s daughter, must decipher clues and untangle the web of deepening mysteries to discover the truth about Greenglass House-and themselves.

How did we get this book: We received an ARC from the publisher. Thea bought a copy.

Why did we read this book: Because we have loved – LOVED – all of Kate Milford’s books and stories published to date.

Every time I read a new book by Kate Milford I end up convinced that I have once more found a secret treasure, one that has been written exclusively for me and me alone. There is always this sense of communion with her books and it is a matter of great distress to me that her books are not as widely read as they should be.

The Greenglass House is a smuggler’s Inn owned by Milo’s parents. It’s wintertime, school is done, the inn has no guests and Milo is ready for a well-deserved break. But on the first night of the winter holidays, the guest bell rings – over and over again until the empty inn is filled with odd, secretive guests that seem to be connected somehow to the house.

Each has a story to tell and they share them around the fire every evening. One of them is looking for an heirloom; a couple of thieves are looking for a beloved one’s past; one of them has nefarious reasons for being there – none of them are being completely truthful.

It’s down to Milo and his new friend Meddy, the cook’s daughter, to investigate what really brought these guests together (and why now) and to find out the objects that suddenly start to disappear.

Greenglass House is a great, fun mixture of cosy detective mystery, a whodunit in which the house and its history is one of the main characters, coming-of-age, ghost tale and a lovely family relationship at its centre. Those are interwoven beautifully – each element integral to the overall story without any of them sticking out like a sore thumb. This is a quality present in all of Kate Milford’s book to date – that feeling that the overarching story is as important as each character’s personal dilemma with detracting from any of its storylines.

It is the small subversions rather than the big twists (although they do exist in this story) that make her stories work. So for example, even though most characters are involved with breaking the law in some fashion, the story doesn’t forget that and in addition, builds it on top of social and economic problems.

Milo and Meddy don’t pretend to be detectives when they set about investigation but characters playing a role playing game a la Dungeons and Dragons. The creation of a bold, outspoken, daring character is what allows for Milo to not only become less insecure but to also free himself to feel and think things he wouldn’t otherwise do without a huge degree of guilt. Because Milo is an adopted child of a loving, supporting couple and he often feels and wonders about his blood family, about his own history. And this is so important for this story and works as a strong underlying theme but one that doesn’t take over the narrative and yet, is essential as a character quality anyway. The examination of what this little boy feels, of how others treat him, of perceived narratives, thankfully never went down a problematic route of magic resolution (“orphan magic” being something addressed in-narrative in a creative way). Instead, this storyline was treated with compassion, respect and kindness to all of the involved.

I also love how there is a timeless feel to the story – there are enough hints that the story is set in our own time but that it’s also not quite exactly the same temporal allocation.

Finally, because I must say this: this is an incredibly intelligent book that never ever looks down on its intended readers. Anyone who thinks middle grade books are/need to be simplistic and written down should read it. It’s a beautiful, smart, sometimes scary, often moving, book. A Notable Read of the year.

No, seriously, what Ana said. Every time I learn that Kate Milford has a new novel, or novella, or short story available, I get the giddies. Milford is one of those authors, like Frances Hardinge, who are criminally under-read and under-appreciated; her writing is smart, lyrical, just the right amount of creepy and wholly effective.

Greenglass House is no exception.

Milo and Meddy are fantastic lead characters, as are the entire eccentric cast of strange, wonderful figures staying over at the eponymous house. Together, Milo and Meddy assume different roles as they explore the mystery of the new guests and the house, the thefts that start to pile up and the thin excuses their guests have for being at the inn itself. I love the juxtaposition of kids solving a mystery/playing a game against the adults in this novel (similar to the issues in The Bone Shaker, The Broken Lands, as well as The Kairos Mechanism and Bluecrowne) – I also love the way that each of Milford’s stories – including the stories within stories in this book! – tie together. I do have to elaborate a little on Milo as a character because his arc is so incredibly powerful, and so beautifully written in Greenglass House. During the book, he takes on the role of “Negret” – a role that allows Milo to become more confident because of his powers, but eventually serves as a self-awakening role that empowers Milo as he shakes off so many of his doubts and fears. As the adopted child of loving parents, Milo struggles with his own insecurities (and his desire to learn about his birthparents), especially the insecurities and tensions that arise because he is Chinese and his parents are Caucasian.

Also Ana has already said it, but it bears repeating – one of the best things about Greenglass House and Kate Milford’s writing in general is that she never talks down or writes down to her readers. Even though this is a decidedly middle grade book, it is a complex, beautifully written novel. The mystery is perhaps a little easily solved – but that doesn’t detract from the awesomeness of the twist, and the efficacy of the novel.

I don’t know what else to say except that I loved Greenglass House. I think you will, too. Give it a try, why don’t you?