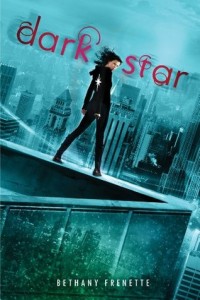 Audrey Whitticomb has nothing to fear. Her mother is the superhero Morning Star, the most deadly crime-fighter in the Twin Cities, so it’s hard for Audrey not to feel safe. That is, until she’s lured into the sweet night air by something human and not human–something with talons and teeth, and a wide, scarlet smile.

Now Audrey knows the truth: her mom doesn’t fight crime at night. She fights Harrowers–livid, merciless beings who were trapped Beneath eons ago. Yet some have managed to escape. And they want Audrey dead, just because of who she is: one of the Kin.

To survive, Audrey will need to sharpen the powers she has always had. When she gets close to someone, dark corners of the person’s memories become her own, and she sometimes even glimpses the future. If Audrey could only get close to Patrick Tigue, a powerful Harrower masquerading as human, she could use her Knowing to discover the Harrowers’ next move. But Leon, her mother’s bossy, infuriatingly attractive sidekick, has other ideas. Lately, he won’t let Audrey out of his sight.

When an unthinkable betrayal puts Minneapolis in terrible danger, Audrey discovers a wild, untamed power within herself. It may be the key to saving her herself, her family, and her city. Or it may be the force that destroys everything–and everyone–she loves.

Stand alone or series: First in the Dark Star Series

How did we get this book: Ana bought her copy. Thea received a review copy from publisher.

Why did we read this book: SUPERHEROES! And a cool sounding premise, featuring a mother-daughter relationship. Yes please.

I’ve wanted to read Dark Star since I first heard about it because it was supposed to be a superhero book (this impression was based on the blurb as well as the cover). Given my recent bad experiences with this subgenre, I was hopeful this would break the bad streak I was having.

Imagine my disappointment (and anger) when I realised how mislead I was when it turned out this is not, and I repeat, NOT a superhero book. At all.

It is a book about angels and demons. Sorry, kin and harrowers. Even though their origin story is utterly familiar: ancient creatures that have existed since before the “light” and became fascinated by humans and they way they experienced life and so they crossed over to become like them. And some of those became their guardians. Those who stayed behind ended up hating humans, inhabiting a world of darkness in the emptiness “beneath” and they attack Kin and Humans for sport because they hate them so much.

SO not Angels and Demons, right?

But ok, let’s forget about the initial disappointment over the Not–A-Superhero-Book thing or the disingenuous approach to this world’s mythology – what about plot and character development?

Well, I can’t say these worked for me either. The main character Audrey is a Kin but she doesn’t know it – her family thinks she shouldn’t know. EVEN THOUGH Kin are being killed around them and this knowledge could save Audrey’s life. So her mother keeps being secretive and obviously not telling her things which just results on Audrey running around, getting into trouble because of her Knowing (she just “knows” things < — that’s her power. It is exactly as it sounds) and then getting rescued.

Well NO THANK YOU VERY MUCH.

I read 60% of the book and decided it was enough.

I started Dark Star with an edge up on Ana – she forewarned me that this was Not a Superhero Book, so I went in with slightly lowered and adjusted expectations. I think this is a classic case of misleading marketing copy – because having known that this was not a book about superheroes, I was able to sidestep that “You ripped me off!” feeling and, I think, approach the book in a slightly more charitable light.

And you know what, folks? Since I wasn’t blindsided, I was able to read this book. And I liked it! I liked it a lot.

Yes, as Ana says, this is decidedly not a book that features traditional superheroes – but I disagree that it is a book about Angels and Demons per se. There is no denying that the Harrowings are Demons – they are called such throughout the book, and they live in the “Beneath” – a world that is reminiscent of Kim Harrison’s Ever After.[1. In fact, this book feels very much like a young Rachel Morgan story – same midwestern city setting (Minneapolis this time instead of Cincinnati), same high stakes, same fast paced plot, same endearing – if sometimes idiotic – heroine. The structures of the worlds are similar, too, though there are no witches or vampires or pixies in Dark Star. I mean this comparison as a HUGE compliment, by the way, because I freaking love Rachel Morgan and the Hollows.] I personally didn’t see the Kin as “angels” per se – they are humans whose blood has been mingled with that of the Ancient Ones. They are normal people, except some Kin have supernatural abilities – in Audrey’s mother’s case, the ability to move incredibly fast and showcase inhuman strength; in Audrey’s case, a powerful clairvoyance called “Knowing” (which I agree with Ana – it’s silly name for a superpower). Some Kin are amplifiers of power, some are teleporters, but the vast majority are just every day people without ability, without even the knowledge of their ancient lineage. The Guardians are small subset of the Kin, who are selected (or “Called”) by some larger unknown force – there is no choice involved.

This, I feel, is where there is a nice contrast between Superhero books and Dark Star. In the classic superhero (or even supervillain) arc, a hero may have special abilities or she may not – the thing that makes her assume the mantle and become a hero or a villain is choice. In Dark Star, there are absolute rules: you do NOT get to choose to be Kin, and you certainly do not get to choose to become a Guardian. You are born into the Kin, you may be born into a power, but you can only become a Guardian if you are Chosen by some higher force. It’s a very interesting and definitive distinction – and one I’m not sure I like, but it certainly is interesting fodder for a series arc.

Beyond a disagreement on nomenclature, I also have to agree that heroine Audrey puts herself into danger far more than she should – BUT I think that the irritating “we’re not telling you about your past for your own good” and Audrey’s idiotic desire to jump into the fray and fight even though she has no supernatural edge makes sense. The motivations and reasons behind these actions – both from Audrey’s mother (and her heartbreaking past – GUH), and from Audrey and her need to feel accepted and feel worthy of being the daughter of the Morning Star – feel genuine and make sense (even if both mother and daughter go about these secrets in very silly ways). From a character perspective, I actually liked Audrey very much as a heroine. She’s certainly not perfect, but there’s something endearing about her dedication to doing what is right, and in her subconscious need to prove herself to her mother and to Guardian Leon. The other standout relationships are between Audrey and her mother, Lucy, and the relationship Audrey has with Lucy’s “sidekick” Leon – the implied romantic angle is obvious, but I like that it isn’t hammed up in the book.

From a writing perspective, I also have to disagree with Ana – I thought that the info dumping was minimal and justifiable, given that Audrey has never known anything about the Kin or her heritage. Also, there’s a fantastic, heartbreaking sequence when she learns the truth about her mother, the past, and her father – very Harry Potter pensieve-ish. I mean that in a very good way. Finally, I don’t want to spoil anything but for the record – I loved the way the book ended, and the twist of the villain’s identity. Completely unexpected, and a kickass ending point for the next book.

The only thing I found myself regretting and wishing for as I read this book? That the novel was centered around Audrey’s mother, the Morning Star herself – who has a hell of a story and I think deserves a full novel of its own.[2. On that note, how much cooler would it have been to read Dark Star from Lucy’s point of view?!]

I enjoyed this book, and will definitely be back for more.

You know when you have that dream?

The one where you haven’t been to math class all year, and suddenly you’re taking the final exam? Or the one where you’re about to go on stage, and not only have you forgotten your lines, but for some reason you aren’t wearing pants?

In this dream, I stood on the roof of a building, looking down across the city. Minneapolis. My city. I knew those streets, the high-rises, the corporate offices reaching skyward. There was heat at my back, but no light. In a city of nearly four hundred thousand people, the silence felt heavy. Dead. The towering buildings sat dark around me. Empty streets trailed off into ramps and freeways, touching the edge of the horizon. The sky was starless, blank and bare. I stood and breathed and all around me the silence gathered. The darkness gathered.

Ana: DID NOT FINISH

Book Review: By These Ten Bones by Clare B. Dunkle