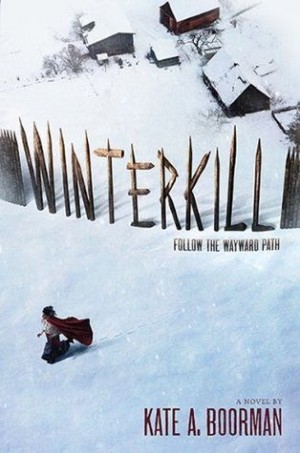 Emmeline knows she’s not supposed to explore the woods outside her settlement. The enemy that wiped out half her people lurks there, attacking at night and keeping them isolated in an unfamiliar land with merciless winters. Living with the shame of her grandmother’s insubordination, Emmeline has learned to keep her head down and her quick tongue silent.

When the settlement leader asks for her hand in marriage, it’s an opportunity for Emmeline to wash the family slate clean—even if she has eyes for another. But before she’s forced into an impossible decision, her dreams urge her into the woods, where she uncovers a path she can’t help but follow. The trail leads to a secret that someone in the village will kill to protect. Her grandmother followed the same path and paid the price. If Emmeline isn’t careful, she will be next.

Why did I read this book: From other reviews, Winterkill sounded like one part The Forest of Hands and Teeth by Carrie Ryan and another part The Village (the M Night Shyamalan film). I was intrigued enough by this, plus the admittedly gorgeous cover art, and was eager to give Winterkill a shot.

In Emmeline’s settlement, the rules are simple but finite. One must never go outside the settlement walls and into the woods – especially not after dark, lest they be hunted by the monsters that lurk outside. One must attend sermons and meetings, lest one be marked as Wayward – too many infractions, and one will be punished or even killed, another body strung up outside the woods as warning to others.

Emmeline has always had trouble with the rules. Stained from birth because of her Grandma’am’s lewd and Wayward behavior – she made a pass at the village leader, who was married, and she was put to death – Em has always had trouble fitting in to life in the Settlement. With her family history, her clubfoot, and her tendency to completely disregard the rules, Emmeline is on her way to becoming marked as a Wayward. But there’s something about the woods that calls to Emmeline in her dreams, something about the settlement itself her family’s past that doesn’t quite make sense to her. When one of the Settlement leaders asks for Em’s hand in marriage, her heart already torn with her feelings for another young man, Em is even more desperate to unravel the mystery of her dreams and the woods beyond the walls. And so she leaves, and discovers the truth that has been waiting for her all along.

A standalone dystopian-ish suspense-ish speculative fiction-ish young adult novel, Winterkill is sadly, overwhelmingly disappointing. On the positive end of the spectrum, Kate Boorman’s writing style is evocative and even-handed. I loved the blend of English and French, especially combined with the narrator’s restraint in translating phrases and words – it’s always nice when an author trusts readers enough to figure out what certain phrases mean based on context. The setting, too, comes alive through Boorman’s prose; the cold, overlong winter, the isolation of the colony, the state of terror in which everyone lives is beautifully laid out. Although there’s a tendency towards the melodramatic when it comes to the actual turns of phrases that narrator Emmeline uses, particularly when it comes to moments of emotional gravitas, the wordsmithing is also solidly done.

Unfortunately, that’s where the positives end. While stylistically, Winterkill is a compelling novel (in a gorgeous package), the actual story itself is sluggish, focused largely on insta-love and love triangle shenanigans. Basically, bland heroine Emmeline lays eyes on a studly dude with sweet muscular arms, who of course sees her immediately too, and the two are pretty much smitten. There’s also a nefarious villain character who Wants Emmeline For His Own (this character could have been interesting, had he not been reduced to simplistic villain). Everyone else is totally attracted to Em, too, because she’s Stained and apparently needs to be careful of what she does with her mouth because it’s too suggestive. I do appreciate what I believe is an attempt to subvert some of the more overtly heteronormative and misogynistic aspects of the settlement society (e.g. Em’s best friend must hide his homosexuality; Em’s grandmother’s backstory), but these aspects of character and plot are strictly tangential.

Far more time is spent on Emmeline’s internal monologue about the woods, about being Wayward, and of course about her feelings for the two dudes who are vying for her heart. Unfortunately, Emmeline is prone to navel gazing and her narrative is, frankly, of the same boring, mundane hesitant-but-brave teen YA romantic heroine stock. Also frustrating: there is a very cool conceit to the world, and we finally do meet outsiders from beyond the settlement, but then at the same time there’s random telepathy and magic that appears in the book’s latter portions, negating some of that earlier The Village-style tension. Meh.

Ultimately, Winterkill is not a book I would recommend or read again. Your mileage may vary, but I’d say you should stick to The Forest of Hands and Teeth if you’re looking for a much better, beautifully macabre book in the same vein.

Notable Quotes/Parts: You can read a preview for Winterkill HERE.