SFF in Conversation: Corinne Duyvis and The Insidious Comfort of Invisibility

Today, we continue our ongoing new series “SFF in Conversation” with a guest post from Corinne Duyvis, author of the excellent Otherbound and co-founder of Disability in Kidlit, a website that focuses on the portrayal of disability in children’s literature. 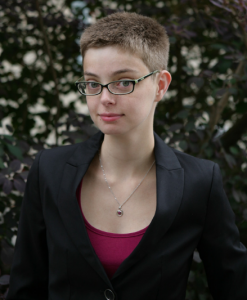 The Insidious Comfort of Invisibility

Growing up, I was a part of the privileged majority in nearly every way: I was female, yes, but I was white, middle-class, thin, cisgendered and ablebodied, and as far as I knew back then, I was straight and neurotypical as well.

I never realized any of that at the time. Even after I figured out that I wasn’t quite so straight and neurotypical as I’d thought, it took several more years to become consciously aware what exactly it meant for me to be, for example, white.

It was always invisible.

Looking back, that horrifies me. Not only are the privileged privileged, we don’t even have to be conscious of it. We can wander along blissfully unaware, raised to believe that we’re the normal, default state, and that everyone else somehow deviates.

They don’t need to. It’s assumed.

Except white protagonists are not the same damn thing as white pages, and it’s abhorrent that we’ve been brainwashed enough to see them as equally similar. This single, narrow type of person is the default human being for far too many people.

Countless conversations about marginalization and misrepresentation have shifted my thinking in many ways, including this: I notice now. I notice when a room is all-white. I notice when a book is all-straight. I notice when several books in a row do not acknowledge disabled characters. I notice when I haven’t even seen a book with a trans protagonist in months.

It’s one of several factors that push me to include a wide variety of characters in my own works—once I started noticing, I couldn’t stop, and the last thing I want to do is contribute to that overflowing wealth of white-cishet-abled-thin characters. Every story I write, every TV episode I see, at the end of it, I wonder, “Why did everybody need to be thin? Why was every single character white? Why was every single romance—even the casual background mentions of crushes and dates and marriages—between a woman and a man?”

Noticing is step one—but oddly enough, it’s often glossed over. Promoting diversity will be framed as charitably lifting up poor underrepresented groups—*cringe*—but will rarely acknowledge the logical flipside of the story. As a rule, people are only marginalized when others marginalize them.

Worse, many people don’t want us to notice. They’ll talk about diversity and anti-racism, but will interpret people pointing out whiteness and straightness as an insult rather than a fact. They’ll see it as an attack, because they’re used to comfy invisibility-as-default. They’ll praise “colorblindness” as though it’s something to aspire to. “Colorblindness” as an ideal has been criticized at length by many, many smart people—let’s listen. Don’t strive to make the marginalized invisible; strive to make the privileged visible.

It’ll make people uncomfortable. Trust me. They’ll live. The least the privileged can do is be aware of it.

Do not allow the barrage of majority narratives to pass unremarked upon.

Do not let the privileged be the default.

About the author: Corinne Duyvis is a lifelong Amsterdammer and former portrait artist now in the business of writing about superpowered teenagers. In her free time, she finds creative ways of hurting people via brutal martial arts, gets her geek on whenever possible, and sleeps an inordinate amount.

Over at Kirkus: Rolling in the Deep by Mira Grant

SFF in Conversation: Aliette de Bodard on “Women Who Became Invisible: In the Wake of This Year’s Nebula Awards”