DNF: The Kiss of Deception by Mary E. Pearson 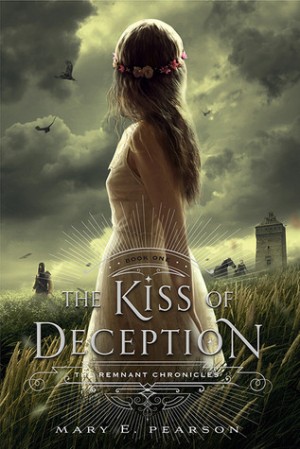 Title: The Kiss of Deception

A princess must find her place in a reborn world.

She flees on her wedding day.

She steals ancient documents from the Chancellor’s secret collection.

She is pursued by bounty hunters sent by her own father.

She is Princess Lia, seventeen, First Daughter of the House of Morrighan.

The Kingdom of Morrighan is steeped in tradition and the stories of a bygone world, but some traditions Lia can’t abide. Like having to marry someone she’s never met to secure a political alliance.

Fed up and ready for a new life, Lia flees to a distant village on the morning of her wedding. She settles in among the common folk, intrigued when two mysterious and handsome strangers arrive—and unaware that one is the jilted prince and the other an assassin sent to kill her. Deceptions swirl and Lia finds herself on the brink of unlocking perilous secrets—secrets that may unravel her world—even as she feels herself falling in love.

Stand alone or series: Book 1 in the Remnant Chronicles

Why did I read this book: I loved Mary E. Pearson’s YA science fiction novel The Adoration of Jenna Fox (although I confess that I haven’t read the rest of the books in that series). When I learned that Pearson had a YA fantasy novel in the works, I was intrigued.

Today was the day a thousand dreams would die, and a single dream would be born.

On her wedding day, the First Daughter of the House of Morrighan, sixteen-year-old Princess Lia defies tradition and runs away. Determined not to be wedded as a matter of royal convenience, Lia dreams of a world in which she can love and live as she pleases. With her trusted best friend and hand maiden Pauline, Lia leaves her unknown bridegroom at the altar and her family without a word. Together, the pair make their way to the small village of Terravin, where they find solace with Pauline’s aunt and work as humble maids at the local inn and tavern. Here, Lia is determined to earn her own keep, to work with her hands, and be free of the requirements and pressures of courtly life.

Unfortunately for Lia, however, her escape is not without consequences. Her jilted bridegroom, the prince of a neighboring kingdom, and an assassin hired to kill the princess team up on the road and manage to track Lia down with ease. Of course, both prince and assassin become smitten with Lia upon meeting her – and vice versa. You see where this is going?

The first book in Mary E. Pearson’s Remnant Chronicles, The Kiss of Deception is billed as a YA fantasy novel about a headstrong, independent princess determined to challenge her fate. In reality, however, The Kiss of Deception is a protracted love triangle of the insidious insta-love variety, set against the backdrop of a haphazardly constructed, wholly superficial fantasy world.

In other words: this book and I did not agree with each other. In fact, I did something I really hate doing – I put the book down after reaching the halfway mark. That’s right. The Kiss of Deception is a big, sad DNF (did not finish) for me. So what exactly is wrong with Pearson’s new fantasy novel? Allow me to elaborate on a few key sticking points uncovered during my brief time with the book:

First and foremost, the entire novel is merely a vehicle for a ridiculously contrived, predictable, boring love triangle. Lia is pursued not only by a young and handsome prince, but also a young and handsome assassin. One of these characters is fair and golden; the other is dark and moody. Both are determined to bring Lia to swift and cruel justice in their own ways, but both instantly fall in love with the fair princess shortly after meeting her. The entire narrative structure of the novel is mostly told through Lia’s perspective, although both Assassin and Prince (denoted as such at the start of their respective chapters) are given short interstitial chapters throughout – mostly, their thoughts are devoted to how beautiful Lia is and how hard it will be to kill her/how they must protect her. No. Thank you, but no.

Ostensibly, The Kiss of Deception is a fantasy novel. There is some hinting at inter-kingdom troubles and political conniving, but such stirrings are mere mumbles set in place to give pseudo-motivations to account for Rafe and Kaden’s initial push to find Lia at the start of the book. Similarly, there is mention of religion in this fantasy world and Lia’s rebellion against the strict scriptures that dictate she must be something greater as the First Daughter of her family, but again this worldbuilding aspect is completely superficial and seems to be in place more to give Lia a reason to run away and rebelliously fall in love with two handsome young men rather than serve any functional purpose in the structure of the story.

What else? The characters are all of the pretty, bland, Western European/Caucasian variety, naturally. Lia might actually be a smart and determined princess, but is a terrible friend (she chooses to lie to Pauline, telling her that her lover is dead rather than share the knowledge that he’s actually just a philanderer who played Pauline like a mandolin), and makes several questionable choices that defy logic and determination (e.g. when a secretive runaway royal is very clearly marked by a huge, unmistakable, elaborate marriage tattoo, said royal should NEVER be walking around bathing publicly or wearing clothes that reveal said tattoo).

Suffice it to say, The Kiss of Deception and I are not literary soulmates. After getting through half of the book and realizing that nothing else positive could possibly come out of my experience with the novel, I decided to call it quits. That said, there is certainly an audience out there for this book. If you like a very light touch of fantasy as a backdrop for a lengthy love triangle between a beautiful princess and her two handsome suitors, The Kiss of Deception is the ticket. (I should also mention, to Mary E. Pearson’s credit, the writing style is lush and effortless – I do love her wordsmithing, even if the content is not to my particular taste in this case.)

If you like structured worldbuilding, actual fantasy elements, and a plot that does not focus solely on romantic geometry, you should probably steer clear of this one.

Today was the day a thousand dreams would die and a single dream would be born.

The wind knew. It was the first of June, but cold gusts bit at the hilltop citadelle as fiercely as deepest winter, shaking the windows with curses and winding through drafty halls with warning whispers. There was no escaping what was to come.

For good or bad, the hours were closing in. I closed my eyes against the thought, knowing that soon the day would cleave in two, forever creating the before and after of my life, and it would happen in one swift act that I could no more alter than the color of my eyes.

I pushed away from the window, fogged with my own breath, and left the endless hills of Morrighan to their own wor- ries. It was time for me to meet my day.

The prescribed liturgies passed as they were ordained, the rituals and rites as each had been precisely laid out, all a testament to the greatness of Morrighan and the Remnant from which it was born. I didn’t protest. By this point, numbness had over- taken me, but then midday approached, and my heart galloped again as I faced the last of the steps that kept here from there.

I lay naked, facedown on a stone-hard table, my eyes focused on the floor beneath me while strangers scraped my back with dull knives. I remained perfectly still, even though I knew the knives brushing my skin were held with cautious breaths. The bearers were well aware that their lives depended on their skill. Perfect stillness helped me hide the humiliation of my naked- ness as strange hands touched me.

Pauline sat nearby watching, probably with worried eyes. I couldn’t see her, only the slate floor beneath me, my long dark hair tumbling down around my face in a swirling black tunnel that blocked the world out—except for the rhythmic rasp of the blades.

The last knife reached lower, scraping the tender hollow of my back just above my buttocks, and I fought the instinct to pull away, but I finally flinched. A collective gasp spread through the room.

“Be still!” my aunt Cloris admonished.

I felt my mother’s hand on my head, gently caressing my hair. “A few more lines, Arabella. That’s all.”

Even though this was offered as comfort, I bristled at the formal name my mother insisted on using, the hand-me-down name that had belonged to so many before me. I wished that at least on this last day in Morrighan, she’d cast formality aside and use the one I favored, the pet name my brothers used, shorten- ing one of my many names to its last three letters. Lia. A simple name that felt truer to who I was.

The scraping ended. “It is finished,” the First Artisan declared. The other artisans murmured their agreement.

Reading Next: Through the Woods by Emily Carroll