Kaleidoscope is an exciting anthology of diverse contemporary YA Science Fiction and Fantasy stories co-edited by Alisa Krasnostein and Julia Rios and set to be published on August 5: 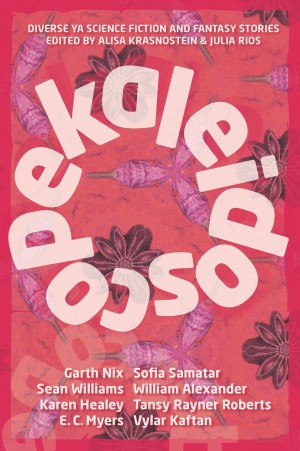 What do a disabled superhero, a time-traveling Chinese-American figure skater, and a transgendered animal shifter have in common? They’re all stars of Kaleidoscope stories!

Kaleidoscope collects fun, edgy, meditative, and hopeful YA science
fiction and fantasy with diverse leads. These twenty original stories
tell of scary futures, magical adventures, and the joys and heartbreaks of teenage life.

Today, we are delighted to host Alisa and Julia to tell us a bit more about the table of contents and the stories included in the anthology.

Please give it up for the editors of Kaleidoscope!

It’s terribly difficult to talk about what one thing makes us most excited about Kaleidoscope, or which story is our favorite. Each story in this book shines on its own, and together they make a shifting brilliant kaleidoscope of wonder. So we decided for this post we’re going to talk about all of them! We’re taking turns, with each of us saying just a couple of sentence about the stories in the order that they appear in the book.

Alisa on “Cookie Cutter Superhero” by Tansy Rayner Roberts: A young girl with a curve instead of a hand is given the opportunity to be a superhero. With the addition of superpowers, Cookie Cutter Superhero asks the question, does she need two hands? I love this story because it’s fast paced, funny and girly and is also a sharp, snarky commentary on sexism in comic books.

Julia on “Seventh Day of the Seventh Moon” by Ken Liu: When we received this story, I wished I had been able to read it when I was fifteen and in the throes of first love. Aside from being a gorgeous story about the origins of the Qixi Festival in China, it’s also a gentle and wonderful story about what being in love means.

Alisa on “The Legend Trap” By Sean Williams: The Legend Trap still gives me goosebumps when I read it. Urban legends are always creepy but this one has added parallel universe action. Three teenagers hop into a d-mat teleporter and see if they can teleport into an alternate universe–you know, which is pretty much the same as this one but … not. What if you only get the password to jump there but not back? I can’t think about it too hard because this story is dark and suffocating and deliciously brilliant.

Julia on “End of Service” by Gabriela Lee: For as long as Aya can remember, her mother has been overseas working to support her family. Now she’s dead, and Aya is struggling with the grief of losing a mother she never really knew, and the realization that the commodification of foreign workers is much bigger and creepier than she had thought. This story is dark and emotional, but it also contains some hope and beauty.

Alisa on “Chupacabra’s Song” by Jim C. Hines: Nicola is an autistic girl who speaks to animals by weaving magical songs. Hines beautifully portrays the feelings of alienation and difficulty communicating with others while simultaneously using that to empower her.

Julia on “The Day the God Died” by Alena McNamara: As someone who spent a lot of time being confused and miserable in high school, this story about a gender questioning teen’s confusion definitely struck a chord with me. That our protagonist meets a mysterious dying god was an awesome bonus!

Alisa on “Signature” by Faith Mudge: Signature is a fun urban fantasy about Priya, a wheelchair user who works in a gorgeous indie bookstore with a vibrant community. She finds herself in a nasty predicament after making a dodgy deal with a Fate, and has to find a way to save the bookstore and her colleagues.

Julia on “The Lovely Duckling” by Tim Susman: Have you ever wished you could shift into an animal form? In this story, some people can, and it looks like our protagonist, a transgendered teen named Mark, has a natural talent for it. Now if only he can convince his father to accept him for who he is and let him go to shifter school…

Julia on “Vanilla” by Dirk Flinthart: Kylie’s a Somali-Australian teen whose father is desperate for her to assimilate. When alien refugees arrive on Earth, Kylie starts to wonder what assimilation really means, and what are the costs? This story reflects on identity and friendship across cultures in ways both funny and heartfelt.

Alisa on “Careful Magic” by Karen Healey: What if that episode of Buffy “Bewitched, Bothered, Bewildered” was good? It would almost come close to Karen Healey’s “Careful Magic”. Helen is an Order Queen, in a school of chaos workers. Her OCD, which compels her to complete her cantrips before she can start her school day, on top of being an Order worker, makes it hard for her to make friends. That is, until someone needs her to fix a love spell gone wrong. I also really love how she points out that being mean to a girl is *not* the way to get her to like you. Hopefully that can stop being a plot device soon.

Julia on “Walkdog” by Sofia Samatar: We asked Sofia for a story, and she turned in a term paper. For that alone, I love it. This story emerges through the “research” of the paper and the increasingly more personal footnotes. It’s funny in places and heartbreaking in others.

Alisa on “Celebration” by Sean Eads: Sean Eads brings a really great sense of humour to his tale about James Caleb Wilde (Caleb. You have to pronounce it right. There’s an accent over the whole word.) getting sent to conversion therapy for the summer. As he says himself, at least he finally gets to meet some other gay guys, and have his first kiss, probably not what his parents had in mind. But all is not as it seems at Celebrate Your Life. Humankind might just be being judged for our morals by what’s going on there.

Julia on “The Truth about Owls” by Amal El-Mohtar: This is another one where the confused teen I was in high school really feels for the confused teen in the story. Owls are beautiful and powerful and potentially terrifying, which is part of why Anisa, a Lebanese-British girl who may have scary magical powers, identifies with them. This story is by turns dark and hopeful. Like “Vanilla” by Dirk Flinthart, it touches on questions of assimilation and identity, and like all of Amal’s stories, it’s beautiful in its use of language.

Alisa on “Krishna Blue” by Shveta Thakrar: Beautifully textured, layered and dripping in colour and flavour, Krishna Blue is a totally different take on a vampire story. Neha just wants to belong, to fit in. Who can’t relate to that feeling in high school? This story takes my breath away and makes me cry.

Julia on “Every Little Thing” by Holly Kench: Geeky lesbians, magic spells, invisible disabilities, supportive friendships: this story’s got it all! I really loved the gentle and fluffy way this story explored the themes of friendship, love, and the frustration of not always being able to do everything you’d like to do.

Alisa on “Happy Go Lucky” by Garth Nix: In this story, those with Luck live a privileged life, while those without Luck do not. Questioning the system, even in the depths of your personal computer hard drive might give reason to have your Luck dissipate. When this happens to Jean’s parents, she refuses to live a life of poverty with no hope, and risks her life to find something better. Nix’s story has important things to say about asylum seeking and the end point of “stop the boats” policies.

Julia on “Ordinary Things” by Vylar Kaftan: Katie is going through a bad breakup, and it’s even worse because of her severe anxiety issues. This is a gorgeously written story about examining your strengths and weaknesses and finding a way to make them work for you.

Alisa on “Double Time” by John Chu: Time travelling ice skaters feels like enough said because I’m not sure there can be anything more awesome. In “Double Time”, people can travel back four minutes into the past, which, if you’re a figure skater, means you could totally jump back at the end of your routine to skate the whole thing next to yourself. I wish the Olympics would really get on that because the spectators can also jump back and watch everything again. Chu also explores familiar issues (to me) of living up to expectations, the pressure to succeed and seeking approval from those you love.

Julia on “Welcome” by William Alexander: I’m pretty used to people assuming I’m not a Latin@ (my father came from Mexico) because I look white. When I found out Will was also a Latin@, we actually high fived. Just because we don’t look a certain way doesn’t mean that our family histories aren’t important parts of who we are. That’s why I was delighted when he sent us this story about a Latin@ brother and sister who sail ships between Earth and the moon. How cool is that!?

Julia Rios is a Hugo nominated fiction editor at the online magazine, Strange Horizons. She’s also the co-editor with Alisa Krasnostein of Kaleidoscope: Diverse YA Science Fiction and Fantasy Stories, and with Saira Ali of In Other Words, an anthology of poems and flash fiction by writers of color. When not editing, she writes, podcasts, and occasionally narrates audio stories and poems. She’s half-Mexican, but her (fairly dreadful) French is better than her Spanish.

Alisa Krasnostein is editor and publisher at Australian specialty press Twelfth Planet Press, a creative publishing PhD student and recently retired environmental engineer. She is also part of the thrice Hugo nominated Galactic Suburbia Podcast team. In 2011, she won the World Fantasy Award for her work at Twelfth Planet Press. She was the Executive Editor and founder of the review website Aussie Specfic in Focus! from 2004 to 2012. In her spare time she is a critic, reader, reviewer, podcaster, environmentalist, knitter, quilter and puppy lover. And new mum.

Courtesy of the editors, we are giving away TWO copies of Kaleidoscope (hard copy, epub, or mobi to be chosen by the winners). The contest is open to EVERYBODY, ANYWHERE and will run until Sunday August 9 12:01AM EST. Use the form below to enter. Good luck!