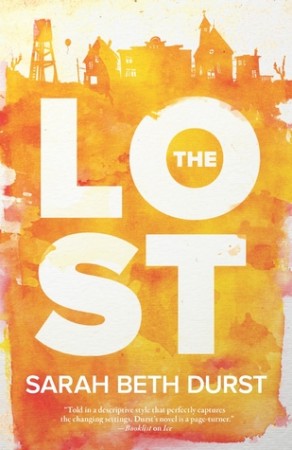 It was only meant to be a brief detour. But then Lauren finds herself trapped in a town called Lost on the edge of a desert, filled with things abandoned, broken and thrown away. And when she tries to escape, impassable dust storms and something unexplainable lead her back to Lost again and again. The residents she meets there tell her she’s going to have to figure out just what she’s missing–and what she’s running from–before she can leave. So now Lauren’s on a new search for a purpose and a destiny. And maybe, just maybe, she’ll be found…

Against the backdrop of this desolate and mystical town, Sarah Beth Durst writes an arresting, fantastical novel of one woman’s impossible journey…and her quest to find her fate.

Stand alone or series: First in a trilogy with second book The Missing already set to be published later this year

Why did we read this book: Because we are huge Sarah Beth Durst fans and were curious about her first foray into adult fiction

And yet Lauren finds herself spending the night away. Just one night, she tells herself, “I will call mom in the morning” she says to no one at all. But morning comes and she finds she is trapped in this town called Lost, unable to leave, that impassable dust storm just around the corner sending her into a loop back to Lost every time she does try to leave.

In time, Lauren comes to learn that Lost is a town filled with things and people who have been abandoned, forgotten, broken. Lost souls, lost objects. Its inhabitants trapped in this limbo having to find what they lost before the Missing Man can send them back (or away, or on). Except the Missing Man comes one day and sees Lauren and disappears. Lauren is confused, even more lost than before. Worse, Lost’s dwellers are not very happy about the situation and danger looms around every corner.

There are a lot of things about The Lost that are quite good indeed. The premise, a Twilight Zone-esque set up in which Lost is a desolate, sad, hard place to live where Lauren spends her days scavenging for food, trying to be safe. It’s never quite clear whether everything is imaginary or real and if real, what is the extent of what “real” means in the context of the story. The mysteries of Lost and its inhabitants, the questions that surround Lauren and her own placement in that situation as well as her journey to find out what exactly has she lost are what move the plot for the most part.

Another positive point is the emotional pull of the novel: be it Lauren’s yearning for what she has lost; be it her poignant relationship with her mother or the budding relationship she develops with other inhabitants of Lost. The latter is fraught with possible misery and are thoughtful in the way they examine the nature of passing, brief relationships. Given that Lauren believes she is only but passing through Lost, how much of herself does she allow to get involved with these people? Will that break her heart? Will that make it harder for her to leave when the time comes for her to go back to her mom? Difficult decisions are to be inevitably made and I loved how these played out in the novel. Those facets of the novel truly resonated.

That said, the middle sags with repetitive tension. There is only so much you can do with a limited space and a limited storyline such as this. In fact, it occurs to me that The Lost might have been more effective, more impacting as a short story.

Ultimately, I am not sure how I feel about the idea of Lost. How does that work exactly in the context of the whole world? Are there other “Lost” places? What are the rules? Does everything and everyone that is lost in the world end up there in Lost?

Similarly, the romantic relationship that develops between Lauren and Peter – one of Lost’s VIPs – was creepy more than romantic. He stalked her, walked into her space, constantly demeaned her actions and with the power disparity between them, it just made me uncomfortable. Even though those were more or less remarked by Lauren, it feels those concerns were brushed away too casually.

BUT since this is the beginning of a trilogy perhaps those will be addressed in-depth. Because there was enough goodness here to make me want to read more and see what happens next.

I have one word to sum up my experience with The Lost: ambivalent.

I love the idea of the town of Lost, and its hopeless inhabitants. The setup of the novel is, as Ana mentions, very Twilight Zone-esque (I freaking love The Twilight Zone, so I mean this as a huge compliment). A woman drives alone down a desert road late at night and stumbles across a quirky, impossible town from which she cannot escape. If that’s not an awesome Rod Serling setup, I don’t know what is.

Add to this premise the distrustful, eccentric nature of everyone in Lost. The folks of this dusty, scavenged town are odd, gritty survivors – they’re locked in a bizarre kind of limbo, outside of space and time. As such, there’s plenty of room for exploration and growth here – had this been an ensemble cast television show, I could easily see myself getting sucked into each character’s flashbacks a la Lost. Especially our heroine’s backstory, as she recalls the events leading up to her dramatic late night drive away from home, to escape the pressure and sadness of her mother’s illness.

Unfortunately… beyond premise, there isn’t too much else going for The Lost. The novel is protracted unnecessarily – this should have been a killer short story or novella, not a full length book and certainly not an overarching trilogy – with a rote and supremely creepy/eye-twitch-inducing romance, to boot. Weirdly, there isn’t much exploration of the people of Lost, though I suppose it makes sense given that Lauren doesn’t want to entrench herself in their sad lives and is driven by her singular desire to leave the town and find her mother. Another wasted opportunity lies with the worldbuilding aspect of the book, which essentially boils down to ‘this is a place where lost things appear’ without further explanation, examination, or implication. There’s SO much interesting fodder here for SFF backstory! Alas, answers are kept vague and focus is placed firmly on Lauren and two characters: a sweet young lost child named Claire, and a hunky magic dude named Peter who can Find people in the Void. The attraction to Peter is instantaneous and based on his studly body and his sexy ability to watch Lauren from her closet while she is sleeping without her consent. But, you know, sexy, right?

As Ana says, the middle portion (actually, the majority of the novel) sags under the weight of manufactured story and tension – set up booby traps around the house, escape from wild dogs, look at all of this stuff happening to fill pages without impacting the actual story – and there’s a sad lack of emotion or color to flesh out the initial promise of Lost. Ultimately, that’s why I’m so disappointed – Sarah Beth Durst is a writer of great skill (see her unparalleled novel, Vessel), but I wasn’t ever able to form a connection to anything or anyone in this book. Sadly, I won’t be continuing with the series.

Things I lost:
a stick of Chapstick
a few quarters
one turquoise earring, a gift
my old college roommate’s new phone number
my left sandal
Mr. Rabbit, my favorite stuffie from my preschool years
my way

For the first hundred miles, I see only the road and my knuckles, skin tight across the bones, like my mother’s hands, as I clutch the steering wheel. For the second hundred miles, I read the highway signs without allowing the letters to compute in my brain. Exit numbers. Names of towns. Places that people call home, or not. After three hundred miles, I start to wonder what the hell I’m doing.

In front of me, the highway lies straight, a thick rope of asphalt that stretches to a pinprick on the horizon. On either side of the highway are barbed wire fences that hem in the few cows that wander through the scrub-brush desert. Cacti are clustered by the fence posts. Above, the sun has bleached the blue until the sky looks like fabric stretched so thin that it’s about to tear. There are zero clouds.

I should turn around.

Instead, I switch on the radio. Static. For a moment, I let the empty crackle of noise spray over me, a match to my mood, but then it begins to feel like prickles inside my ears. Also, I begin to feel self-consciously melodramatic. Maybe as a sixteen-year-old, I’d have left the static on, but I’m twenty-seven. I change the station. Again, static. And again. Again.

First option: an apocalypse has wiped out all the radio transmitters.

Second, much more likely, option: my car radio is broken.

Switching the radio off, I drive to the steady thrum of the car engine and the hiss of wind through the cracked-open window. I wanted the radio so I wouldn’t have to think. I listen to the wind instead and try to keep my mind empty.