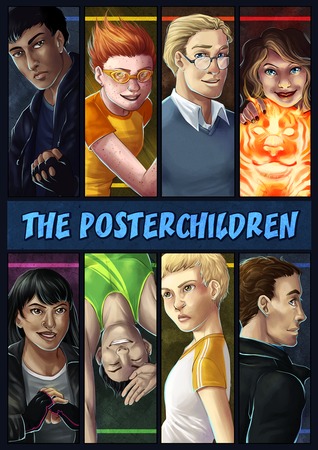 Nestled in the Cascade mountains in the Pacific Northwest, Maillardet’s Foundation for the Future of Humanity is widely accepted as being the premiere training facility for young posthumans. The Academy accepts superpowered posterchildren from ages six through seventeen, guiding them through the training that they’ll need if they want to become legally licensed heroes.

Maillardet’s Academy advertises itself as being for all types, welcoming the offspring of the greatest heroes of today – like Ernest Wright, the son of the Commander – along with new posters just learning to control their powers – like Juniper Hovick, a temperamental New Yorker with a flaming menagerie. Maillardet’s is where the heroes of tomorrow are assembled today, so the pressure to perform is high.

For disgraced legacy poster Malek Underwood, the third block of his training begins with him being knocked from his pedestal as the top student in the school, then paired with an almost failing lesbian speedster named Zipporah Chance. Though they come from different backgrounds, Ernest, Juniper, Malek, and Zipporah all have the same goal: surviving the year.

If they’re ever going to become heroes, they have to make it to finals, first.

Why did I read this book: When we posted our reading stats for last year, I sadly remarked on the low number of LGBTQIA and PoC books I’ve read last year and promised to do better. A reader (sorry, I forgot who it was but THANK YOU), recommended The Posterchildren series to me.

Last year SciFi author Ann Leckie wrote a really interesting (and well worth reading) post about what we mean when we ask for novels that are “significant”. Part of her article raises the important point about who is doing the asking and what is the criteria used when doing so. She proceeds to make the following analogy:

Imagine that you dearly love, absolutely crave, a particular kind of food. There are some places in town that do this particular cuisine just amazingly. Lots of people who are into this kind of food hold these restaurants in high regard. But let’s say, at every single one of these places, every now and then throughout the meal, at random moments, the waiter comes over and punches any women at the table right in the face. And people of color and/or LGBT folks as well! Now, most of the white straight cis guys who eat there, they have no problem–after all, the waiter isn’t punching them in the face, and the non-white, non-cis, non-straight, non-guys who love this cuisine keep coming back so it can’t be that bad, can it? Hell, half the time the white straight cis guys don’t even see it, because it’s always been like that and it just seems like part of the dining experience. Granted, some white straight cis guys have noticed and will talk about how they don’t like it and they wish it would stop.

Every now and then, you go through a meal without the waiter punching you in the face–they just give you a small slap, or come over and sort of make a feint and then tell you they could have messed you up bad. Which, you know, that’s better, right? Kind of?

Now. Somebody gets the idea to open a restaurant where everything is exactly as delicious as the other places–but the waiters won’t punch you in the face. Not even once, not even a little bit. Women and POC and LGBT and various combinations thereof flock to this place, and praise it to the skies.

I love novelizations of superhero stories. Love them. But more often than not those stories end up being incredibly sexist romps from a male gaze perspective that tends to objectify women. I read them and I feel like I am being punched in the face.

So you can imagine my delight when discovering The Posterchildren: Origins. It’s a superhero YA novelization divided in issues, that is not only super fun but also attentive to female empowerment and featuring a plethora of diverse PoC and LGBTQ characters.

Story-wise it is exactly what it says in the title: “origins”. Taking place within the Maillardet’s Foundation for the Future of Humanity (a training facility for young posthumans), it follows four posterchildren in their first year of what passes for high school in this alternate world as they struggle to understand and control their powers as well as the responsibility that comes from having them.

Ernest is the son of the Commander, one of the most famous superheroes of all time. For someone as earnest as Ernest, dealing with the legacy and the pressure is part honour and part torture. But he will do it, because that’s what good heroes do. Malek has a similar legacy do deal with, except for the fact that his own father is more infamous than famous. For Mal, the pressure to perform and to win are perhaps more important than the reasons for doing so. He is kind of a douchebag.

Juniper has a strong temperament, awesome leadership skills and a strong love for fashion. Growing up outside the closed community of superheroes has given her a different, welcome perspective after she is basically forced to attend the Foundation. Zip is eager to learn and do better with regards to her academic skills– she is superfast which ends up being a problem when trying to express herself.

Mal is Arab; June is fat; Zip is lesbian – those are intrinsic parts of who they are but are not addressed as “issues” that “need” to be dealt with within the story. They simply are. Their stories are about everything in their lives: about discovering the limits of their power; learning to control them attending lessons that go from acting (because you need to know how behave in front of cameras) to law; about navigating the pressures of history and legacy; about making it to lessons and having fun at parties. It’s about family, falling in love, making friends, and learning to work as partners. Ernest learns to let go, June becomes more trusting, Zip more confident and Mal less of a jerk. It’s great because it is so nice.

Beyond those protagonists, a bunch of other secondary characters also shine from the funny Maks (who I think is bisexual and poly and please let him hook up with Ernest and June) to Mal’s mother Amira aka The Queen.

On the downside, parts of the book are exposition-heavy, with a tendency toward telling instead of showing. Thankfully, this did not diminish my enthusiasm for the characters or for the story’s potential.

Interestingly, for a book about super people, there is very little outside conflict. The plot is mostly character-driven focusing on their inner lives. Although there are glimpses of a mystery surrounding Mal’s father as well as foreshadowing about the Foundation not being exactly The Best Place Ever, this first volume is much more about building up a foundation for what I hope will be a long, long series.

Here’s to not being punched in the face.

Additional Thoughts: I somehow missed this but The Posterchildren was very successfully crowd-sourced in 2012. In addition to publishing this first volume there has been subsequent “Timely Tales” about secondary characters from this world. I just love the covers SO MUCH: 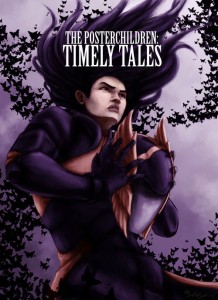 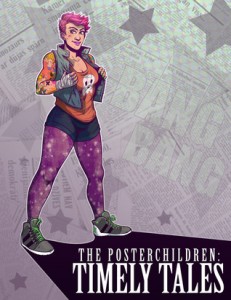 Rating: 7 – Super Good with so much potential for more growth in the future

Reading Next: Half Bad by Sally Green