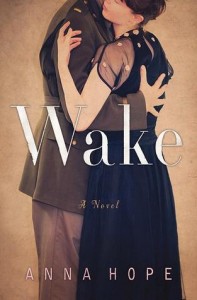 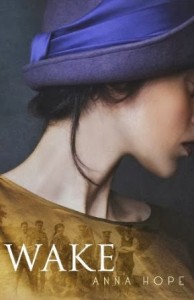 Five Days in November, 1920:
As the body of the Unknown Soldier makes its way home from the fields of Northern France, three women are dealing with loss in their own way: Hettie, who dances for sixpence a waltz at the Hammersmith Palais; Evelyn, who toils at a job in the pensions office, and Ada, a housewife who is beset by visions of her dead son. One day a young man comes to her door. He carries with him a wartime mystery that will bind these women together and will both mend and tear their hearts.

A portrait of three intertwining lives caught at the faultline between empire and modernity, Wake captures the beginnings of a new era, and the day the mood of the nation changed for ever.

How did I get this book: Review Copy from the Publisher via NetGalley

Why did I read this book: The blurb of the book has “Ana” written all over it. Plus, I will inevitably be attracted to a bunch of upcoming books about WWI that are sure to be published this year.

I just want to preface this review by getting this off my chest straight away: Wake is a beautiful, moving book. I am completely in love with it.

Wake:
1) Emerge or cause to emerge from sleep
2) Ritual for the dead
3) Consequence or aftermath.

In 1920, two years after the end of World War I, its effects are still strongly felt by all in England, independent of class, gender or age. That year, the British and French armies decided to carry out the burial of an unidentified soldier as a gesture to symbolise the common memories and lingering grief felt by their nations and to celebrate the countless unknown dead of the First World War. In Britain, the interment ceremony took place on 11 November 1920 at Westminster Abbey in London.

Wake takes place in the five days leading up to the burial. A small part of its narrative follows the Unknown Warrior’s body as it journeys from trench to abbey, from town to town, from France to England. The mother who takes her son to meet “his” father; the soldier who recalls his brief encounter up against a wall with another soldier whose name he never knew; the little girl who is the first to see the ship as it approaches Dover; the undertakers who, as they prepare the body, measure it against their memories of the men they knew and who disappeared without a trace. Different feelings are evoked and memories upturned, in touching short passages from the perspective of those unnamed characters whose lives are briefly affected, one way or another, as the body passes them by.

The rest of the story follows three women, portraying the way they have been affected by the war.

Ada is the oldest, about to celebrate her 25th wedding anniversary to her loving husband Jack. Their relationship is not as it used to be, they have grown distant ever since the day they received the letter about their son Michael’s death. Ada has been a shadow of a woman ever since – for the first letter might have been received but there was never a second letter: the one that tells about the burial place, the one letter that is final. She sees the ghost of her son everywhere, thinking he might still be alive. In certain circumstances hope is damning and Ada lies in wait, suspended in time, almost asleep. Then one day, a young veteran with symptoms of shell shock (like many others) comes to her door peddling and mysteriously utters the name of her son, then leaves in a rush.

Evelyn is next. A posh girl from a privileged family who once worked in a gun factory and now works at the Pensions Exchange where day after day, she sees survivors attempting to claim the benefits they are owed. Evelyn is moved by rage, her anger almost a touchable thing. She suffered great losses during the war including that of the man she loved. She can’t move on, doesn’t want to move on, because nothing seems real enough to her.

Hettie is the youngest, a dance instructress at the Palais, living day by day, hoping for more. In comparison, Hettie’s life has been almost untouched by war. Her brother came back home with mild symptoms of shell shock but she doesn’t even know where he fought or the details of his tour. She doesn’t really care. Hettie is tired: tired of having to think of others, of having to give her mother half of her earnings. She wants a better, freer life.

It is at first unclear how the lives of these women intersect but as the story moves forward and the body of the Unknown Warrior approaches its final resting place, the lines that separate them become less and less clear.

I’ve wanted to read Wake ever since I first heard about it, learning that it was from the perspective of female characters as it’s exactly the type of narrative that interests me. However, I was admittedly wary of it for many reasons. How do you tell a story about World War I from the perceptive of the ladies left behind without making it All About The Men? But at the same time, how can you write a story that is primarily about ladies without forgetting the cost, the loss, the lives of the men who fell and the lives of the men who came back to a completely different world?

Apparently you do it by being called Anna Hope. It is astonishing how…rounded this book is. No character, male or female, is shortchanged. No story is unworthy to be told, no want or desire or hurt, goes unremarked. There is a lot of compassion and sympathy here for all characters regardless of how much or how little they have supposedly suffered because – and this should go without saying – it is simply not a competition. In here, the concept of Total War is wholly, deftly explored by the author. It is important to acknowledge the unthinkable suffering of the soldiers just as much as it is important to acknowledge that those left behind were equally fighting a war, only in different trenches. There is no judgement whatsoever here regardless of what characters have done, are doing or will do.

The characters. Oh my goodness, the characters. I am hard pressed to say which story touched me the most or which of these women was my favourite. I’d probably say Evelyn in all of her glorious, amazing anger and bitterness:

How dare he? As thought something were wrong with her, as thought she were ill, and that is why she has dared to question – question any of them. As if all of it, the whole bloody war, were nothing more than an extended gentlemen’s club.

Because why wouldn’t you feel that way? Her constant search for something that is real, heck even her own concept of what constitutes “real”, is fascinating.

Post-War Britain is brilliantly shown in terms of class divide, in societal changes, the different ways that people have found to cope (or not) with the aftermath of the War. It is a nation in the middle of a mourning process and “wake” and its different meanings is literally the best possible word to be used here.

Wake of course offers a limited point of view. Not only because it is restricted to England but also because it provides only but a snapshot, a glimpse of those characters and of this nation in 5 short days. It ends as the Tomb of the Unknown Warrior is unveiled and as such there is a measure of hope to be found and the hint to a healing process but it does not provide lasting answers or easy solutions. In fact, it ends mid-sentence which I found to be a stroke of genius.

Quite frankly, it’s hard for me to believe that this amazing, touching book is a debut novel. Absolutely recommend and already on the run for a spot in my top 10.

Notable Quotes/Parts: I love this passage:

“I see so many women here,” she says, “and they are holding, all of them. Holding on to their sons or their lovers or their husbands, or their fathers, just as surely as they are holding on to the table here,” she gestures with her hands. “They’re all different but all the same. All of them are afraid to let them go. And if we feel guilt, we find it even harder to release the dead. We keep them close to us; we guard them jealously. They were ours. We want them to remain ours.” There’s a silence. “But they are not ours,” she says. “And in a sense, they never were. They belong to themselves, only. Just as we belong to ourselves. And this is terrible in some ways, and in others…it might set us free.”