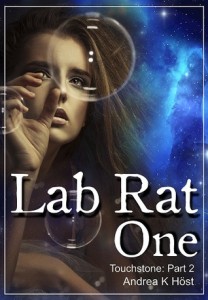 In the months since Cassandra Devlin walked onto another planet, she has grappled with everything from making blankets to helping psychics battle the memories of monsters. Not able to find a way home, she has instead gained friends and a purpose.

Unfortunately, that purpose brings with it the pressure of being more than a little valuable, and those she has befriended are also her guards, ordered to explore and control her abilities to find out just what it is a touchstone can do.

Test subject was not the career path Cass had been planning.

With no privacy, too-frequent injuries, and the painful knowledge that she must always be an assignment to her Setari companions, Cass can only wish for some semblance of normality and control.

And as her abilities become more and more dangerous, tests and training may be the only thing capable of protecting Cass from herself.

Stand alone or series: Book 2 in the Touchstone Trilogy

Why did we read this book: Ana has been Andrea K Höst‘s fan for a while now; then Ana dared Thea to read one of her books for this year’s Smugglivus Feat of Strength and the rest, as they say, it’s history.

Lab Rat One is book two in the Touchstone trilogy, sequel to Stray. It’s been a few months since I’ve read the first book but the story has truly stayed with me and I was glad when Thea – after reading Stray for her Smugglivus Feats of Strength – suggested a joint.

Lab Rat One, continues to follow Cass’ journal entries disclosing her new life on a different planet. The previous book established the impossibility of her going back home – at least for now – as well as the fact that she is a touchstone, a person with the ability to enhance the powers of those around her which makes her an exceptionally valuable stray. Her life is now one of constant monitoring and training with the military members of the Setari, odd visits to the older world she opened up in book 1, and the continuous need to control and understand her abilities. Especially when it becomes clear how dangerous her abilities truly are to herself and to others.

The strongest aspect of these novels to me (and this became so much clearer after reading book 2 now) is the narrative voice. Written as journal entries that Cass writes for her eyes only, her voice when writing is stoic, almost detached. But it couldn’t be any other way: it is realistic that a person writing journal entries after the fact no longer experience the same levels of emotion. The journal entries are structured and thought-through and this is why the moments when Cass allows for a more emotional narration to seep through, when fear, or loneliness, or her longing for true friends or for more attention from Setari captain Ruuel, they are all the more impacting.

Lab Rat One is such an appropriately named book too: part tongue-in-cheek, part unfortunate reality, Cass is aware of her importance as touchstone; lab rat is exactly what Cass feels she is, doesn’t matter that she has developed a true bond to her new home and the people who work with her. This is why it becomes so essential for her to prove her worth, to maintain an attitude of stoicism and determination so that she can feel she is more than mere lab rat. The book is almost uneventful and as such it has a quiet quality that allows for the entries to become routine. To me, this enforces its value by allowing the characters and the story to really create roots.

Training is extremely strenuous and her constant visit to the medical quarter an unfortunate side effect: Cass is plagued with headaches and terrible nightmares. Her one constant source of comfort are her dreams about Ruuel but her realisation that she might have strong psychic powers that make dreams and nightmares actual reality allow for those dreams to become a constant source of worry. I love how the romance is played out in the book: developing from shy crush to constant entries in the journal to…well, suffice it to say I might have read the last four pages of this book three times in a row soon after I finished it.

And you can bet we will be reading the last book, Caszandra very, very soon. And we will make sure to also read the Gratuitous Epilogue at the same time to avoid this unnecessary torture of having to wait.

I will preface my part of this review by saying: why did it take me so long to read Andrea K. Höst? What the HECK is wrong with me? I devoured Stray just a few short weeks ago, and then immediately coerced Ana into a joint review of Lab Rat One because holy crap, this trilogy is fantastic. (Right now I’m having a very hard time trying to resist reading Caszandra – damned review queue obligations!)

Like Ana, I am thoroughly impressed with the epistolary style of the novel and, to me, one of the strongest aspects of the series is the strength of Cassandra’s voice. Like Stray, Lab Rat One is relayed entirely in Cassandra’s diary entries, written retrospectively and in great detail. The problem I usually have with the diary entry format is one of plausibility – how likely is it that someone can REALLY recall everything that happened in a day? Why would they take the time to write it all out all over again in such minutia? How is it that a prisoner of war is allowed such personal digressions in a diary when she’s supposed to be revealing Allied secrets to her Nazi torturers?!

In the case of Lab Rat One (and the trilogy at large), however, all of these concerns are decided nonissues. You see, the planet on which Cass is stranded is home to a technologically advanced human society. Every person, Cass included, is outfitted with access to the network – a nanotech brain implant that records, connects, transmits, even translates anything and everything (think: Cass’s brain is now equipped with a nanite powered computer and hooked up to a souped up version of the internet). Cass can literally replay her day, she can log her memories, she can recall – and in some cases even discover – the most minute details. Cass’s motivation for writing everything down is also painfully, heartbreakingly real – she’s a self-proclaimed lab rat on a distant planet with no immediate possibility of ever being able to return home. While she can communicate with others and the interface provides unlimited space for recording her thoughts and feelings, it’s also incredibly invasive – because of her status as a Stray, and because of her value as a touchstone, high-ranking Setari and government officials can access her logs (one of my favorite moments, when Cass discovers this, is her quip that she will find it hard to masturbate or go to the bathroom again, let alone have intimate relationships). Cass’s only real privacy is with the written word. In her diary entries, she finds an outlet to divulge her fears, hopes, and desperate wishes – it’s the only place where she can be truly alone with her thoughts. That’s powerful stuff.

The epistolary format is also so fascinating because it also means that Cass is an unreliable narrator, inherently. She describes the parts of her day that are interesting only to her; she provides her own personal interpretation of the actions of those around her. While Cass has no reason to lie in her diary, I think it’s absolutely fascinating to glean the hidden inferences behind the stories Cass decides to write up, and they way she chooses to tell those stories. It’s kinda like when the Setari are frustrated when Cass doesn’t tell them about a connection she’s made in her head about Earth animals and new alien wildlife – like any human, she’s selective with the information that is important and worth telling, and this HAS to apply to her diary as well. SO, when Cass tells us how she struggles to focus on the job or her interpretations of how others perceive of her (looking at you, Ruuel), you KNOW that there’s more going on with the story. And on that note, I actually disagree with Ana when she says that Cass’ voice is stoic or detached – I actually think just the opposite. Cass is a passionate narrator, who divulges details but also her feelings beautifully in the book, whether those are feelings of inadequacy or frustration, or happiness. I adore her writing so, so much.

And I haven’t even touched on the actual science fiction elements or plotting yet! While it is Cassandra’s narrative that drew me into this series, it is the science fictional elements and the incredible danger facing this world that were so gripping, so entrancing to me. Tare, Cass’s new home, faces terrible danger – the Ionoth (monstrous ghosts of energy) are increasing in the size and scale of their attacks, breaching Ena and threatening life. Luckily, Cassandra’s abilities have allowed her to open Muina (the planet Tarens consider their ancestral home) for exploration and recolonization – provided she can figure out how to get a handle on her newfound powers as a touchstone. Add to this mix psychic military units called the Setari (aka Cassandra’s friends), the virtues and dangers of ever-present surveillance, nanotechnology, and the ability to travel between spaces of energy and reality? Well, you’ve got a bonafide SFF party. In Lab Rat One we learn more of the doomed Muinans, and we see Cass’ struggles with her own burgeoning and unknown abilities as a touchstone) – the developments are drastic, to say the least.

The ONLY thing I can find fault with in Lab Rat One is the amount of time Cass dedicates to brooding over Fourth Squad leader Ruuel. Cass has a HUGE crush on Ruuel, but more than that she senses a connection to him – even though he never talks to her unless it’s absolutely necessary, there’s clearly something between them. Now, as a former teenager who kept a diary, I am very familiar with brooding over a crush and indulging that brooding via the written word. I totally get it. That said, the brooding is lengthy and runs throughout the whole book, and there were times when I would want to give Cass a firm grip and tell her to deal with her feelings and move on – which is entirely unfair. It is a journal, and where else can she divulge these feelings?! Still, it was a teensy bit annoying. (Even though I don’t fault Cass or the narrative.)

And that is that – I’ve rambled long enough. Suffice it to say, Lab Rat One is even better than Stray, and I cannot wait to see what happens next in Caszandra. If you haven’t read Andrea K. Host yet, please GET ON THIS IMMEDIATELY. Absolutely phenomenal and I cannot wait to read all the things that Host has ever written.

Additional Thoughts: Unrelated to the book itself but if you haven’t seen this fantabulous post about SFF written by women (with an incredible list of old, new and forgotten) that Andrea K Höst wrote for our SFF in Conversation series, please do.

Reading Next: The Girl With All The Gifts