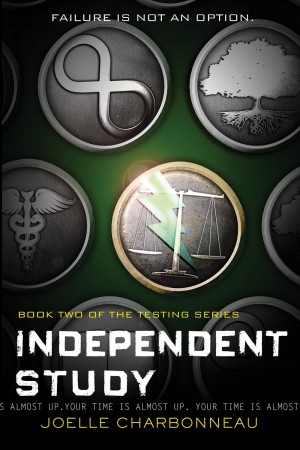 In the series debut The Testing, sixteen-year-old Cia Vale was chosen by the United Commonwealth government as one of the best and brightest graduates of all the colonies . . . a promising leader in the effort to revitalize postwar civilization. In Independent Study, Cia is a freshman at the University in Tosu City with her hometown sweetheart, Tomas—and though the government has tried to erase her memory of the brutal horrors of The Testing, Cia remembers. Her attempts to expose the ugly truth behind the government’s murderous programs put her—and her loved ones—in a world of danger. But the future of the Commonwealth depends on her.

Stand alone or series: Book 2 of the Testing Trilogy

Why did I read this book: I thoroughly enjoyed The Testing, book 1 in this series. I mean, I really liked it. A LOT. So much so, that Independent Study was one of my most highly anticipated books of 2014 – so imagine my glee when I stumbled across an early copy at my local bookstore! I’ve been in the mood for a page-turning dystopian series, and The Testing certainly fits the bill.

**NOTE: This review contains unavoidable spoilers for The Testing. If you have not read book 1 and want to remain unspoiled, LOOK AWAY. You have been warned.**

Malencia “Cia” Vale has survived The Testing and has earned her way into the prestigious Tosu City University as a student. Her first year of studies, however, is plagued by phantom memories of her time during the Testing. Aided by the transponder (and secret recorder) she received from her older brother Zeen as a parting gift, Cia has access to whispered, desperate messages from herself – a recording of her experiences throughout the Testing. And unlike her fellow classmates, Cia knows that the cost of failure is death.

After finishing her freshman entrance exams, Cia is assigned to an unexpected career path and once again finds herself in a competition to excel, or pay the ultimate price. This time, though, Cia is prepared for the violent brutality that awaits. And, while she’s reluctant to trust anyone, Cia quietly starts to work for a faceless core of rebels who vow to stop the Testing, to bring down its supporters, and to reform the Government.

You know that phrase, if it ain’t broke, don’t fix it? Well, that also happens to be the motto for the second book in the Testing trilogy by Joelle Charbonneau, Independent Study. If you liked The Testing, the violent, manipulative mind games, the literally cutthroat competition to get to the top of the class? You can expect plenty more of the same in book 2. In this installment, Cia’s world broadens from her naïve and insular views as an outer Colony girl headed for the Testing. We learn about the tension within the government between the President and the head of the University, the precarious edge upon which the entire country rests with the threat of political upheaval and all-out rebellion. On a more micro level, we also learn what fate awaits those students who have passed their initial tests and make it to University – after killing just to get in, classes should be a breeze, right? WRONG. Cia’s experiences trying to not only survive but excel at initiation involve booby traps, poisonous snakes, twisted scavenger hunts, and jealous (and vindictive) classmates. Hence: more of the same action and stakes as book 1.

Independent Study is a curious beast for me, personally. I know that the book is an unabashed Hunger Games copycat – down to the length of the novels, and the package of the books themselves. It’s hard NOT to notice or call attention to this (not that I blame HMH Books for Young Readers or Charbonneau – The Hunger Games trilogy is, obviously, a phenomenal success and why wouldn’t you try to tap into that market). That said, the comparison between the two series’ – and, more importantly, their heroines – isn’t actually a bad one. Let’s talk heroines for a second. Though they both face life or death stakes and have serious trust issues (not to mention both are from the literal outer fringes of their respective societies), heroines Cia and Katniss are actually distinctly different creatures. Cia is to applied physics as Katniss is to archery; Cia internalizes and carefully evaluates the many outcomes of a potential action, while Katniss rashly charges ahead and reacts to the immediate threat. Both heroines are fantastic in their own ways, but I kinda love that unlike other current YA dystopias, Cia’s focus is on mental acuity – not solely street smarts or physical prowess, but actual, hardcore, textbooks and test scores school smarts. I confess, I adore that about this series, and about protagonist Cia.

I should also mention, on the Hunger Games/other popular YA dystopia comparison front, while the setup for the book is entirely familiar (e.g. kids fighting to the death, the tension between the City haves, and the outer Colony have-nots), the fundamental premise of The Testing series is actually really cool, and different. Think back to the tension of taking midterms and final exams, or preparing for capstones or dissertations – and multiply that by DEATH. That’s Independent Study, for you. The hyperbole is… well, hyperbolic, but I kinda love that exaggeration.

On the negative side, I KNOW that there are many flaws with this book and this series overall. The most glaring issue with Independent Study is how the worldbuilding doesn’t actually make sense. The entire novel hinges on the idea that if the Government (and the people?) knew just what The Testing and University entailed, they would bring the system crashing down. On its face, this seems ridiculous. HOW does no one in government know what happens during University or the Testing? In order to secure a government position, each official must have graduated from University! That, or the exceptionally low graduation (or survival) rate of University students should have raised serious red flags – we’re talking about huge percentages of every incoming class getting “reallocated.” Worse, some of those University failures are kids of hardworking University graduates and Tosu City dwellers. Surely one of those many parents would have noticed that they hadn’t received any communication from their University-going children in years? No one questions this? COME ON NOW.

There’s also the larger problem of Cia’s Mary Sue-ish heroine status. She’s not only smart, she’s at the top of her class, selected as a leader, and figures out basically every problem thrown her way without fail. I’m not gonna argue with the criticism that Cia is too good to be true – that said, I would rather have a hyper-competent, dedicated, intelligent heroine calling the shots than the usual brash act-before-she-thinks YA heroine any day. AND I should also mention that while the book has its cheeseball moments (melodramatic inner monologuing), I also appreciate that Cia is in a dedicated relationship with love interest Tomas from book one, that the drama that unfolds between them is actually merited, and despite that drama, the two are in love and that is that. (ALTHOUGH, did anyone else get an “OH CRAP I think Charbonneau is gonna try to love triangle us” feeling by the end of the book? NO. PLEASE, NO.)

The thing about Independent Study (and this series overall) is, it works. For me, at least, it works. I love the way this book unfolds, the twist at the end of the novel (unexpected and ridiculous but also super cool). The Testing series is addictive, dystopian fun, and I’ll absolutely be back for Graduation Day (if only I had a copy in my hands right now!). Definitely recommended for fans of The Hunger Games and Divergent, looking for the next great thrill – with a heroine who kicks ass with math and science.

I slide the cool material of my shirt over the five long, jagged scars on my arm and examine myself in the reflector. Blue, long-sleeved tunic. Gray pants. Silver bracelet with a single star.

The star and the smudges of fatigue under my eyes mark me as an entry-level University student. My fellow classmates show similar signs of having studied late into the night for today. After six months of taking the same preliminary classes, all twenty of us will be tested and sorted into the fields of study that will serve as the focus for the rest of our lives.

My chest tightens. I used to enjoy taking tests. I liked proving that I had learned. That I had worked hard. That I was smart. But now I am not sure what is real or what the consequences of a wrong answer will be. While my classmates are concerned about the test affecting the years ahead, I worry I will not survive the day.

Reading Next: Lab Rat One by Andrea K. Host