Who: Aishwarya of Practically Marzipan, who blogs about Science Fiction, Fantasy, Children’s books and Indian writing. Her Twitter feed is pretty awesome too.

Please give it up for Aishwarya, everybody!

One of the reasons this is a post about work in translation is that William Weaver died this year, and when I was fifteen and books had suddenly become important again (I stopped reading for a few years in my teens—in retrospect I think I would recommend this) Weaver’s translations of Umberto Eco and Italo Calvino[1. The Dung Kai-cheung book I talk about in this post cites both of these authors. This may be one reason why I love it. ] played a big role in my working out what I liked. My tastes have expanded considerably since I was a teenager (I like Dickens and Regency romances now), but they haven’t fundamentally changed, and translated works, by Weaver and by other translators, played a major role in how they were formed.

I didn’t make a conscious effort to read works in translation in 2013—though I think I will next year. I was lucky enough to be on the jury for the Science Fiction and Fantasy Translation Awards, and perhaps I was just paying more attention. But some of the best things I read this year were translations. There was Andrey Kurkov’s Death and the Penguin which is bleak and absurd and perfect. Uday Prakash’s erudite, angry, all-encompassing The Walls of Delhi. Bama’s Harum-Scarum Saar and Ajay Navaria’s Unclaimed Terrain, two collections of stories about caste in India that are both brilliant yet could not be more different. Hideo Furukawa’s Belka, Why Don’t You Bark? Which is about dogs and war and space and foulmouthed young girls, and Padmarag by Rokeya Sekhawat Hossain, who also wrote feminist science fiction in early 20th century Bengal. Shimon Adaf’s Sunburnt Faces, which is (among other things) about growing up reading, and to discuss which I’m still struggling to find the words. But here are three that stood out: 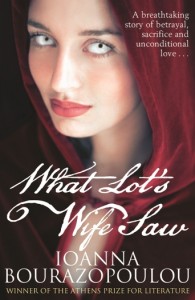 This is, at various points, post-apocalyptic science fiction, religious allegory, murder mystery and puzzle book. Twenty-five years before the events of the novel the Dead Sea rose and drowned huge swathes of Asia, Europe and Africa, while also revealing an addictive violet-coloured salt. Access to the salt is controlled by the Consortium of Seventy-Five, and the ecological wasteland where the salt is mined, the Colony, has seen some alarming recent events. Phileas Book, inventor of an entirely new sort of crossword, is hired to work out what really happened. What Lot’s Wife Saw isn’t perfect; it’s less taut in some places than others and I’m not sure the style of the prose (or possibly Yiannis Panas’s translation) works for the letters. But it’s smart and so ambitious and I can’t not like books that are both of those things.

Dung Kai-cheung, Atlas: The Archaeology of an Imaginary City: 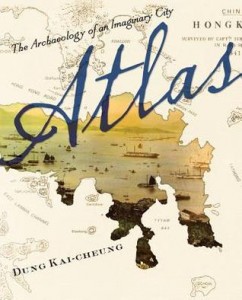 I described Bourozopoulou’s book in terms of the genres it plays with. It would be impossible to do the same with Dung Kai-cheung’s work, which refuses even the broader conventions of fiction and nonfiction. Victoria isn’t Hong Kong but it is really, or maybe Hong Kong isn’t Hong Kong (but it is really). Atlas plays with the idea of how we imagine cities, particularly those of us from parts of the world that were formerly colonised. It’s fiercely, joyfully intelligent; the sort of book that makes me have to get up and pace the room every few pages. It’s exhilarating the way a walk in extreme weather is exhilarating—and it’s probably telling that all my failed attempts to talk about how good it is involve me not being able to stay still. It won the SFF Translation award (the author is credited alongside Bonnie S. McDougall and Anders Hansson for the translation). It is probably the best thing I read this year.[2. “Probably”, only because there was a new Karen Joy Fowler book out this year as well. It’s called We Are All Completely Beside Ourselves and it is amazing. ] 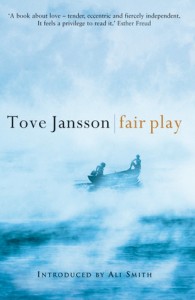 I didn’t grow up on the Moomins, and I envy children who did. Even as an adult, Jansson’s children’s books are so vast and lonely and loving as to make me cry. It turns out that her books for adults are all of these things as well. Fair Play (the English translation is by Thomas Teal) is about Mari and Jonna, elderly artists who work in studios on opposite sides of the same building and sometimes go on holiday together, or live in a tiny cottage on an island. They fight, they struggle with their own work or suffer through the other having an artistic strop, they give each other advice and comfort and space. It’s easy to read this as autobiographical (Jansson lived for most of her life with her partner Tuulikki Pietilä) but when the characters are so careful to respect one another’s boundaries, I wouldn’t want to assume anything. It doesn’t matter, Fair Play is the story of two women who love their work and love each other, quietly and fully.

Smugglivus 2013 Guest Blogger: Liz Burns of A Chair, A Fireplace and a Tea Cozy