Who: Celine Kiernan, author of the Moorehawk trilogy and this year’s Into the Grey (which Ana loved). 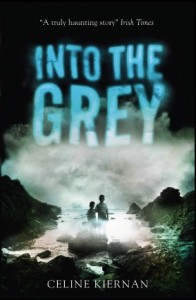 Of Nomelicious Treats and Foody Cheer

Anyone who has read my books will know that my characters are rather fond of comforting each other, mending each other, or just plain communicating with each other through the sharing of food. As these End of Year Holidays are—for most of us—a time of feasts between family and friends, I thought I’d share my favourite feasting or food based moments from five of my favourite childhood books… and also draw you a gift based on one of them! 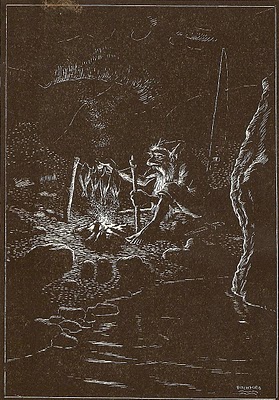 My first choice is not quite so sumptuous nor feast-like as the rest, but BB’s wonderful Little Grey Men books made such an impression on me as a kid. Every morsel that the Little Grey Men ate had to be hunted or fished or foraged. They even had to make their own wee frying pans out of mussel shells or (eventually) the foraged copper from shotgun cartridges! I adored all this detail and by the time the men got around to actually eating I was just as hungry as they, and enjoyed every morsel right along with them. (BB was aka D J Watkins-Pitchford – and drew the stunning illustrations for each book). Here they are, Dodder, Baldmoney and Sneezeworth, the last gnomes in England, getting themselves some honey:

Dodder could hardly see Baldmoney and Sneezeworth for the bees; they came out in such a swarm, they were like a black swirling dust storm round the entrance to the nest. Baldmoney got his hand in at last and broke off piece of the crisp, papery comb, full of lovely amber treasure. He put them in a dockleaf and Sneezeworth passed it down. Baldmoney was black with bees. They crawled all over his head and hands, and some got inside his jacket and down his neck, and some became entangled in his beard, and they stung and stung and stung, but Baldmoney didn’t mind a bit!

Alice Through the Looking-Glass 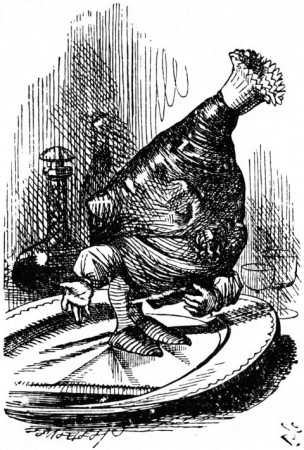 And then on to my absolute favourite book from when I was a child, the much neglected Alice Through the Looking Glass. Who could have a discussion of feasts without referencing the Red Queen’s bonkers party at the end of that book? Punctuated with John Tenniel’s iconic drawings, this scene alone has influenced many a writer down through ages. (I distinctly recall it sending delicious shivers down the spine of an eight year old me):

`You look a little shy; let me introduce you to that leg of mutton,’ said the Red Queen. ‘Alice—Mutton; Mutton—Alice.’ The leg of mutton got up in the dish and made a little bow to Alice; and she returned the bow, not knowing whether to be frightened or amused.

`May I give you a slice?’ she said, taking up the knife and fork, and looking from one Queen to the other.

‘Certainly not,’ the Red Queen said, very decidedly: ‘it isn’t etiquette to cut anyone you’ve been introduced to. Remove the joint!’ And the waiters carried it off, and brought a large plum-pudding in its place.

`I won’t be introduced to the pudding, please,’ Alice said rather hastily, ‘or shall we get no dinner at all. May I give you some?’

But the Red Queen looked sulky, and growled `Pudding—Alice; Alice—Pudding. Remove the pudding!’ and the waiters took it always so quickly that Alice couldn’t return its bow.

However, she didn’t see why the Red Queen should be the only one to give orders, so, as an experiment, she called out `Waiter! Bring back the pudding!’ and there it was again in a moment like a conjuring trick. It was so large that she couldn’t help feeling a little shy with it, as she had been with the mutton; however, she conquered her shyness by a great effort and cut a slice and handed it to the Red Queen.

`What impertinence!’ said the Pudding. `I wonder how you’d like it, if I were to cut a slice out of you, you creature!’

It spoke in a thick, suety sort of voice, and Alice hadn’t a word to say in reply: she could only sit and look at it and gasp.

`Make a remark,’ said the Red Queen: `it’s ridiculous to leave all the conversation to the pudding!’

The Mouse and His Child 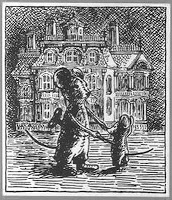 As a child, I may not have understood everything Russell Hoban was trying to explore in this extraordinary book, but I was blown away by it nonetheless. Each subsequent reading down through the years has given me more and more. What a gift to have left the world – a book that keeps on giving no matter how often it’s read. Here is the lovely, thread-bare triumph of warmth that is the Mouse and his Child, and all their many varied friends, celebrating Christmas and the New Year in the home that tenacity and love has built them:

All of that expansion and amplification, however, was still in the future. For the present the little family, having worked long and hard to make a success of the hotel, had reached the time of year when they might relax a little and enjoy the fruits of their labours. Fall had long since gone; the hickory stood stark and bare, and brown leaves rattled on the oak. Snow lay on the roofs and chimneys of the dolls house, and icicles hung from the eaves. The Dog star took his wintry road across the glittering night sky, the sign swung creaking to the north wind’s blast, the coloured windows threw their green and blue and amber tints across the gleaming whiteness of the platform, and the tin-can stove in the parlor glowed cosily as the year drew to a close. It was then the family found the leisure in which to grasp for the first time the dimensions of their happiness, and they felt themselves too small a group to contain it all.

So it was now, on Christmas Eve, while the bells of the town rang out their carols and the night was bright with stars, the mouse and his child paced the platform with the heavily gloved frog, listening to the jovial bub of the gathering inside the house.

Ah, Brian Jaques, your lovely Redwall books are the most sumptuously laden of all, with feasts and feasting and deliciousness galore. The Great Redwall Feast, delightfully illustrated by Christopher Denise, is every lovely meal of every Redwall book rolled into one delightful party:

And finally I chose, not a novel but Hans Christian Anderson’s epic short story, The Snow Queen. Gerda’s fantastic quest down flower-laden rivers, though robber camps and palaces, and finally into the great frozen tundra of the Queen’s domain, has lived with me since the day I first read it. There’s so much to love and remember about the characters we meet: the talking crow, the old lady, The fey prince and princess – but one character stands out from the rest for me, and that’s The Robber Maiden. Wild, fierce and adorably amoral, she is a contrast and a compliment to Gerda’s wide-eyed innocence and stoic determination. I simply adore them both; which is why I’ve chosen to draw them as my Smugglivus giveaway! Here they are, Gerta and the Robber Maiden in the Maiden’s castle with all her dogs and her crazy pigeon collection, wrapped in furs as the pot of rabbit stew cooks over the fire. 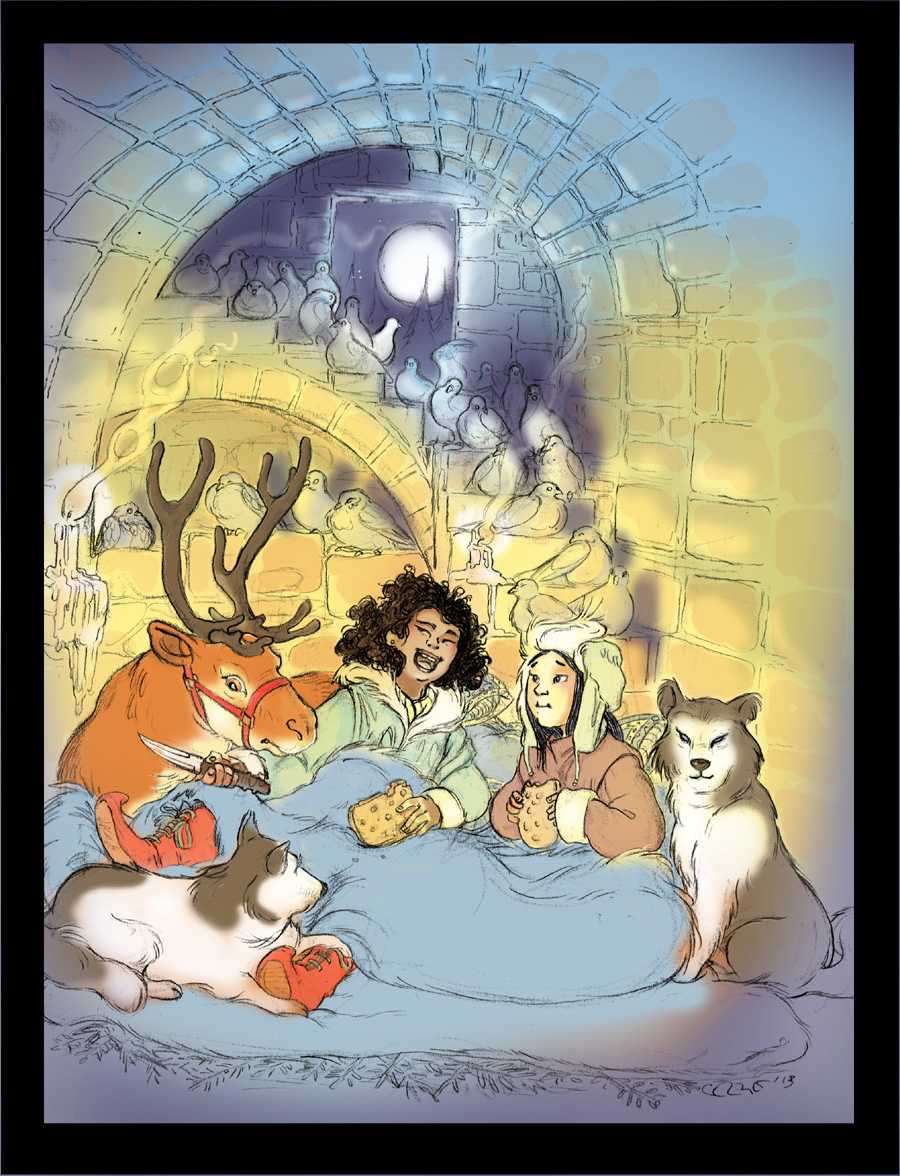 I hope you like it. All you have to do to win it is let us know what is your favourite literary feast or meal.

We have a copy of Celine’s rendition of Gerta and The Robber Maiden illustration up for grabs! The contest is open to all and will run until Sunday December 29 at 12:01am EST. To enter, use the form below.