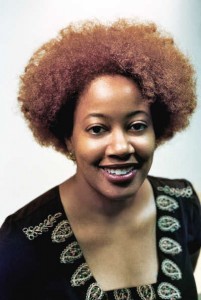 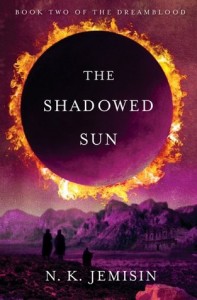 Please give a warm welcome to Nora, folks!

Happy holidays again, Smugglivians! (“Smugglers” somehow feels inadequate.) As usual, finding time to read has been tough for me between the day job and working on my next literary project, but I’ve managed. Helps that there’s so much good stuff out there to check out! Here’s a few I can recommend to you, in alphabetical order ’cause I’m a Virgo and that’s how we roll.

Across the Event Horizon (Mercurio Rivera) 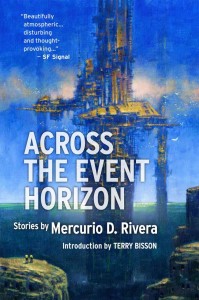 Confession: Mr. Rivera is in my writing group, Altered Fluid. Additional confession: Mr. Rivera’s stories alternately fascinate me and scare the bejeezus out of me by turns. He’s got a deft hand at rendering people in their worst moments — even people who aren’t human — and seeing what mettle, or foulness, lies within. This collection of his best stories also contains some of his most mindblowing hard science fiction, including tales of the Wergen — an alien race which has a disturbing biological reaction to humankind, and which triggers an ethically disturbing response from us in turn. But there’s more here than that: stories which make me think, and shiver, and which I can’t get out of my head. Which of course is why I want to share them with you. 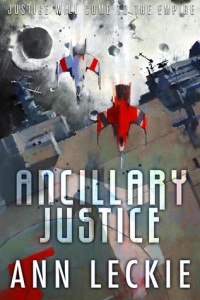 My second hard SF recommend, Ancillary Justice has been getting a lot of well-deserved positive attention since its debut. It’s rare that a book can actually challenge the way I think — that is, all books do, a little, but this one actually made stop and pull a Matrix!Keanu: “Whoa. That’s because Leckie pulls a very simple technical trick throughout the book to illustrate how a culture that doesn’t care about gender would think, and it jarred me into realizing just how heavily most of my own thinking is gendered.

The result is a story that might be a woman’s roaring rampage of revenge against the nation and queen who betrayed her… or maybe it’s a man’s tooth-clenching gritty campaign of revenge against king and country. It doesn’t matter which. What does matter is that the vengeance-seeker is a centuries-old AI who once had dozens of bodies and is now reduced to a single fragile, angry form, while the millennia-old evil ruler still has hundreds or thousands of bodies. (Makes revenge awkward.) It’s amazing, at least to me, how much a simple change freshens a fairly common trope, and the element of AI-versus-posthuman just cinches the whole thing.

The final (? I hope not!) book of the Spiritwalker trilogy dropped this year, and holy crap is it amazing. Personally I think Kate Elliott just decided that she’s been coddling her readers; time to SMASH ALL THE THINGS. There’s too much going on in this book for me to summarize, but suffice it to say that it continues the adventures of Cat Barahal, a trained spy who really just wants to be able to settle down somewhere safe with the cold-mage husband she’s finally fallen in love with, her sister who can see the future, and her adorable half-brother, who is a randy shapeshifting spirit cat. But she can’t, because her father (the Master of the Wild Hunt) and her ex (an asshole fire mage who wants to parasitically kill her husband) are chasing her back to Europa (which is like Europe except it was colonized by Africans after the Black Death) where Camjiata (think: Napoleon and Hannibal had a baby) is fomenting a revolution and dragons (actual dragons) are appearing with greater and greater frequency…

…hey, I said it was too much to summarize. Just read it, OK? 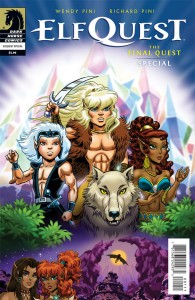 It’s back it’s back it’s back it’s back it’s back: ELFQUEST IS BACK. I grew up on this series (the whole of which you can read online for free), but wandered away after its chief visionary and artist, Wendy Pini, stopped drawing it. Some of her successors were worthy, but none of them were her. Now, however, she’s brought the old gang back for a “final” quest that’s just as beautiful and powerful as the original series. These are elves who thumb their noses at Tolkien and mythology; elves who come in many colors and whose women don’t need roles shoehorned into movies to make them relevant; elves who get high and fuck like courtesans (sex-positively!); elves who say things like You are meat to be wasted and send chills down your spine. This is one of my first true fantasy loves, and it’s back. 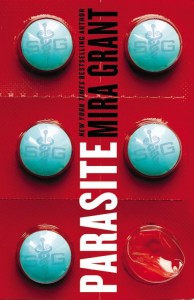 Once at a con in Boston I had dinner with Mira Grant (or Seanan McGuire, as you prefer), and I asked her what her next book was about. She just laughed evilly. That’s kind of all you need to know about this book.

But if you need to know more, I’ll just throw this out there: commercially-produced intestinal parasites. In the future, American solves its healthcare problem not by finally getting single payer and improving our educational system to make smarter doctors/scientists, but by giving everyone their own personal genetically engineered tapeworm. …Yeah, OK, you can pretty much see how that’s not going to work out well, but it’s how you get there that matters, in this case. Not quite as mindblowing as the Newsflesh series, but hey, this is only the first book: Grant’s just getting started. 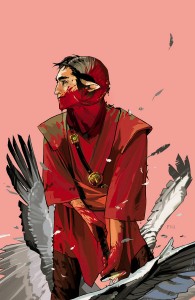 I don’t have the patience to read comics in monthly installments; I like to binge. So thankfully, the second compilation of Saga dropped this year, because the first volume blew my mind.

Once again I will attempt to summarize the unsummarizable. Romeo & Juliet in space? If Romeo was an adult and not a horny teenage putz, and if he was from a magic-wielding spacefaring species of humanoids with horns; and if Juliet wasn’t a melodramatic teenage putz, and if she was from a scientifically advanced spacefaring species of humanoids with wings. And if both of them actually survived past hooking up and had a baby, then had to flee across the galaxy with (surprisingly lovable) bounty hunters and traumatized war profiteers from a race of robots with TV-screen-heads on their trail, and if they found a ghost to be their babysitter and their spaceship was basically a living tree —

Yeah, OK, just read it. Or rather absorb it, because Fiona Staples’ amazing art just needs to be soaked in. 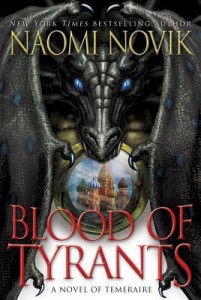 It’s amazing to me that the Temeraire saga has gotten all the way up to 8 volumes. It’s been a wild ride, and the latest entry in the series is no exception. Things start off bad when Laurence wakes up at the beginning of the book — in still-closed-to-the-West Japan, with no memory of how he got there… or the last five years, including all his adventures with Temeraire. Things go rapidly downhill even after Laurence is reunited (awkwardly) with his dragon, and the action returns to China and then rolls westward — into Russia, where Napoleon is on the march, and WINTER IS COMING. (Sorry, couldn’t help it.) Any student of history knows what happened to the Grande Armee in Russia — but with dragons in the mix, history has just been shot in the face. Also, Iskierka! I could read a whole book of just her. 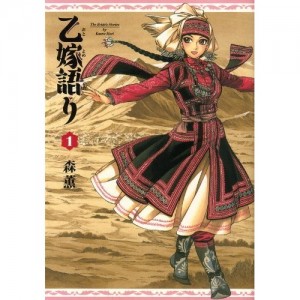 There’s so many things that could go wrong with a story set in 19th-century central Asia and focused on a 20-year-old woman marrying a 12-year-old boy. None of those things happen. I’m certainly no expert on the culture, of course; that part could be completely wrong. But what we’ve got here are fully-realized characters in a complex situation, none of them falling prey to the usual stereotypes, and it’s hard to go wrong with that.

Amir is “too old” to marry, and thus gets foisted off on a weaker clan and a husband 8 years her junior — but she decides to make the most of it, proving her worth to her new people so thoroughly and charmingly that they fight to keep her when her old clan suddenly and mysteriously wants her back. There’s no squickiness to the marriage, note, even though a lot of things hinge on Amir getting pregnant as soon as possible; once she realizes her child husband is nowhere near ready for that sort of thing, she assumes a role somewhere closer to that of his protector and advisor. (She’s almost as badass as this woman from a similar culture.) And yet it’s still sweetly romantic, because now they’ve got time to get to know and genuinely like each other. The series is up to volume 4 right now and has only gotten funnier and more exciting; I’m definitely along for the ride.

But the best part of this story is the art: OMG, I don’t know how she did it, but Mori renders all the fabrics and woodwork and textures and styles in stunning, magnificent detail. Apparently the author is something of a history geek; she also did a series set in Victorian London with just as much detail, which I intend to check out too. 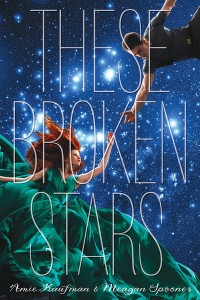 More science fiction! This one’s a YA romance too, though. I have to say this book had a slow start for me; too many tropes I’d seen before in too brief a span. She’s a meticulously-groomed overprotected heiress! He’s a war hero from the wrong side of the tracks! They fight — Well, no. That’s when it got interesting. They get stuck in a lifepod together after their spaceship has a mysterious accident, and have to rely on each other for survival after they crash-land on an uncharted planet. Even that probably sounds a bit stock, but I’m a sucker for a good survival tale, and there were a number of unexpected plot twists along the way. I think this one might be equally appealing to the romance readers and the skiffy readers hereabouts, so check it out!