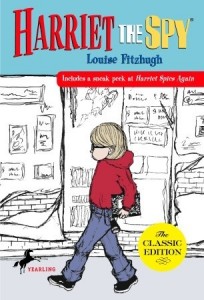 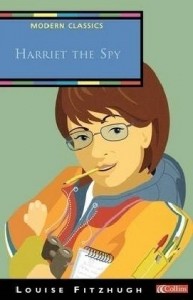 Harriet M. Welsch is a spy. In her notebook, she writes down everything she knows about everyone, even her classmates and her best friends. Then Harriet loses track of her notebook, and it ends up in the wrong hands. Before she can stop them, her friends have read the always truthful, sometimes awful things she’s written about each of them. Will Harriet find a way to put her life and her friendships back together?

Standalone or series: Stand alone but there are sequels

Why did I read this book: I’ve been hearing about this book for ages but it wasn’t until I saw September Girls‘ Bennett Madison singing its praises that I felt it was time to read it.

Sometimes you have to lie. But to yourself you must always tell the truth.
First published in 1964, Harriet the Spy is a classic children’s book that seems to encounter discordant reactions that range from loving adoration to banning attempts due to its “sets a bad example for children” content (which include the sentence quoted above). It is my first time reading it and I expect that my experience reading as an adult is wholly different from that of those who read it as children (…now that I have written it down, this statement strikes me as stating the bleeding obvious but I will leave it).

Harriet the Spy is about Harriet M Welsch, an 11 year old girl who wants to grow up to be a writer and a spy. In her head, there is very little difference between the two – she “spies” on her friends and neighbours and writes about them in her notebook. Her observations are often scathing and mean but always written for her eyes only – until her friends read it. Because the blurb will tell you nothing else beyond the above summary, I fully expected this to be a cute spy story about friendship and was completely surprised by its actual content. It involves, amongst other things, examinations of gender stereotypes, class privilege, feelings of loneliness and of being different and a brilliant – absolutely brilliant – portrayal of a girl who does not fit the mould we often expect girl characters to fit.

It seems to me that this book is kind of revolutionary – I don’t really remember ever having read a “classic” children’s book in which the protagonist is this unrepentantly “unlikeable”. Unlikeable in quotation marks because definitions are so varied – what makes a character unlikeable after all, will probably vary from reader to reader and can in itself be interpreted in a myriad of ways. Harriet is mean, contemptuous, self-absorbed and unrepentant. She throws tantrums, she is revengeful, she talks back to her parents and teachers. I love her – her “unlikeability” being what makes her likeable to me.

Beyond a personal connection though, Harriet the Spy is a brilliant book in the way that it slowly discloses a lot without making a fuss about any of it. Harriet is obviously very lonely despite having friends – her socialite parents barely have time to her, leaving her “education” in the hands of her nurse Ole Golly. The two have an amazing relationship but Ole Golly goes away to live her life, leaving Harriet grieving for their relationship. What blew my mind away is that she doesn’t come back with kind, loving words that we often expect from the sage nurse in these books to help Harriet to pull through. No, what she does is to respect Harriet as an individual and sends the type of advice that Harriet needs:

If you’re missing me, I want you to know that I am not missing you. Gone is gone. I never miss anything or anyone because it all becomes a lovely memory. I guard my memories and love them, but I don’t get in them and lie down. You can even make stories from yours but they don’t come back. Just think how awful it would be if they did. You don’t need me now. You’re…old enough to get busy at growing up to be the person you want to be.

This is the most heartbreakingly inspiring piece of advice ever.

Gender roles and stereotypes are turned on their heads. Harriet herself is a girl who dresses in what can be described as “boy clothes” (this being 1964, of course) and who wants to be a writer and a spy. Her female best friend Janie wants to be a scientist and to blow shit up. Her male best friend Sport is the nurturing one, the one who cooks and cleans and takes care of his absent-minded father. This is subversion written subtly as matter of fact.

So here you have a girl who loves to write and who is ambitious about it: Harriet never stops writing on her notebooks, she has a daily routine where she goes on her “spy route” to observe people and write about them. All from the perspective of an 11-year-old girl who is observant, astute and smart but still a child. Part of her story arc is to understand that sometimes the things she observes have meanings she can’t hope to understand just yet. Another big part is to confront other people when they realise what she is writing about. It is very interesting to see her reaction when her friends and family read her notebooks – it is not one where she feels bad about what she wrote, it is one where she is mad that she had her privacy invaded thus enforcing the idea that thoughts are different to actions – she never voiced her true feelings out loud, nor has she mistreated people despite what she thought of them. She does not act on her thoughts until people start mistreating her as a result of reading her notebooks. When the climax of the story comes, when Harriet has learned a lesson, that “lesson” is not one that makes her completely sympathetic and understanding toward other people’s feelings, but learning to be diplomatic about them. It is impossible not to fully admire that Louise Fitzhugh clearly had a vision for her story and stuck to it until the very ending. This made me think of this really brilliant post from author Courtney Summers that examines the way that our society has certain expectations about how girls should be written:

My books usually come from a place where I’m trying to explore and/or challenge the socially ingrained ideas and expectations we have of girls. They’re a response to the anger I feel about double standards in fiction, the way girl narratives are subtlely and overtly dismissed, how we penalize girl characters for either being too much of a girl or not enough of one, and the many questions I have surrounding all of this. I write my books with more questions than I have answers for, if I have any, but to me, that’s the point.

Most of my readers know I wrote CRACKED UP TO BE because the book I’d tried to get published before it got rejections highlighting the unlikability of its main character as The Issue—as if a girl can’t be unlikable and still lead the way. This remains one of its biggest problems for some of the people who have contacted me about it; they express disappointment when they discover Parker’s story is about a Mean Girl Who Falls from Grace and Gets Meaner, as opposed to a Nice Girl Who Falls from Grace and Finds Her Way Back to Niceness. Some people really struggled and are very uncomfortable with the concept of a girl being more than sugar and spice at any given moment.

I’d like to think that Harriet would grow up to be a Courtney Summers protagonist.

Finally, I’d like to conclude this mishmash of thoughts about Harriet the Spy by linking to this excellent article about the queer friendly reading of Harriet the Spy and how powerful it was/is for nascent gay readers.

In any case, this turned out to be unexpected and very thought-provoking.

Over at Kirkus: The Dispatcher by John Scalzi