Today we are thrilled to host a guest post from author Erin Bow. We’ve been fans of Erin’s since reading Plain Kate, and have been eagerly anticipating her new book, Sorrow’s Knot for a while. 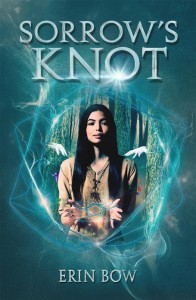 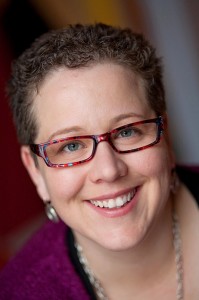 Here to talk about her Inspirations & Influences behind the new novel, please give a warm welcome to Erin, folks!

You know what’s not a great idea?

Going, alone, to a tiny cabin in the woods to work on your deeply spooky book about how the dead hunt the living down.

You know what’s even dumber?

Doing this right after watching The Walking Dead.

Now, I have to tell you that I am squeamish and easily spooked. I can’t read Stephen King. I don’t like horror movies. So it took me years to give in to the pressure of a screenwriter friend who kept telling me how good The Walking Dead was: the best pilot since Firefly, she said, and she was right. I watched that excellent pilot and then was unable to watch anything more for weeks. I wanted to — it had been so good — but I simply couldn’t. It was just too creepy. 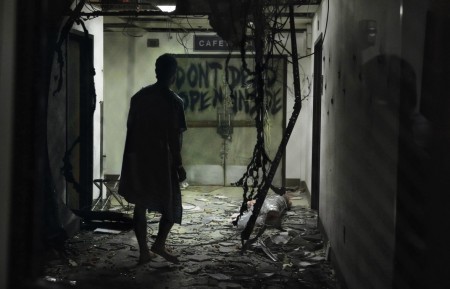 Also, I was too busy to watch a new show: my manuscript was due in a month, and I was STUCK. To get it done, to get unstuck, I needed a place where I could concentrate on it entirely — no kids, no day job, no internet, no television. To that end, I rented a cabin — actually a converted milk shed, about ten feet square — out in the middle of nowhere. It was winter when I went there. There was a huge snowstorm the first night, and an ice storm after that. I had trouble getting the door open. The trees creaked and ticked when the wind blew. The path had filled up — there were no tracks. I hoped it would thaw by the end of the week, because that was how much food I had. That scrabbling sound on the roof at night? Probably just a raccoon.

Well, I thought. This is … atmospheric. I wonder what it would take to barricade that door.

But seriously. I broke through the whole center section of the book on that retreat. I wrote about 15,000 words in three days, including the two chapters I think readers will remember, “Lost,” and “Found.” And when I needed to spook myself a bit to get the atmosphere going, I just remembered that The Walking Dead (in the pilot, anyway) is terrifying mostly by suggestion. The dark staircase in the hospitals. The fingers in the door crack. The way the doorknob…

Because what’s scarier than seeing the monster in the darkness?

Being in the darkness, and not seeing the monster.

From Harry Potter to The Dark is Rising to Percy Jackson to A Wizard of Earthsea, there are lots of young adult books about magical young people coming into their power. It’s a great metaphor for adolescence, for coming of age, so it makes sense that it turns up a lot. What I haven’t seen as much of is books where magical young people inherit a power that’s questionable or troubling. I mean, sure, Harry’s been dealt a tough hand, but there’s never a moment in the book where you wonder if the world would just be better off without wizards.

In Sorrow’s Knot, on the other hand, our heroine Otter has inherited the power of tying the magical knots that bind the dead. It’s not always a pretty thing, but it seems a necessary thing, and Otter feels destined to do it — and yet. It’s not too far into the story when Otter’s mother, the great binder Willow, first says, “There is something wrong with the knots.”

I can’t say too much about this without spoiling the book, but I will say I felt as if models for this kind of story were scarce. But fortunately you really only need one model, and I found one: Ursula K. LeGuin’s Gifts. 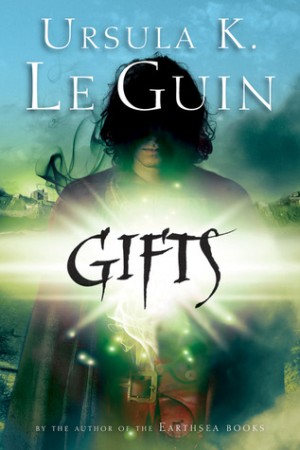 Gifts is the story of Orrec, who is born into a family with the power of unmaking: destroying things, even living things, with a glance. All the families of the Uplands have one of these gifts, which makes for a feudal, clannish world where the balance of power rests on bloodlines and the ugly powers that those lines hold.

Orrec’s gift is slow to show itself — but when it does, it’s so strong and so uncontrolled that Orrec’s father decides that Orrec must wear a blindfold. The story starts with Orrec already blinded, and spins slowly backward and forward, and is, among other things, a meditation on power — is it a good thing to have a power that’s fundamentally destructive? What does it mean to have so much power that it’s actually a burden, a handicap? Is Orrec’s power fundamentally destructive, or is there another way to use it?

Gifts is a brilliant, subtle, slow-burning story, and its influence on the arc of the story in Sorrow’s Knot is profound. I owe it a great debt.

I’ve saved the most embarrassing for last.

I thought, I truly did, that I had invented the monsters that appear in Sorrow’s Knot, the Ones with White Hands.

In a world full of formless, hungry shadows, the White Hands are the exception: they have, at least some of the time, a recognizable form. They want — they have something more than hunger. But if they touch you, you go slowly mad, and change into a White Hand yourself.

So. I was proud of the White Hands. They are creepy and subtle, and sympathetic in a way that makes them all the more creepy.

And then I began work on this essay. I remembered vaguely that I’d originally had the idea of giving the Hands their white hands after I read an old Brian Froud book, and thought that would make a nice footnote, even if it wasn’t hugely relevant. So I went digging, and I found this. 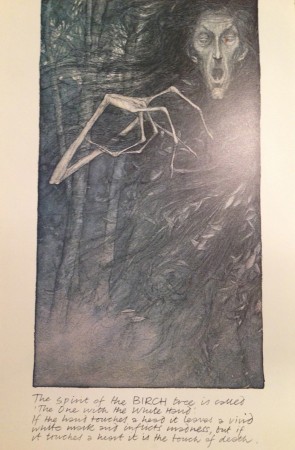 Can you read the caption? It says: “The spirit of the birch is called the One with the White Hand.” (check.) “If the hand touches a head it leaves a vivid white mark” (check) “and inflicts madness” (check) “but if it touches a heart it is the touch of death” (sort of check).

Mine have a cool backstory, though.

Um. I’ll just show myself out.

Erin Bow was born in the Midwest and studied particle physics in college, eventually working at the CERN laboratory near Geneva, Switzerland. She then decided to leave science in order to concentrate on her love of writing. She lives in Kitchener, Ontario, with her husband, James, and their two daughters. Erin Bow can be visited online at www.erinbow.com. 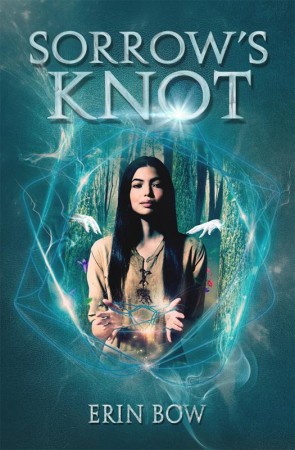 From the acclaimed author of PLAIN KATE, a new novel about what lurks in the shadows, and how to put it to rest…

In the world of SORROW’S KNOT, the dead do not rest easy. Every patch of shadow might be home to something hungry, something deadly. Most of the people of this world live on the sunlit, treeless prairies. But a few carve out an uneasy living in the forest towns, keeping the dead at bay with wards made from magically knotted cords. The women who tie these knots are called binders. And Otter’s mother, Willow, is one of the greatest binders her people have ever known.

But Willow does not wish for her daughter to lead the lonely, heavy life of a binder, so she chooses another as her apprentice. Otter is devastated by this choice, and what’s more, it leaves her untrained when the village falls under attack. In a moment of desperation, Otter casts her first ward, and the results are disastrous. But now Otter may be her people’s only hope against the shadows that threaten them. Will the challenge be too great for her? Or will she find a way to put the dead to rest once and for all?