Today’s guest is the lovely and talended, romance novelist Kate Noble. Her second book, Revealed released last year, made Ana’s top 10 books of 2009 and has just been nominated for a Rita Award. She is a regular at this here blog and you can read our interview with her as well as her mucho cool Smugglivus post. Her third book The Summer of You is out this week and Ana reviewed it here. 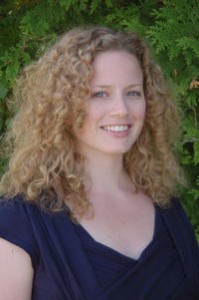 Please give it up for Kate Noble and her Inspirations for writing The Summer of You:

Thanks, Ana and Thea, for having me! I’m going to try very hard not to get to gushy and sentimental with this post, but sometimes, sentiment is the only option.

There are many, many inspirations for anything I write: a song I hear on the radio, its beat providing the rhythm for a scene, a TV character’s funny quirk that my brain randomly remembers from an 80s sitcom, or some enamel figurines I saw in a museum or on Antiques Roadshow. All these little touches are what I draw upon when writing a book, and there’s not enough time to list them all. So I’m just going to stick to the biggest inspiration I had for The Summer of You.

I have been particularly lucky to be born into the family to which I belong. Sometimes, it didn’t feel that way… 1993-1996 weren’t always fun (high school rarely is), and I am still regarded as something of a genetic oddity – I’m left-handed, the only person in my family with curly hair, and the only one who did not enter a math or science profession. But they have always supported me, always found me… interesting, and always loved me. But also one of the reasons I am terribly, terribly lucky, is that we have a family cottage. A summer house.

It has grown gradually over the last sixty-some years, from a plot of land where my grandparents once pitched a tent, to a one-room bungalow, to eventually having plumbing, a kitchen, and separate bedrooms.It sits on a small lake that serves as the center of all the day’s activities. Water skiing in the morning, sailing in the afternoon, canoeing at sunset. All of our neighbors have known each other for the whole of their lives — knows the spastic straggle-toothed kids we used to be, and the adults we are now. When we were kids, there was mischief, when we got a little older, there were first kisses and crushes. And now, the next generation is starting to begin the same cycle. Spending at least a little time at the cottage every summer binds my family together – which considering we are spread out across the country, is something of a feat. As one of the few constants in my life, it is therefore a huge influence. 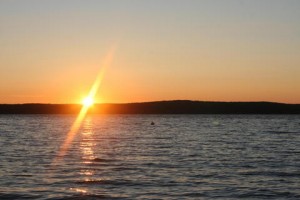 My lake. Can’t you smell the serenity?

My heroine, Lady Jane Cummings, leads a very chaotic life. Trying (to her frustration, unsuccessfully) to care for her ailing father by day, and running from party to party in London by night. To slow her down, I decided to send her to her own version of my summer cottage, in the Lake District of Northern England.

Of course, being the daughter of a duke, her cottage is bigger than mine.

Jane may escape the whirl of London, but she can’t escape people altogether. She’s got her own neighbors, who haven’t seen the duke and his family (by far the most illustrious residents of the area) in five years, and are therefore immensely curious about Jane’s life. Nor can she escape the weight of her family: her father’s memory is beginning to fail him, and her brother Jason could write a textbook on being irresponsible… if he wasn’t so lazy.

And she’s got one hell of a sexy neighbor in Byrne Worth.

Byrne, the brother of Marcus Worth, my hero from Revealed, is a bit of a mess. A war hero, he sustained a wound to his leg that left him limping and in pain. The laudanum prescribed to numb his leg also numbed his existence for a while, and he is just now trying to find normal again. I felt he needed a place like the lake as much as Jane did.

Jane and Byrne have met before in London, but their crossings then were brief, and both were preoccupied with…erm… other things (and if you want to know the ‘other things’, go read Revealed). But now, slowed down by the pace of life in the country, they have the chance to get to know each other… and themselves, as they are now.

Because, at its core, this book is about confronting change. How we reconcile our younger selves to who we grow up to be. Some people resist change, some people embrace it, some stumble through. The lake, the cottage, serve as a constant. A source of peace — something that doesn’t and won’t change, as Jane, Byrne, Jason, and everyone else makes their way to who they will be next.

About the Author: Kate Noble love books. Romances especially. But, being born into a family of doctors, scientists, and mathematicians, she didn’t discover she was adept at writing until, oh, about junior year of high school. Which came as something of a relief, as she was hopeless at memorizing the Latin names for all the bones in the human body. The Heisenberg Uncertainty Principle eludes her to this day.

Kate Noble lives in Los Angeles. The Summer of You is her third book.

And now for the giveaway! Ana, Thea, take it away! 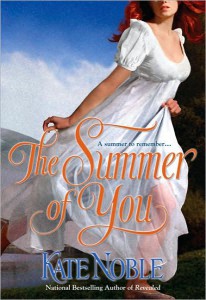 Lady Jane Cummings is certain that her summer is ruined when she is forced to reside at isolated Merrymere Lake with her reckless brother and ailing father. Her fast-paced London society is replaced with a small town grapevine. But one bit of gossip catches Jane’s attention- rumors that the lake’s brooding new resident is also an elusive highwayman.

Jane must face the much discussed mysterioso after he saves her brother from a pub brawl. She immediately recognizes him from London: Byrne Worth, war hero and apparent hermit-whom she finds strangely charming. The two build a fast friendship, and soon nothing can keep this Lady away from Merrymere’s most wanted. Convinced of his innocence, Jane is determined to clear Byrne’s name-and maybe have a little fun this summer after all.

We have two copies of The Summer of You to giveaway. In order to enter, leave a comment on this post telling us which was your favorite summer holiday. Contest is open to ALL and will run till Saturday April 10th 11:59pm (PST). We will announce the winner next Sunday in our weekly stash! Good luck!