Today we are thrilled to bring you a special edition of Old School Wednesdays in conjunction with Hodderscape and the Hodderscape Review Project:

Here’s how it works: On the first of every month (or the Friday before, if it falls on a weekend), we’ll announce our Review Project title for the month, and talk a little about why we’ve chosen it. The book may be an undisputed classic. It may be something you’ve never heard of. It may (or may not) be a Hodder publication.

Over the course of the month, we’ll feature reviews of the book from our Review Project participants. Each participant has been chosen because of the honest, thoughtful, critical consideration they bring to the reviews they publish elsewhere.

This month’s book is The Crystal Cave by Mary Stewart, an author I (Ana) always wanted to read. 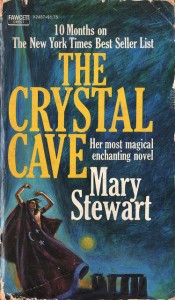 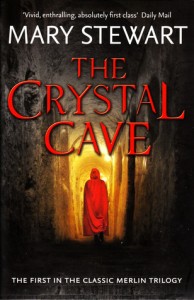 Fifth century Britain is a country of chaos and division after the Roman withdrawal. This is the world of young Merlin, the illegitimate child of a South Wales princess who will not reveal to her son his father’s true identity. Yet Merlin is an extraordinary child, aware at the earliest age that he possesses a great natural gift – the Sight. Against a background of invasion and imprisonment, wars and conquest, Merlin emerges into manhood, and accepts his dramatic role in the New Beginning – the coming of King Arthur.

Standalone or series: Book 1 in a trilogy

How did we get this book: Review copy courtesy of Hodder

The Crystal Cave is the first in Mary Stewart’s Arthurian trilogy from Merlin’s perspective. This first instalment concerns itself with Merlin’s birth, childhood and early adulthood leading up to his role in the conception of King Arthur.

In the aftermath of the Roman withdrawal from its shores, fifth century Britain is a divided land of minor Kingdoms and diverse languages and religions.

The bastard son of a Welsh Princess, Merlin grows up in his grandfather’s stronghold in Wales where he is shunned and mostly ignored. He has a keen intelligence and a passion for learning and tries to absorb knowledge any way he can. Just like his mother, he has the Sight and very early it is made clear to him that he has a Destiny, one that will put him a path intrinsically connected to that of a united Britain.

I am not usually a fan of Arthurian Sagas but the idea behind The Crystal Cave sounded promising: a book about Arthur from Merlin’s perspective and not only that but a Merlin that has a different kind of power. In this account, Merlin is not a magician but an engineer, a matchmaker and a prophet. The latter, the only real supernatural element in the story: as a seer, Merlin is guided by an anonymous God whose will is entirely mysterious to Merlin. The God speak through him and it is through the God’s design that Merlin makes his moves.

For his whole life he does as he “feels” he must, guided by the anonymous God’s power. Rather than being an independent agent, Merlin effectively lacks any free will. It is an interesting choice for this character and one that could have led to complex questionings but one I am not sure works because of the tone and nature of the narrative. The Crystal Cave is a detailed recounting of the events that take place in Merlin’s life told by an elderly Merlin from a point in future (and we know this from the start of the story) and is a detached, unemotional account for most part.

This mixture of detachment and of writing “after the fact” allows for little to no dramatic tension and it does not help that Merlin never questions his role – he simply does as he is “told”. There is no tension, no interrogation of this lack of agency.
Instead we are left with page after page (after page) of detailed political machination and warfare being performed by other characters who are never truly developed and whom we know, are simply following a “script” that will lead to the Birth of Arthur.

This book is therefore, boring as hell.

Because basically, Merlin in this account, is a tool. And in more ways than one. Because let me tell you: the female characters in this novel? Ai, ai, ai, caramba.

The book, in the vast majority of its 500 pages has very little of female characters, not enough speaking female characters, much less female characters who do anything beyond being whores, mothers, saints or sluts (actual word used several times to refer to female characters). The book is entirely in first person from Merlin’s viewpoint and his narrative is wholly misogynistic – one where he fears women, doesn’t understand them, or sympathise much with them. Characters being misogynistic assholes are no fun to read but they are not a problem per se AS LONG AS the narrative checks and balances this. But the actual events in the book reinforce his misogyny and do very little to interrogate the roles that female characters have in Merlin’s life. It’s stereotypical and insulting and I‘d like my fiction without it, please and thank you.

This was my first experience with Mary Stewart and I can’t say I am particularly impressed. Should I give this author another chance? Any suggestions where to go next?

Book Review: The Girl from the Well by Rin Chupeco