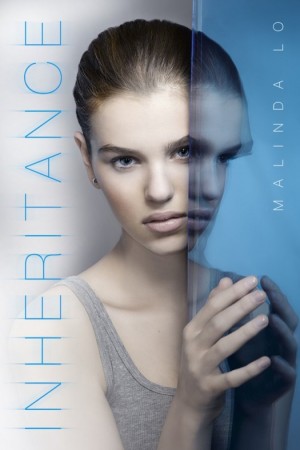 The triangular spaceship hovered motionless in the sky above Reese Holloway’s house, as inscrutable as a black hole. It had seemed like a good idea when they were inside: to tell the truth about what happened to them at Area 51. It didn’t seem like such a good idea now.

Reese and David are not normal teens—not since they were adapted with alien DNA by the Imria, an extraterrestrial race that has been secretly visiting Earth for decades. Now everyone is trying to get to them: the government, the Imria, and a mysterious corporation that would do anything for the upper hand against the aliens.

Beyond the web of conspiracies, Reese can’t reconcile her love for David with her feelings for her ex-girlfriend Amber, an Imrian. But her choice between two worlds will play a critical role in determining the future of humanity, the Imria’s place in it, and the inheritance she and David will bring to the universe.

In this gripping sequel to Adaptation, Malinda Lo brings a thoughtful exploration of adolescence, sexuality, and “the other” to a science fiction thriller that is impossible to put down.

Stand alone or series: Book 2 in the Adaptation duology

Why did I read this book: Apart from a few misgivings, I really enjoyed Adaptation, the first book in the duology and wanted to see how it all ended.

Inheritance is the sequel to Adaptation and it picks up right where that book ends: with David and Reese preparing to uncover to the world the truth of what happened to them at Area 51. Back in book 1, the two teenagers died in a car accident and were brought back to life with alien DNA, ie they were “adapted”. In book 2, they must adapt to being adapted, if you will. On a personal level, the alien DNA affects them in unique ways, creating a deep connection between them. On a larger scale they come to realise the impact of what it means to be the first people to be a successful hybrid of human-alien DNA. Most of Inheritance deals with this as well as the political, world-wide repercussions of alien contact. Conspiracies abound from all sides and it’s hard for David and Reese to decide who to side with. Not to mention that for Reese, there is also the pesky business of being in love with two people at the same time: David and the alien Amber.

Inheritance and Adaptation work really well as a duology. This might sound like I am stating the obvious, but these two books are really not standalones, it’s one story split into two books and reading Inheritance made Adaptation better for me. I really enjoyed that first book but had several issues with the pacing, the writing, the way that David was a non-entity in that book, especially in comparison to Amber, the other corner of the love triangle. I am glad to report that most of these issues where smoothed over in the second book. In terms of writing, I have no big complaints (fewer examples of writing shortcuts, thank gods) and both David and Amber were developed with more depth to the point where I was rooting for both.

Inheritance is undoubtedly SciFi (aliens, conspiracies, DNA, spaceships, mind-melding) but I felt its concerns were very political and the kind of politics and thought-provoking issues that truly interest me. Reese is over and over again facing issues of identity (sexual identity as well as ethnic identity). It’s in the way she had to face public opinion about everything, about her relationship with David (who is Chinese American) and how people refer to him, about her relationship with Amber and how to deal with admitting to it and also coming out as bi (I feel that the story just about avoided didacticism but I wonder how most readers might feel about it).

I love how it was framed in the way that showed her own privilege when it came to being white for example:

I still had issues with pacing – the story takes its sweet time to get going and there are lulls in the narrative and I have to wonder if Inheritance wasn’t a bit needlessly overlong. I also have misgivings about the fact that Reese and David can potentially always tell what the other is feeling/thinking (that creeps me out SO MUCH) and even though in the end they were working toward a way of controlling this, I still needed a bit more of…other characters going “ew, this is so fucked up and wrong”.

But I will take it. I will take it because Inheritance is cool in that way that Science Fiction finds of being cheesy but also thought-provoking. It’s cool in the way that it deals with Reese’s development into self-assertiveness and her identity as bi. And it’s at its coolest when the conclusion to the Love Triangle of Doom is not to have a huge breakdown into Teams but to actually have all sides talking about their feelings and arranging a relationship where everybody wins. It basically goes from Love Triangle of Doom to Poly Love of Awesome. Sometimes I really just want to read a fun story about aliens, conspiracies then have awesome people make out with each other. This duo of books gave me exactly that.

To sum up: aliens, conspiracies, bisexual love triangles, polyamory YA, oh my!

Additional thoughts: Malinda Lo is blogging with us today writing about Bisexual Love Triangles. Go here to read it.

Reading Next: She is Not Invisible by Marcus Sedgwick