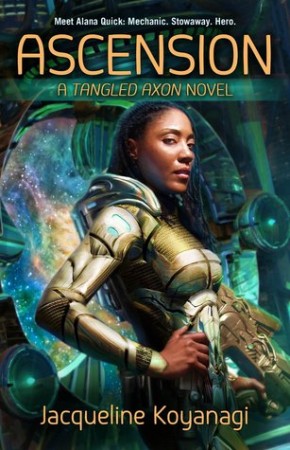 Alana Quick is the best damned sky surgeon in Heliodor City, but repairing starship engines barely pays the bills. When the desperate crew of a cargo vessel stops by her shipyard looking for her spiritually advanced sister Nova, Alana stows away.

Maybe her boldness will land her a long-term gig on the crew. But the Tangled Axon proves to be more than star-watching and plasma coils. The chief engineer thinks he’s a wolf. The pilot fades in and out of existence. The captain is all blond hair, boots, and ego . . . and Alana can’t keep her eyes off her. But there’s little time for romance: Nova’s in danger and someone will do anything–even destroying planets–to get their hands on her.

Stand alone or series: First in a series

Why did I read this book: Seriously? Did you read that blurb? And that cover is reason alone to be honest.

This is what you need to know about Ascension, in a nutshell: a main character who is a queer woman of colour, grappling with a debilitating chronic illness in a context of poverty, who has a difficult relationship with her sister and starts to fall in love with another awesome female character who is polyamorous. IN SPACE.

If the above is not the definition of “shut up and take my money”, I don’t know what is.

Alana Quick is a sky surgeon in a crumbling shipyard who is forever worried about making ends meet. Hardly any vessels need to be fixed these days and Alana hasn’t been able to get a secure job on any ships so far. It doesn’t help that she has a painful chronic illness that is kept in check with expensive pills and whose cure looms in the horizon if only she could afford it.

Then a cargo vessel drops by looking to hire the services of her sister Nova (who is a spiritual guide) and Alana doesn’t think twice before stowing away. Maybe she can use the knowledge of Nova’s whereabouts as leverage to join the crew (this strange, strange crew that includes a fading girl, a wolf-man and a hot [HOT] captain) maybe she can join them on their quest to find a cure for their ailing pilot (and help herself as well).

But things are not that easy or as romantic as Alana expects them to be. There is real danger out there: the people who want Nova’s help don’t necessarily have her best interest at heart. When the unthinkable happens, all of a sudden they are all on the run for their lives.

There is a lot that is pretty awesome about Ascension including the way that Alana falls in love with ships, the hot (HOT) romance Alana and skyship captain Tev and the way that relationships and people are portrayed as fluid and ever evolving in a myriad of positive ways. But I was particularly impressed by its treatment of chronic illness and the fraught relationship between Alana and her sister Nova. With regards to the former, it is in the way that Alana pushes herself mostly because she needs to not only because she loves her job so much and nothing can stop her from performing it but also because she is poor and doesn’t have a choice but to work to pay for her meds. The contextual background of poverty is one that informs a lot of her decision-making and in a way this book could have been set right here, right now.

I especially liked how these two strands are so intricately linked in the way that their difficult relationship taps into the way both have learnt to relate to their bodies. Alana’s disease and the very real presence of pain makes her cling to her body whereas her sister wants to let it go. But for Nova, of course, it goes beyond that. It would be also so easy to reduce Nova’s decisions simply to a reaction to Alana’s illness but the story actually avoids this by making it a point to explore the topic of able body privilege. In this context this is a difficult topic because of how close both women are and the fact that Alana has limits doesn’t (shouldn’t) preclude Nova from having a choice to do what she wants with her own body regardless of how Alana feels about it. It is a strained, difficult relationship as a result and I loved this arc.

But there is not all there is to it. Alana’s narrative is one that is forged from her own experiences and prejudices and one that often exudes a certain level of naivety – part of her arc is that she still has a bit of growing up to do by learning to relate to other people. So in way, it is completely understandable that she’d behave the way she did, irresponsibly leaving her aunt behind on her own to join the crew of the Tangled Axon because of the dream as well as the possibility of a cure.

That said, it is not all rainbows and ponies. There is a certain lull in the narrative half-way through the novel and a certain tendency of the text to rely way too much on people not communicating with each other. At times it seemed that the plot only moved forward because of secrets that were kept for no good reason other than to prolong the dramatic tension.

But in the end, this was a pretty good novel. I can’t wait to read more adventures with the Tangled Axon crew.

“Love is like sunlight,” she said when I didn’t respond. “You can give all of yourself to someone and still have all of yourself left to give to others, and to yourself. To your work. To anything or anyone you choose. Love isn’t like food; you won’t starve anyone by giving it freely. It’s not a finite resource.”

Reading Next: The Year of Shadows by Claire Legrand