Today, we are thrilled to do something a little bit different. We’ve got not one, but a whole set of smugglerific covers to reveal. The title is Countdown City by Ben Winters, sequel to 2013 Edgar Award-winning science fiction mystery novel, The Last Policeman.

Before settling on the final cover for the book, Countdown City (older working title: Disasterland) went through the following awesome designs. AND we’ve got the designer from Quirk Books, Doogie Horner, here to talk a little bit about each of these and his thoughts behind each image. 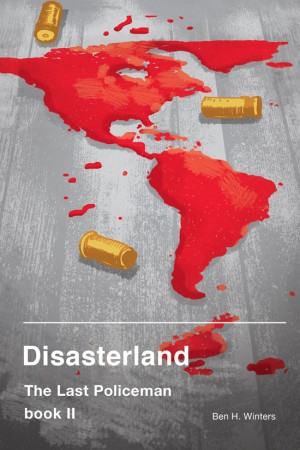 Doogie’s Thoughts: [Disasterland] was before the title changed to Countdown City. I had an idea to make a blood spatter in the shape of North America. In retrospect, it seems contrived, but at the time I was in the manic grip of that idea and was convinced it could be made to look cool. I spent a LOT of time trying to make it work, but visually it didn’t convey the mood of the book.
For a novel cover, it’s usually more important to convey mood than concept, but since this is a high concept novel, I was fixated on communicating both. 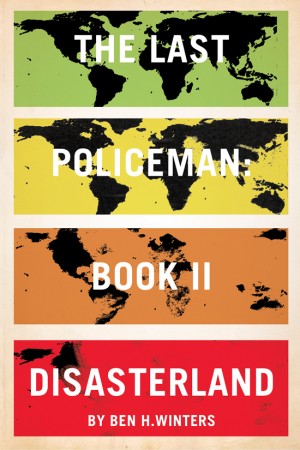 Doogie’s Thoughts: The color bars align with the danger level colors as the map disappears. The cover communicates the global scale of the impact, but since the story only takes place in a few locations—the immediate narrative doesn’t actually span the globe—this was wrong. Also looks too much like a pandemic story. 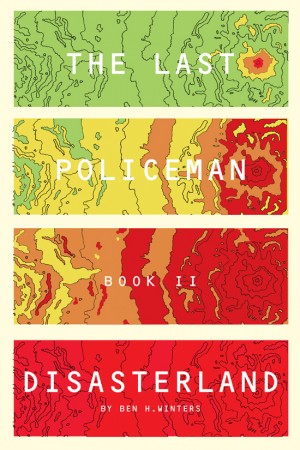 Doogie’s Thoughts: I love the way this one looks, but it says “pandemic” even more than the previous cover. Doesn’t communicate mystery much, although I was hoping it looked a little like a bullet wound with slowly spreading blood. 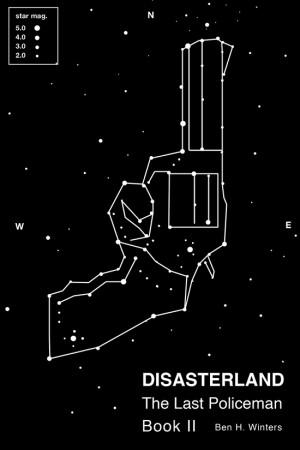 Doogie’s Thoughts: I really patted myself on the back for this cover. I was totally convinced it communicated both sci-fi and mystery. Still baffled by its rejection. 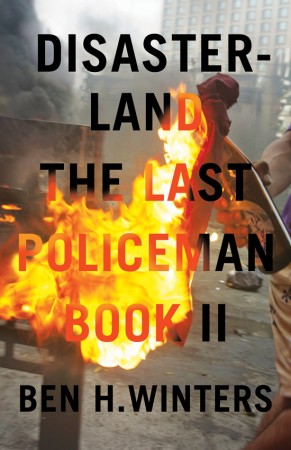 Doogie’s Thoughts: I started using photos which ultimately led to the current design. This cover communicated the civil unrest that permeates the story, but ultimately we wanted a cover that said “mystery” more than this one. I was also still using the type treatment for the first printing of the Last Policeman, and after this cover we ditched that constraint which really freed things up.

About The Book: (Final cover art, title, and synopsis) 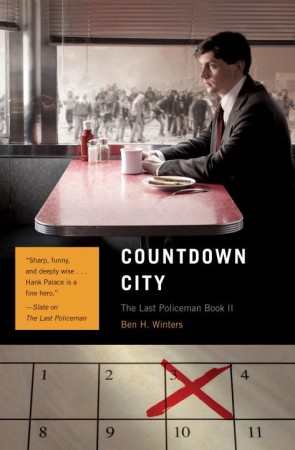 There are just 74 days to go before a deadly asteroid collides with Earth, and Detective Hank Palace is out of a job. With the Concord police force operating under the auspices of the U.S. Justice Department, Hank’s days of solving crimes are over…until a woman from his past begs for help finding her missing husband.

Brett Cavatone disappeared without a trace—an easy feat in a world with no phones, no cars, and no way to tell whether someone’s gone “bucket list” or just gone. With society falling to shambles, Hank pieces together what few clues he can, on a search that leads him from a college-campus-turned-anarchist-encampment to a crumbling coastal landscape where anti-immigrant militia fend off “impact zone” refugees.

The second novel in the critically acclaimed Last Policeman trilogy, Countdown City presents a fascinating mystery set on brink of an apocalypse–and once again, Hank Palace confronts questions way beyond “whodunit.” What do we as human beings owe to one another? And what does it mean to be civilized when civilization is collapsing all around you?

You can read more about the book online HERE, and check out the book trailer for The Last Policeman (book 1) HERE:

You can also read the excerpt online HERE. 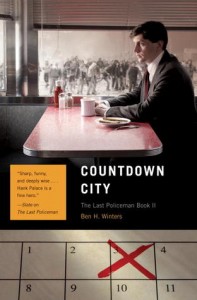 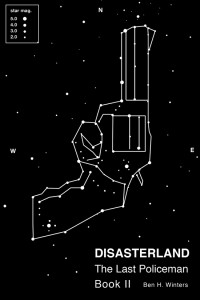 We have a copy of The Last Policeman, Countdown City PLUS an exclusive print of one of the alternate covers above (alternate cover #4, the gun and stars image) up for grabs! The contest is open to addresses in the USA and will run until Sunday, July 21 at 12:01am. To enter, use the form below. Good luck!

A Smugglerific Cover: Other Half of the Sky – edited by Athena Andreadis

A Smugglerific Cover: The Merger by Sunil Patel