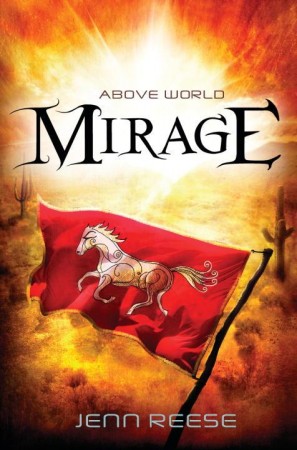 A thrilling sequel from an exciting new voice in middle-grade sci-fi tracks two ocean-born children braving the dangers of the Above World.

The desert is no place for ocean-dwelling Kampii like Aluna and Hoku, especially now that Aluna has secretly started growing her tail. But the maniacal Karl Strand is out to conquer the Above World, and the horselike Equians are next on his list. Aluna, Hoku, and their friends — winged Calli and Equian exile Dash — race to the desert city of Mirage, intent on warning the Equians. When they arrive, Strand’s clone, Scorch, has gotten there first. Now the Equian leader has vowed to take all his people to war as part of Strand’s army. Any herd that refuses to join him by the time of the desert-wide competition known as the Thunder Trials will be destroyed. To have any chance of defeating Scorch and convincing the Equians to switch sides, the four friends must find a way to win the Trials. The challenge seems impossible. But if they fail, the desert — and possibly all of the Above World — will be lost to Karl Strand forever. Here is the action-packed follow-up to Above World, which Kirkus Reviews called “a thrilling sci-fi adventure. Imaginative and riveting.”

Stand alone or series: Book 2 in the Above World series

Format (e- or p-): Print (Funny story – the US publisher sent a copy over to Ana in the UK, and then I waited for Ana to bring that copy back to the US for our annual BEA meetup.)

Why did I read this book: Are you freaking kidding me? I loved Above World, the first book in this fantastic new middle grade series. I actually mis-scheduled my review of Mirage – had I known this book came out in March, I would have bought it immediately. Imagine my delight, then, when Ana arrived with a copy of this beautiful, beautiful ARC. OF COURSE I was going to read it as quickly as possible!

**WARNING: This review contains unavoidable spoilers for Book 1, Above World. If you have not read the first book in this series and wish to remain unspoiled, look away. YOU HAVE BEEN WARNED!**

The battle of HydroTek is over, and the fierce Aluna and her friends Hoku, Calliope, and Dashiyn have emerged victorious over Karl Strand’s clones. Battered and tired, the group makes their way to Dash’s people, the four-hooved Equians of the desert, to warn them of Karl Strand’s nefarious schemes for power. Their greatest hope of warning the horse-people lies with the grand city of Mirage, home of the High Khan Onggur – a man of great honor, who rules not only over the Red Sky herd but all Equian lines. What the group finds at Mirage, however, is disheartening. They are too late to warn Dash’s people, and High Khan Onggur has allied with a human “upgrader” (that is, a technologically enhanced human/cyborg) who calls herself Scorch – another of Strand’s clones, who has manipulated her way into the High Khan’s favor. Even worse, Scorch has an ax to grind with the Avians, and demands Calli’s blood for the bird-people’s murder of Scorch’s clone-siblings. Luckily, Calli, Dash, Hoku, and Aluna are granted a temporary reprieve, when Tayan, emissary from the Shining Moon herd, intervenes and claims responsibility for Dash – for his appearance in Mirage is a violation of his Exile, and so by Herd law he must face punishment with his original tribe.

And, as if things couldn’t be any worse, there’s also the problem of Aluna’s legs gradually fusing and changing into her Kampii tail – in the middle of the desert so far away from the ocean, with so many lives at stake depending on her and her strength in battle, this might be the most dangerous secret of all.

The second book in the Above World series, Mirage is every bit as action-packed and grand as the first book. Instead of the sea and sky, however, this novel takes Aluna and her friends to the hot, dusty desert, to the ways of the horse-human Equians (and the snake-human Serpenti). As with Above World, these new, genetically modified half animal/half human characters are fascinating and well formed, with varied cultures, customs, and beliefs. The ways of the Equian people take center stage in this novel, and Aluna and her friends learn of their fierce belief in honor and bloodlines, the power of tradition and the sanctity of the herd. I love that the Equians are very different people than the Kampii of the oceans, or the Avians of the skies – but at the same time, these horse-humans are every bit as real and flawed as the other two societies. Perhaps moreso, because of their almost blind adherence to tradition and strict constructs of honor. For example, the Equian treatment of the aldagha – that is, “failed” Equians, mistakes that did not form properly in their genetic incubators – Dash (and another character introduced later, Tal) is cruel, discriminatory, and wrong. I love how this social construct and behavior is challenged by Aluna and her friends, who know Dash to be incredibly honorable, brave, and worthy of respect.

The worldbuilding in this series continues to impress me, as we learn more about Aluna’s world and the different, fractured clans and peoples that populate it. In Above World, we discovered that people took to the skies, the seas, the deserts, and the caves with genetic modifications to survive the more devastating effects of the changes to their planet. This basic framework is furthered in Mirage, as we learn that the different clans of chimeras were never meant to live alone or in opposition to one another. And, after so many years of isolation and stagnating technology, they are facing death – even extinction. The Serpenti, for example, have been all but destroyed thanks to their long war with the Equians, just as the Kampii face their own failing technology and shrinking reproductive pools. Needless to say, this is actually a very complex, nuanced, and fully-imagined world – I was impressed with how fully these facets of the world were developed in Above World, and I’m even more impressed with how this framework is expanded upon in Mirage.

Of course, the REAL heart and soul of the series lies with the characters – and oh, how much I love these characters. I love the prickly Aluna who is learning that she must trust others and cannot face everything alone (by the end of the book, she desperately relies on Hoku’s help and that is kind of a beautiful thing). Not to mention the fact that Aluna is growing an actual tail out in the desert, which presents a whole new set of challenges for the young Kampii woman – you might think that Aluna’s soon lack of legs means The End for her character. You would be wrong. There’s also Hoku, who also grows more confident in this second book and is, after Aluna, my favorite character of the ensemble because of his earnestness and trustworthiness as a friend. (Sidenote: I love how Aluna and Hoku’s friendship is completely platonic – it’s very refreshing to read.) Calli gets less time in this book, but is still a major character whose fierceness is always welcome – but the real other standout character in Mirage is Dash. After all, this is the book of the Equians, and Dash’s past is fraught with struggle, pain, and honor – I so loved getting closer to Dash and his backstory.

The plotting isn’t bad, either! The novel moves along at a brisk pace with high stakes, culminating in a dramatic competition of blood and strength in the desert. And, while everything is resolved in a way that is a little too pat, I do love the direction of the story and the feeling that a much larger, more important battle is on the horizon. I cannot wait to see where Jenn Reese takes Aluna and her friends next.

Simply put, I loved Mirage. It’s every bit as dramatic and action-packed as Above World, and while I still think I preferred the first book, Mirage more than holds its own. Absolutely recommended – and in the running for one of my notable reads of 2013.

Aluna ran toward a patch of rocks and scrubby trees, trying to reach its shade before the next wave of pain struck. The sun’s gaze followed her, searing the air and stifling the wind. The desert was no place for a Kampii, especially not a Kampii whose legs would soon begin fusing into a tail.

She stumbled and fell. Sand matted to the sweat on her face as she rolled on the ground, clutching her legs. The pain was her fault. She’d swallowed the Ocean Seed a month ago, when she was trying to rescue her sister from that evil monster Fathom. Now she was paying the price.

Underwater, a tail granted speed and agility. It shimmered and flowed. Growing a tail marked a Kampii’s passage to adulthood and respect. But in the desert, weeks away from the ocean’s embrace, a tail meant the opposite. It meant she’d no longer be able to walk or run or jump or fight. She’d be a fish on dry land. Useless.

Reading Next: The Testing by Joelle Charbonneau