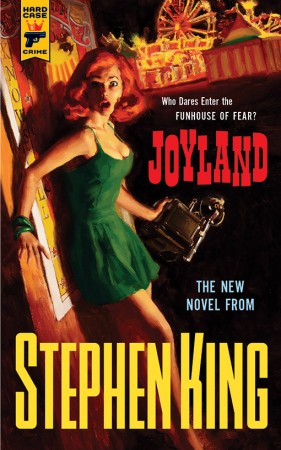 Set in a small-town North Carolina amusement park in 1973, Joyland tells the story of the summer in which college student Devin Jones comes to work as a carny and confronts the legacy of a vicious murder, the fate of a dying child, and the ways both will change his life forever.

Format (e- or p-): Print (there are no ebooks for this title – more on that below in “Additional Thoughts”)

Why did I read this book: When it comes to Stephen King, people tend to fall into two camps: those who love his work, and those who do not. I am a member of the former camp, so I was intrigued when I learned about this forthcoming pulp-noir paperback from a smaller publisher. That said, I almost didn’t review this book because of the incredibly annoying statement from King concerning his reasoning for preventing this from being available in ebook format (which is, in my opinion, idiotic and cutting out a large swath of the market – but it’s not as though Stephen King needs to worry about the access or the money, right?). But again, more on that after the review.

In the summer of 1973, Devin Jones trades his job hosing down dishes at the University of New Hampshire commons for a few months at Heaven Bay, North Carolina – a seaside town, home to a second-tier amusement park called Joyland. It’s a summer of firsts for Devin – the first time he gets his heart broken (by his very first love, the cruelly indifferent Wendy); the first time he learns carny Talk; the first time he dons “the fur” and finds something he’s truly great at doing. It’s also the summer that Devin stumbles upon the legacy of a young woman’s murder in Joyland’s house of horrors, and her ghost, who is rumored to haunt the ride. In those long summer days of 1973, Devin makes lifelong pals with coworkers Erin Cook and Tom Kennedy, and also befriends a sick young boy on the verge of death, as well as the boy’s desperate mother. As those long days of summer turn to the colder and shorter days of autumn, Devin slowly gets over his broken heart, and comes closer to the truth of Joyland’s legacy of murder – but at great cost.

It’s a summer of firsts and a summer of lasts, that summer of 1973 – and for better or for worse, Devin will never, ever be the same.

The newest novel from the prolific Stephen King, Joyland is…not what I was expecting. We often talk about reader expectation here at The Book Smugglers, usually in the context of the hype preceding a book, or the marketing campaign around said book. In the case of Joyland, from the vague synopsis and pulpy cover, I confess that I was expecting something gloriously ostentatious, something excessive. A horror story about a haunted carnival ground, in which Evil itself has manifested in the murder of unsuspecting pretty young things, perhaps. Imagine my delight, then, when I discovered this most certainly was not the case. Though Joyland is overtly pulpy in its package – including Hard Case Crime’s gorgeous cover, true-to-format pocketable paperback, and delightfully tawdry catch lines (“All-time Best-selling Author Stephen King Returns with a Novel of Carny Life – AND DEATH”) – this is not really a horror novel, or a ghost story, or a hardboiled mystery.

No, in truth, Joyland has more in common with King’s non-horror works (“Rita Hayworth and the Shawshank Redemption,” “The Body” or “Sometimes They Come Back” immediately come to mind).[1. Heck, technically Joyland feels very much in line with that much buzzed about – and apparently much despised by the blogosphere – “New Adult” category of fiction.] It’s the story of a twenty-something young man in the early 1970s, grappling with first love and first heartbreak, his first meaningful and life-changing job, his first major life-changing decisions. Of course, while a very human coming-of-age novel, the book is also slightly supernatural, and bears the keen, bloodied tang of murder. That said, it’s certainly not the supernatural tale of a traveling show on the edge of Good and Evil (ala HBO’s Carnival), or serial murder on the boardwalk that I was expecting.

And you know what? I’m glad. Hell, I’m thrilled that the story does NOT go the garish, cheap thrill route with the amusement park – because, really, it’s so easy and obvious to extrapolate the horror of the carnival and make the entire park twisted, or haunted, or all those who work there evil.[2. Joyland is not, for instance, the carnival scenes of Quicksilver Highway, another King creation.] In truth, Joyland is kind of a love letter to those last boardwalk-like amusement parks; the ones that aren’t corporate like Disney or Knott’s or Universal Studios. Joyland is a magical, unique kind of place in this book, one where the employees sell fun (to borrow a phrase from Joyland’s aging founder and owner). It’s the kind of place we might remember from childhood, and yearn for as adults.[2. On a side note, anyone else a King fan? Doesn’t the beginning of this book sound familiar, the setup of the young boy and his mother on a seaside town feel like The Talisman‘s Arcadia Funland?]

So Joyland is a novel very much tied to a sense of place and a time (the early 1970s), but it’s also a character novel. Narrated in the first person retrospectively by a much older (and wiser) Devin, we watch a young man bid his childhood adieu, with glimpses at his future and the future of other characters. I am a fan of King’s retrospective writer narrators (again, “The Body” comes to mind), and Devin’s voice is as sympathetic as it is earnest – from his yearnings to have sex for the first time, to his melancholy following the cruel rejection of his first love, Dev is a very real, human young man with a penchant for the dramatic. The other characters are more of the archetypal variety – the fatally ill boy and his beautiful but fractured ice queen of a mother, the fortune-teller who may be a fraud with her over the top accent but actually does posses “the Gift,” and so on and so forth. Still, this is Devin’s story, and the archetypes aren’t bad, simply familiar. There’s comfort in that familiarity, and King plays these archetypes with formidable skill.

Of course, what is a Stephen King novel without a supernatural horror element? The murder of a young woman and her unfortunate ghost is as paranormal as Joyland gets, however, this part of the story is firmly is secondary to Devin’s personal arc. The murder mystery and the killer’s true identity are nicely executed and thankfully not obvious (the first suspect for the killer is not the person who actually ends up being the killer), and I love that the book comes to a dramatic confrontational conclusion (think: ferris wheel ride during a tropical storm – that is not a metaphor). I do wish there was a little more of the murder and the mystery in the mix, and can’t help but yearn for a little more of the supernatural or the pulp – there’s that pesky weight of reader expectation, again.

But ultimately? Joyland isn’t about ghosts or murders or unmasking a killer. At heart, it’s a book about growing up and moving on. It’s a bittersweet tale of love and heartbreak, sadness and healing. And aren’t those the best kind of stories?

One of the best Stephen King novels I’ve read in years, I thoroughly enjoyed Joyland – and it’s in the running for one of my notable books for 2013. Absolutely recommended.

I had a car, but on most days in that fall of 1973 I walked to Joyland from Mrs Shoplaw’s Beachside Accommodations in the town of Heaven’s Bay. It seemed like the right thing to do. The only thing, actually. By early September, Heaven Beach was almost completely deserted, which suited my mood. That fall was the most beautiful of my life. Even forty years later I can say that. And I was never so unhappy, I can say that, too. People think first love is sweet, and never sweeter than when that first bond snaps. You’ve heard a thousand pop and country songs that prove the point; some fool got his heart broke. Yet that first broken heart is always the most painful, the slowest to mend, and leaves the most visible scar. What’s so sweet about that?

Additional Thoughts: I cannot finish this review without addressing Stephen King’s frustrating 180 regarding ebooks with this particular title. King said:

“I love crime, I love mysteries, and I love ghosts. That combo made Hard Case Crime the perfect venue for this book, which is one of my favorites. I also loved the paperbacks I grew up with as a kid, and for that reason, we’re going to hold off on e-publishing this one for the time being. Joyland will be coming out in paperback, and folks who want to read it will have to buy the actual book.”

I understand the sentiment, and wanting the book to harken back to those pulpy paperbacks of yesteryear. That said, it strikes me as both narcissistic and backwards to deliberately cut out a majority section of the market by choosing NOT to bring Joyland out as an ebook (both from a monetary perspective, and an access perspective, especially from a smaller publisher).

The last part of that statement, the “folks who want to read it will have to buy the actual book” is the kicker, though. I’m going to say it, one more time, with feeling: EBOOKS ARE ACTUAL BOOKS. THEY ARE REAL BOOKS. YOU BUY THEM JUST LIKE YOU BUY PRINT BOOKS.

And that is all I have to say about that.

Reading Next: A Corner of White by Jaclyn Moriarty