Novella Review: “Adrift on the Sea of Rains” & “The Eye With Which The Universe Beholds Itself” by Ian Sales 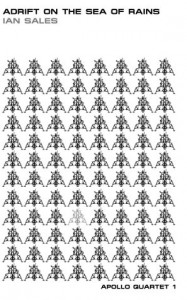 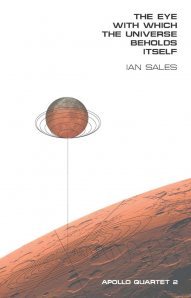 When a nuclear war breaks out and the nations of the Earth are destroyed, it maroons a group of astronauts on the Moon. Using the “torsion field generator”, they hope to find an alternate Earth that did not suffer nuclear armageddon. But once they do, how will they return home? They have one Lunar Module,. which can carry only four astronauts into lunar orbit…

For fifteen years, Earth has had a scientific station on an exoplanet orbiting Gliese 876. It is humanity’s only presence outside the Solar System. But a new and powerful telescope at L5 can detect no evidence of Phaeton Base, even though it should be able to. So the US has sent Brigadier Colonel Bradley Elliott, USAF, to investigate. Twenty years before, Elliott was the first, and to date only, man to land on the Martian surface. What he discovered there gave the US the stars, but it might also be responsible for the disappearance of Phaeton Base…

Stand alone or series: Entries 1 an 2 in the Apollo Quartet

How did I get this book: I received review copies from the author

Why did I read these novellas: I have been trying to read more of shorter fiction and when Ian Sales offered the novellas for review – and considering that the first one is up for a BSFA Award this year – I gladly accepted it.

Ian Sales is a British writer, blogger (check out SF Mistressworks if you haven’t already) and more recently the founder of Whippleshield Books, a small press that focus exclusively on literary hard science fiction and space fiction, through which Sales is publishing his Apollo Quartet series of interconnected novellas.

“Adrift on the Sea of Rains” is the first entry and introduces the world this series is set on, where the Apollo Space Program did not end with Apollo 17. In the first novella the Cold War is still going strong – except, not as “cold” as one could hope. It opens in the aftermath of nuclear Armageddon, a recent event that has left a group of astronauts – the last people in the universe – marooned on the Moon. The group has enough food to sustain themselves for just a while longer and their only hope rests with The Bell, a mysterious Nazi device recovered by Americans after WWII, a device scientists believe to be a gateway to parallel universes and taken to the Moon to be tested. Should the astronauts manage to make it work, The Bell could be the only way for them to go back home – even if not to the same home they departed from.

The story follows Vance Peterson, former commanding officer of the lunar base and it alternates between now – in these bleak, desperate times – and then, when Peterson was still a pilot flying in the context of an escalating Cold War.

It is interesting to see how Sales managed to blend together Hard SciFi (expertly including scientific elements and descriptions of the Apollo missions) with a more …indulgent strand of SciFi based on a mystical object that allows people to transverse to parallel worlds. Although one could definitely argue that the idea of parallel worlds is as Hard SciFi as it can be based on quantum physics, the fact remains there is a McGuffin here. It is such a minor element though that it does not become a discrepant plot point, quite the contrary, it is actually a fun element in an otherwise bleak story. Plus, I am extremely fond of alternate history stories especially those like this one, featuring alternate history that is actually part of a multiverse.

The novella also depicts well – very well, rather –the ongoing sense of desperation and isolation of the astronauts on the Moon. Although most of it is from Peterson’s perspective (a perspective that is definitely coloured by a sense of hope), his point of view still manages to capture the small intricacies of a group of people whose time is running out, living in close quarters together, barely communicating with each other, each person dealing with this on their own (three astronauts have killed themselves). The description of the desolate lunar landscape is now a mirror to the Earth they see from a distance, a no-longer blue world. Imagine that. Trapped on the Moon, with fully functioning equipment but unable to go anywhere because there is nowhere to go.

The story evolves quickly to an ending that seems inevitable the more we learn about Peterson – his past actions, showing a whole new dimension to the story but also to the type of person he is. Unaware of personal responsibility and led by unquestioning Cold War paranoia and propaganda: the ending is perfectly emblematic of the latter.

The question of personal responsibility and how one person deals with events larger than life is also central to the second novella in the Quartet: “The Eye With Which The Universe Beholds Itself”. In this novella, Apollo 11 never reached the Moon, Russia got there first. Fortunately for NASA, they were the first to get to Mars. Colonel Bradley Elliott is the first – and only – man to set foot on Mars and his expedition there and back is part of the (once again) dual narrative between then and now. The now, follows Elliott twenty years later and now retired, on a trip surrounded in mystery, to investigate the apparent disappearance of humanity’s first space station on an exoplanet outside the Solar System.

This second story has a very interesting tone which differ significantly from its predecessor’s bleak outlook (well, at least to start with for both endings are bittersweet) with a more exciting, fun storyline. : “The Eye With Which The Universe Beholds Itself” is more of a mystery and the parallel timelines evolve with increasingly tense narratives. The then, depicting Elliott harrowing trip to Mars in a one-man mission, following his discoveries there. And the now, depicting Elliott’s journey to a doomed outpost in space. Both storylines are connected in a way that only becomes clear toward the end and which underline Elliott’s own significance.

In terms of emotional resonance, the second novella portrays Elliott’s personal struggle between wanting a personal life (especially his relationship with his wife) and wanting to make a difference and to matter . Being the first and only man on Mars is no insignificant event and its life-altering consequences likely to affect all aspects of one’s life. The best thing about this novella though is the poignant choice humanity seems to have made in order to explore the universe. Without spoiling too much, choices have been made that have firmly set humanity in an impossible position between what they know to be true and what they can actually observe.

On the down side, one cannot help but to notice the very male-centric focus of these two novellas – apart from one female pilot in the second story, female characters seem to be relegated to the role of “lost wives” that give the two main male characters cause for their grief. I’d love to see at least one main female character take the lead in the next two stories. Here is hoping. I also felt that the scientific jargons used offered a level of credibility to the story but were often extremely dry in the way they were incorporated in the novellas, impacting the stories by making it difficult to develop a more emotional connection to them.

Ultimately, both stories are equally good although I ended up preferring the second – what can I say, I have a weakness for mysterious plots about the possible existence of aliens.

“Adrift on the Sea of Rains” has been shortlisted for the BSFA Award in the short fiction category. I expect “The Eye With Which The Universe Beholds Itself” to go the same way.

Reading next: The Difference Between Me and You by Madeleine George

Book Review: You Are So Undead To Me by Stacey Jay