Who: Michelle Cooper, author of fiction and historical fiction novels for young adults. Thea discovered Michelle Cooper back in 2009 when A Brief History of Montmaray was first released in the USA, but lost track of the series until this year, when she rediscovered these 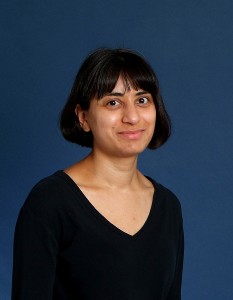 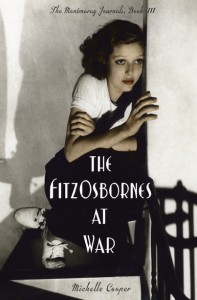 Recent Work: The amazing finale to the Montmaray Journals trilogy, The FitzOsbornes at War – Thea adored this book, so much so that she put it at #2 on her Top 10 Books of 2012 list!

Without further ado, please give it up for Michelle, folks!

I like books about girls being awesome and luckily, I read quite a few of them this year. One of my favourite YA novels was The Getting of Wisdom by Henry Handel Richardson. 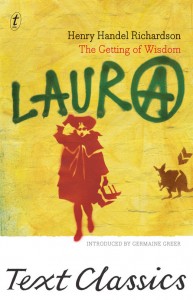 It was first published in 1910 and is set in the 1890s, but the themes are completely contemporary. Laura, a clever, imaginative country girl, is sent to a snobby boarding school in Melbourne, where the other girls make fun of her home-made dresses, outspoken manners and lack of interest in boys. Poor Laura gets into one scrape after another as she desperately tries to fit in. Imagine a cross between Jo and Amy from Little Women and you’ll get some idea of Laura’s character. She gives her heart too easily to others, she can be vain and proud and impulsive, I winced at some of the idiotic things she did to impress others, but she’s never boring and I cared deeply about what was going to happen to her. By the end, it seems as if she’s been beaten down into dull conformity like all the other girls . . . but no, as Laura walks out of the school gates for the last time, she is overcome with an unladylike need for speed and the last we see of her is a gleeful figure racing through the park with her hat flying off. I should point out that reviewers in 1910 were not very impressed with Laura, with one saying sternly about The Getting of Wisdom, “The Australian girl is a much cleaner, wholesomer and straighter person than any of the characters portrayed. It is a book we should thoroughly recommend adults to keep out of the hands of girls.” So, you’ve been warned.

I also loved Saffy’s Angel by Hilary McKay, the first in a series about the quirky and entertaining Casson family. 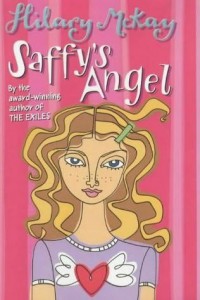 The parents are all either vague, absent or dead, but the children are resourceful and clever. Caddy, the eldest, is beautiful and kind. When she’s not looking after the younger children, she’s tending to her guinea pigs or having driving lessons. She has had ninety-six lessons and still can’t reverse or turn right (coincidentally, she’s in love with her gorgeous driving instructor). Indigo, the only boy, is sensitive and caring, and keeps himself busy “curing himself of vertigo for when he becomes a polar explorer”. Rose, the youngest, is artistic, headstrong and very good at managing (or manipulating) their parents. Then there’s Saffy, who discovers that she’s adopted and refuses to believe the others when they insist she really is a Casson. With the help of her best friend, Wheelchair Girl, Saffy sets out to find the stone angel that her beloved grandfather bequeathed to her and she discovers just how much she means to her family. This was touching, beautifully written and very, very funny.

My favourite book about a real-life awesome woman was Rosalind Franklin: The Dark Lady of DNA by Brenda Maddox, an excellent biography of a brilliant, determined scientist. 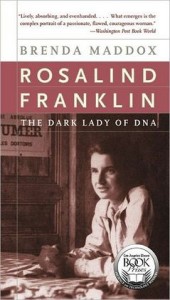 Rosalind Franklin did groundbreaking work in several areas of physics and biochemistry, but is now best known for her work on DNA. Her X-ray photos were appropriated by James Watson and Francis Crick and used to construct their double helix model of DNA. They were awarded the Nobel Prize for this, but her name wasn’t even mentioned in their speeches. Meanwhile, she spent her entire career struggling to obtain research grants and access to facilities, at a time when women physicists were banned from working as instructors at Harvard and were not even permitted to set foot inside the physics building at Princeton. Don’t be put off, thinking this book is all about Difficult Science. (The science bits are fascinating and clearly explained, but you can skim those bits if you really must.) This book also provides a wonderful description of Rosalind’s early years as the “alarmingly clever” eldest daughter of a close-knit English family. Rosalind was devoted to her family and friends, loved beautiful clothes and good food and travel, and died tragically young. I recommend this book if you’re interested in science, or feminism, or simply want to read the story of a fascinating, forthright young woman.

What I’m aiming to read in 2013: The Mapp and Lucia books by E. F. Benson, Keeping the Castle by Patrice Kindl, Wolf Hall by Hilary Mantel, and about five hundred other books on my To Read list.

As I’ve never owned a television set and only recently acquired a computer that plays DVDs, I tend to ‘discover’ TV shows long after everyone else has forgotten about them. This means I go around saying things like, “Hey, have you guys seen this amazing TV series? It’s so funny, and the songs are great, and there are lots of jokes about New Zealand!” and my friends say, “Yeah, we told you about Flight of the Conchords five years ago.”

Anyway, this year my TV ‘discovery’ was Horrible Histories, a BBC series that is (supposedly) an educational show for children. Here’s why I love it:

1. It’s all about my favourite subject – History! And they’ve really done their research (I can vouch for the accuracy of the World War Two bits).
2. It’s hilarious. Each episode is a gleeful, anarchic mix of sketch comedy and animation, with parodies of ads, computer games and TV shows, including Historical Masterchef, Historical Wife Swap, Historical Fashion Fix and (my favourite) Historical Paramedics.
3. It’s hosted by an adorable talking rat with a penchant for puns. The human members of the cast are amazingly talented, too.
4. There’s at least one brilliant musical number each episode – funky monks, Cleopatra as Lady Gaga, the Spartan High School Musical, King Charles II rapping about being ‘The King of Bling’, or a bunch of head-banging, axe-playing Vikings (“We’re gonna set this sleepy town alight – LITERALLY!”). In this clip, Horrible Histories explains why highwayman Dick Turpin was NOT AT ALL romantic or glamorous. Except they’ve put Mat Baynton in eyeliner, a velvet cape and knee-high leather boots. Yeah, not sure they really thought that one through . . .

What I’m aiming to watch in 2013: Hey, have you heard about this new show called Downton Abbey?

Finally, to celebrate Smugglivus 2012, here’s a giveaway. You can win a signed copy of the new Vintage Classics edition of my first Montmaray Journals book, A Brief History of Montmaray, which looks like this: 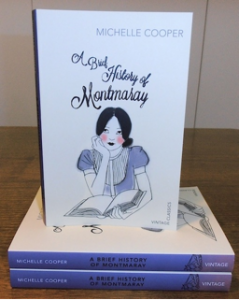 Pretty, isn’t it? For your chance to win, leave a comment below letting us know about your favourite historical book or TV show. Happy Smugglivus, everyone!

Thanks, Michelle! Now for the giveaway – you heard her! Leave a comment here naming your fave historical book or TV show to enter. The contest is open to ALL and will run until Sunday January 13 at 12:01am PST. Good luck!