A Smugglerific Cover: Other Half of the Sky – edited by Athena Andreadis

Today, we are happy to be hosting the cover reveal for another kick-ass book coming from Candlemark and Gleam: The Other Half of the Sky: Evolved Space Opera with Women Heroes, a science fiction anthology that gives voice and life to women of the future created and edited by Athena Andreadis.

Behold! The Smugglerific Cover (and concept)! 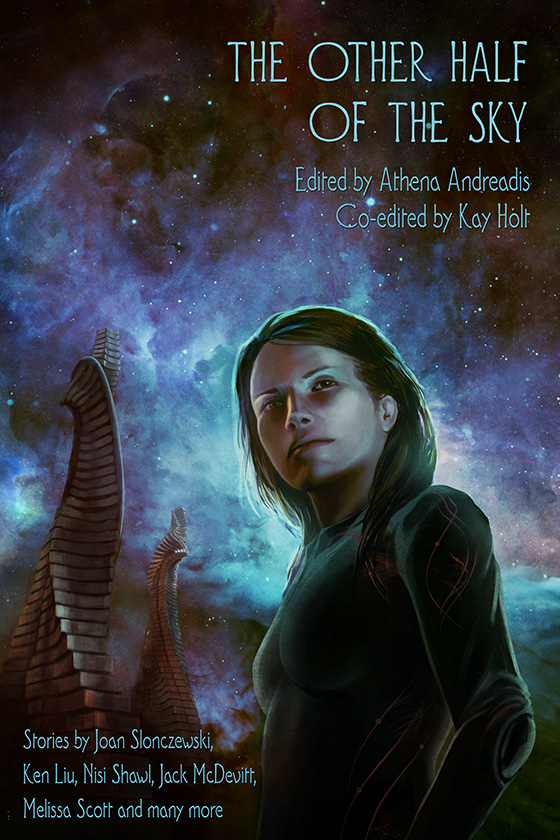 Women may hold up more than half the sky on earth, but it has been different in heaven: science fiction still is very much a preserve of male protagonists, mostly performing by-the-numbers quests. In The Other Half of the Sky, editor Athena Andreadis offers readers heroes who happen to be women, doing whatever they would do in universes where they’re fully human: starship captains, planet rulers, explorers, scientists, artists, engineers, craftspeople, pirates, rogues… As one of the women in Tiptree’s “Houston, Houston, Do You Read?” says: “We sing a lot. Adventure songs, work songs, mothering songs, mood songs, trouble songs, joke songs, love songs – everything.” Everything.

My decision to conjure this anthology came from the simple desire to read stories I like! As I wrote in The Persistent Neoteny of SF and The Cookie Cutter Self-Discovery Quest, almost all SF/F seems YA – and parochial YA at that – even if designated “adult”. Additionally, women heroes are still peripheral in the genre: few are more than sidekicks; even fewer are protagonists in their own right (enough to be remembered like rare gems when they appear: Signy Mallory, Anzha lyu Mitethe, Ellen Ripley, Xena…). So over a brief break in the Florida Keys during last winter’s solstice, I decided to apply Tom Waits’s dictum “You must risk something that matters.” First I wrote down a list of what I wanted:

— Space opera(ish) and/or mythic, but it has to be SF – not fantasy;
— female protagonist(s), who do not (nor are made to) feel guilty about career versus family; in short, women in universes where they’re treated as fully human;
— content and style geared to adult readers, not YA “finding one’s self/place”;
— no “big ideas” Leaden Age SF or near-future earthbound cyber/steampunk.

Then I sent emails to writers who I know can write such stories. They all replied almost instantly: my email pinged every few minutes for the next two days. All who were not already overwhelmed with commitments accepted the assignment. I chose a co-editor whose abilities I trust, decided on a cover artist whose work fit my vision, found a publisher who cared as much about this project as I did, and we were off to the races. It was a lagniappe that while “looking for the best” I ended up with women in the slots of co-editor Kay Holt, cover artist Eleni Tsami, and co-publisher Kate Sullivan of Candlemark & Gleam.

Here is the table of contents. You can also read the first paragraph of each story on my blog.

It is always a revelation to see how writers interpret framework parameters. The stories are completely distinct, as well as original. That may be the fond editor talking, but I’ve been a scientist long enough to be trained in objective assessment! Beyond their other merits, a bonus feature is that all stories pass the Bechdel test – broadly defined, since there are aliens and non-binary humans involved. They also demonstrate that you can have rousing space opera with a sense of limitations and consequences and with “regular” people as protagonists, rather than Chosen Ones.

One of my aims with The Other Half of the Sky was to show that imaginative sensawunda and high-quality writing are not mutually exclusive. I was delighted to see the stories effortlessly achieve this synthesis. Bottom line: ask people to write as complex, nuanced adults about equally complex, nuanced adults – and they do so beautifully. I was equally delighted to see that the cover eloquently and dramatically portrays the content of the stories.

When Athena told me of her intention to edit an anthology of science fiction stories with women protagonists, and asked me if I was interested in making the cover for it, I knew in an instant that I wanted to do it.

We had a brief but enlightening meeting in April at a café with the Acropolis in view. In summer, the stories started coming in, and I read most of them in order to be as close to the overall mood of the anthology as possible. However, the first feel and vision for the cover was formed during that meeting. It had to be something iconic rather than action-oriented, with space as a backdrop and a female character in the foreground as the most prominent elements.

One of my qualms about the depiction of women in illustration is that, more often than not, they are presented as little more than eye candy. I try to deviate from that in my portraits, and make the viewer wonder a bit about the character they’re looking at as a person — what their thoughts may be, where they come from, where they are going, in a broader sense. It went without saying that Athena and I would want such a character present on the cover.

Regarding the character’s appearance, I kept her generic enough so that she could fit any or most of the protagonists of the stories. It was important to set the tone through her expression and stance rather than any particulars of her outfit or features, though I consciously made her dark-haired with brown eyes. Most of the world’s population has this coloration, so I think of it as a more of a human archetype.

Athena was particularly helpful throughout the process of making this image. She had a clear vision of what she wanted the cover to look like, and was precise in communicating it, which made it much easier for me to work along her suggestions. In the end, we were both very happy with what we had on our hands, which is the most important part.

Athena Andreadis was born in Hellás and lured to the US at age 18 by a full scholarship to Harvard, then MIT. She does basic research in molecular neurobiology, focusing on mechanisms of mental retardation and dementia. She’s an avid reader in four languages across genres and the author of To Seek Out New Life: The Biology of Star Trek. She also writes speculative fiction and non-fiction on a wide swath of topics and cherishes all the time she gets to spend with her partner, Peter Cassidy. Her work can be found in Harvard Review, Belles Lettres, Strange Horizons, Crossed Genres, Stone Telling, Cabinet des Fées, Bull Spec, Science in My Fiction, SF Signal, The Apex Blog, World SF, SFF Portal, H+ Magazine, io9, The Huffington Post, and her own site, Starship Reckless.

Eleni Tsami is from Athens, Greece. She studied linguistics at the University of Athens and art at AKTO. She started painting in the early 2000s with a love for fantasy and science fiction. Her work has been featured in book covers (Night Shade Books, Hieroglyphic Press), Digital Artist magazine, and various online galleries. When she’s not working and not otherwise plugged into the internet, she likes to read, play games, and hike.

The Other Half of the Sky will be available in print and digital forms in April 2013, wherever books are sold. And, as usual, paperbacks purchased through the C&G website come with a free digital download, and all books purchased from us directly at www.candlemarkandgleam.com are DRM-free. Yippee! You can read samples here:

A Smugglerific Cover (& Excerpt): This Savage Song by VE Schwab