Who: Paul and Renee of Fangs for the Fantasy, a blog dedicated to reviews of Urban Fantasy from a social justice lens by two people who love the genre.

Please give it up for Paul and Renee and their take on one of the most terrifying creatures on the Internet: 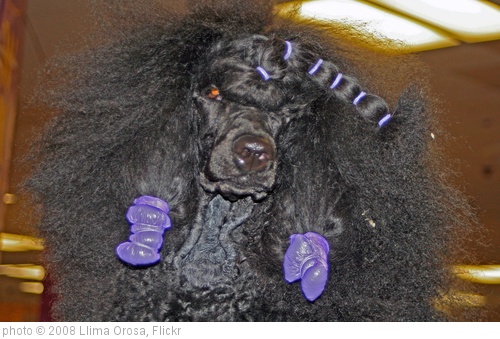 As avid readers of Urban Fantasy we knew that our love of the genre would bring us into contact with some many weird and wonderful creatures. Shapeshifters, fae, angels (always sexy and usually shirtless and quite naughty creatures, all things considered), wendigo (always the wendigo! Every book these days simply must have a wendigo, it’s a rule. Got any mysterious monsters hanging around? Totally going to be wendigos!) and even sparkling vampires.

But there was one creature we were completely unprepared for. It has a tenacity that the most immortal of vampires cannot match, a fury that even the most savage werewolf cannot hope to equal and it is so unpredictable that even the most arbitrary of fae seems stable.

The Fanpoodle is an odd beast, more protective of its Precious than Gollum ever was, the Fanpoodle will swoop in yapping furiously whenever a bad word is levelled against the source of their adoration.

And we’re certainly not immune to turning a little Fanpoodle on some of our most precious books. We may, perhaps, have only just resisted the temptation to get a little Annie Wilkes on some of our favourite authors (what? They were on twitter TWEETING, rather than writing the next book. Which, is totally relevant because the last book ended on a cliffhanger of all things. Clearly we were more than justified. We’re sure Diana Rowland will understand).

Still, despite our own desperate yapping, we can’t help but sigh when one of our less than fawning reviews (which clearly we write because we wish to crush the souls of authors and make them cry their little hearts out and lie, broken and despairing in the ruins of their literary dreams. Hey, everyone has to have a hobby) is greeted with a barrage of yapping and cries of “how dare you, sir/madam! Oh how very dare you?!”. One of these days, we’re sure we will be called out for pistols at dawn.

But to us, it’s more than that. We are not just reviewers, but social justice bloggers, which means we do more than criticise awful writing. Though that’s also vitally important – in the name of the holy editor, we do not need a ten page monologue on how very sad your sad protagonist is. Nor do you need to spend over a paragraph describing how your character picks up the phone – yes Clary of the Shadowhunters, we mean you. For that matter, if your character is going to have hot sex 6 times in a row, please for the love of basic hygiene get them in a shower, or at least hose them off; spare the world the Anita Fug. But beyond awful writing, we also must criticise how damaging these books can be in their depiction of marginalised people (Victoria Foyt, step away from the keyboard, your computer needs an exorcism or, preferably, burning. On a coal fire).

Being fans of this genre, we can completely understand the desire to fanpoodle; (All Hail Kevin Hearne!) however, when fanpoolding means being purposefully obtuse to problematic elements in a story which work to harm historically marginalised people, then there is a problem. Simply because we are talking about mystical creatures, doesn’t mean that it isn’t totally skeevy for a vampire over one hundred years old (Yes, we’re looking at you oh sparkly one) to be crushing on a teenage girl, disabling her truck, watching her while she sleeps and then police her sexuality. The idea that this isn’t grounds to call a cop and run away shrieking because he is designed to be seductive and appealing, simply erases what is blatantly an abusive relationship. This by the way goes double for falling in love with a baby and then grooming her to be your mate, but try and tell that to a twihard. “Imprinting” as Stephanie Meyer so delicately calls it is generally called “Grooming” in the pedophile’s handbook. On a final note, in the modern era, though Daddy may grant you access, it is still up the woman whether or not she wants to be kissed.

Another factor worth mentioning is that having a female protagonist does not necessarily mean that the story itself is pro woman. If the protagonist spends her time judging every single woman she comes across as a shrewish dirty whore, (which never applies to her, of course), can we please stop calling the text feminist? If this author has displayed a tendency to infuse this hatred of women in every single book (yes Charlaine Harris, we’re looking at you) the word that is best applied is misogynist. If you can’t actually use the word vagina and instead are reduced to writing about Yahoo Palaces, (a term we wish we had never heard of, though it could make an interesting drinking game) then clearly, the empowerment of women should be left to others.

The denial of course is always followed with an accusation of not reading the book, or a failure to comprehend the intent of the author. Anything but complete adoration of the work in question will not do. We have to laugh at the very idea that we might have a reading comprehension problem when the argument is coming from people who deny that Cassandra Clare has pretty much written the same series twice. Changing the names of characters and shifting the time period does not mean that you have created a new series; it simply means that you have written the same crappy book yet again. And for heaven’s sake, we know that you have an English degree. Can you stop quoting Dickens in an effort to prove it to us?

When the fanpoodling means justifying as ism, rather than say bad writing, it makes us worry for humanity. And more importantly, it makes us worry for marginalised people – Speculative fiction is the mythology of our time and it’s painful to see the roles marginalised people are reduced to within it. These are the stories of our vast imagination, our greatest fancies, our very dreams (which probably says some terrible things about us that Sookie Stackhouse is one of the champions of our dreams) and currently marginalised people are expected not to dream – but to, maybe, just maybe, accept a supporting role in another’s epic story. Having all characters of colour be reduced to sidekicks is blatant tokenism and does not amount to inclusion. If the protagonist happens to be biracial (Anita Blake and Mercy Thompson) like so many are these days to give them “exotic” magic, having her cut off from her culture of colour hardly counts as inclusion. Reducing gay men to best buddies, who of course are attention whores, dripping in every possible stereotype, is not positive representation. Deciding that these same characters need the intervention of a straight woman (Parasol Protectorate Series) to guide their romantic lives doesn’t exactly empower these characters either, sorry, my precious pomegranate seeds, it doesn’t. Yet, time and again, the Fanpoodles would have us believe this is inclusion, that these isms are non-existent or justified.

The list could go on forever (believe me, we were tempted. But we ran out of booze).

This does not only greatly add to our grey hairs (and alcohol consumption. Ooooh sweet Baileys, without you we would never have gotten through the Vampire Academy Series – and we had to break out the rum for the Fallen Series) but it also harms Speculative Fiction. If there’s one complaint we commonly hear in the genre, it’s that it isn’t taken seriously. People mock us about our love for vampires, space ships and dragons (right before we hit them with our lightsabers) and consider us childish or silly. Well, sad thing is folks, if we don’t put on our big kids’ pants and treat our genre as deserving of respect then no outsider will respect us.

And part of being taken seriously is subjecting our stories to criticism, even harsh criticism. The yapping of fanpoodles impresses no-one. And if you respect your Precious, you will respect it enough to treat it seriously and expect it to be the best it can be.

So for this Smugglivus, and the New Year, we want a full set of Fanpoodle muzzles, and a big box of destroyed rose tinted glasses – and a whole bucket load of snark (snark is the silver bullet for Fanpoodles)! Happy Smugglivus readers, and may your New Year be full of big meanies, Goodreads “Bullies”, Amazon Review Mafia and lots of folks telling it like it is – no matter how bad it is.

Thank you, Paul and Renee!

Fangs for the FantasySmugglivusSmugglivus 2012
15 Comments
By Ana