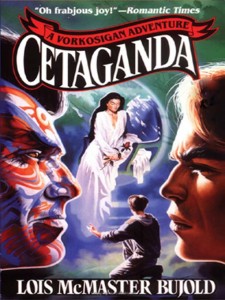 The fifth installment of the Hugo-award winning adventures of Miles Vorkosigan.

In this novel Miles Vorkosigan and his cousin Ivan travel to Cetaganda, the long-standing enemy of Barrayar, to represent their Barrayar at the funeral of the mother of the Cetagandan emperor. From the moment they arrive they are swept into a complex and little understood political game between elements of the Cetagandan ruling class.

Stand alone or series: Book 5 in the Vorkosigan Saga

How did I get this book: Bought (thank you, Baen ebook model, I love you with all my heart)

Why did I read this book: I love Miles Vorkosigan. I really, truly do. He’s a hilarious, heartfelt character that never fails to impress – and I am ashamed to admit how pitifully, poorly-read I am in this series. With Smugglivus each year, Ana and I get some breathing room – we can finally take the time to read older titles that we’ve had languishing on our TBRs for years, and finally (FINALLY!) I had time to get back to the incorrigible Miles and his misadventures. I started reading Cetaganda nearly 2 years ago (GASP I KNOW!!!!) and kept getting pulled away by other obligations. This December, I put my foot down. My goal? To get through at least 2 more Vorkosigan books by 2013.

Miles Naismith Vorkosigan has come a long way since his miserable attempt to qualify for the Barrayaran Military Service Academy – since then he’s created a commanding (if solely based on smoke and mirrors) mercenary fleet, saved the Barrayaran Emperor, and thwarted a full-out war. Officially serving out a position as Imperial Security Courier, the brilliant (if physically less-appealing) Miles and his cousin the handsome (if decidedly less-brilliant) Ivan Vorpatril are sent on a diplomatic envoy to Cetaganda to attend the state funeral of the late Celestial Empress. Trouble starts immediately, however, when Miles and Ivan’s ship is boarded by a Ba (the genetically engineered, genderless servants of the Haut class of Cetagandan women), who leaves behind a strange object. When that same intruder, known as the Ba Lura, is found dead shortly later – an apparent “suicide” – the plot thickens. Apparently, Ba Lura was the most senior and trusted of the late Empress’s servitors, and the object left behind on Miles’ ship is a unique key; a Cetagandan artifact of paramount importance. Someone is trying to frame Barrayar for stealing the key, and it is up to the brilliant Miles to figure out which Cetagandan lord is playing at war and thwart his efforts before Barrayar is drawn into the mix. (OK, there’s also the added motivation of Miles trying to look impressive in front of a beautiful Haut lady, too.)

Miles Vorkosigan remains one of my favorite characters in all of science fiction (heck, probably in all of fiction) – and Cetaganda only solidifies this elevated position. Miles may seem like he has the world going for him – he’s the only son of a wealthy and admired military father and mother – but in-utero was the victim of a poison gas attack, which resulted in physical disabilities for Miles (namely, his stunted height at under 5′ tall and his extremely brittle bones), even more glaring because of the importance that Barrayar places on physical prowess. In the first books of the series, Miles is frequently referred to by his fellow Barrayans as a mutant because of his appearance which deeply affects the way Miles perceives of himself (even if this is subconscious) and his urge to prove everyone wrong with his superior intellect. In Cetaganda, the internal desire that Miles has to please and to become a proper hero has never been more glaring. In this world, where beauty is a genetically-engineered given, where the Haut females are so breathtakingly gorgeous and elevated that they mask themselves from any lower lifeforms behind their protective bubbles, Miles is utterly out of place. And for the first time in the series, it becomes clear that Miles’ decisions are eminently self-serving – he needs to prove himself a hero, to impress the beautiful Haut Rian on the one hand, but also to show that he can do it all alone. This added depth to Miles’ character is remarkable, and in my opinion makes Cetaganda all the more memorable.

I should also make sure to say – this somewhat uglier side of Miles’ personality does not come at the expense of the entertainment value of the book. Because people. Miles is hilarious. As per usual, there were many parts of Cetaganda that caused me to laugh out loud because of Miles’ (or should I say, Lois McMaster Bujold’s) superior wit. Ivan Vorpatril also is inching his way up in my heart as a favorite character because he is so single-minded (but charming in the extreme, of course) in his pursuit of a good time. His particular conflict in Cetaganda – the victim of a practical joke instigated by Cetagandan ghem lord Yorobev – is hilarious, as he earns a reputation as a tireless, lady-pleasing giver in bed.

And I have yet to say anything of the story itself! I loved the world of Cetaganda with its varied, stringent rules and rigid social hierarchy of Ba, Ghem and Haut. The power struggle within the Cetagandan empire, with the Haut women atop the social structure (if completely behind the scenes) is fascinating, and the preoccupation with genetic perfection – no matter how far it takes them from human – is also beautifully conceived. What paled in comparison, however, was the mystery of the Ba Lura’s murder and the identity of the Cetagandan rabblerouser. While the progression of the mystery is well done and well written per Bujold’s normal high standard, the storyline wasn’t as captivating as The Warrior’s Apprentice or The Vor Game. Of course, your mileage may vary – as a lighter standalone adventure, Cetaganda certainly feels like the kind of book I would read over and over again.

Suffice it to say, I loved Cetaganda. Good thing I have Ethan of Athos lined up on my ereader next… (although it appears this next book is Miles-less?! Fellow Vorkosigan fans, any insight you can give me?!)

Book Review: Every Which Way but Dead