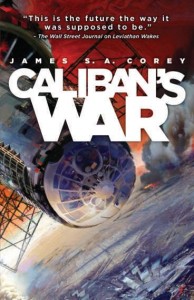 We are not alone.

The alien protomolecule is clear evidence of an intelligence beyond human reckoning. No one knows what exactly is being built on Venus, but whatever it is, it is vast, powerful, and terrifying.

When a creature of unknown origin and seemingly impossible physiology attacks soldiers on Ganymede, the fragile balance of power in the Solar System shatters. Now, the race is on to discover if the protomolecule has escaped Venus, or if someone is building an army of super-soldiers.

Jim Holden is the center of it all. In spite of everything, he’s still the best man for the job to find out what happened on Ganymede. Either way, the protomolecule is loose and Holden must find a way to stop it before war engulfs the entire system.

CALIBAN’S WAR is an action-packed space adventure following in the footsteps of the critically acclaimed Leviathan Wakes.

Stand alone or series: Book 2 in the Expanse series

Why did I read this book: I truly enjoyed the first book in this series, last year’s Leviathan Wakes. Heck, I liked it so much that it made my notable reads of 2011 list! Needless to say, I was excited to read Caliban’s War – the reason I took so long to review it? Its massive doorstopper length. But, thanks to the magic of Smugglivus, I finally had the time to read this bad boy.

**NOTE: THIS REVIEW CONTAINS UNAVOIDABLE SPOILERS FOR BOOK 1 IN THE EXPANSE SERIES. If you have not yet read Leviathan Wakes and want to remain unspoiled, look away!**

It has been an unsettling year following the Eros incident, in which a powerful corporation attempted to weaponize an alien protomolecule, ending in the infection and destruction of millions of human lives (and near full-scale interplanetary war between Earth, Mars, and the Outer Planetary Alliance). Thanks to the dogged work of a broken detective on his last leg, that protomolecule was diverted from destroying Earth, instead crash landing on Venus – and under the canopy of Venus’s dense, toxic atmosphere, the molecule shifts and evolves.

While a tenuous kind of peace has been reached between Earth, Mars, and the belters of the outer planets, the careful balance between these powers is thrown into another tailspin when the UN and Mars Alliance erupt into a firefight on Ganymede. Surprisingly, though, they aren’t fighting each other. An impossible alien monster, a hybrid creature impervious to human weapons, has appeared and just as mysteriously disappeared on the Jovian moon’s surface – an alien creature that somehow is connected to whatever is growing on Venus.

In the midst of this chaos are four key characters: James Holden, dashing captain of the Rocinante, who was instrumental in the Eros event and will be as the events on Ganymede unfold; Chrisjen Avasarala, wizened, tough-as-nails UN politician who has been playing the game longer than Holden’s been alive; Martian Marine Sergeant Roberta “Bobbie” Draper, the only survivor of the alien monster’s rampage on Ganymede; and Prax Meng, scientist and single father, whose daughter Mei was abducted just before the attack on Ganymede. These four characters’ paths will converge, and the fate of the solar system and humanity itself, rests in their hands.

From a plotting perspective, Caliban’s War has a great core story and conflict. Ganymede is a stronghold in the far reaches of the solar system – Jupiter’s largest moon, and the only moon in our solar system with a magnetosphere, Ganymede is a safe haven where food can be grown and shipped, where pregnant women can deliver, where children can grow up with minimal fears of radiation. With the attack on Ganymede, the moon’s delicate ecosystem goes into catastrophic shock, cascading down increasing levels of chaos and shutdown – and amidst all this, one man desperately searches for his missing daughter, who was abducted by the very people who may have been behind the Eros event (with the help of Holden and his crew, of course). Ganymede’s demise has interplanetary ramifications politically, too – which is where Avasarala comes in, enlisting the testimony and help of marine Bobbie to figure out just who is behind the attack. While the overlapping storylines are fantastic in theory and the structure of the book itself works, the actual execution is a bit wanting. Overly verbose, with plenty of extraneous, repetitive scenes (particularly with Avasarala and Bobbie on Earth, with the assistant undersecretary’s frequent swearing/badass act on a never ending loop), Caliban’s War starts to sag after the initial shock-and-awe of the first third of the book are finished. The politics are basic paint-by-numbers, the villains obvious and one-note.

Additionally, while it’s nice to have some familiar faces back in the mix (namely Holden, Naomi, and Amos), there’s something superficial about Holden in particular that grates. In Leviathan Wakes, the heart of the book rested with the gray, forlorn detective Miller and not the bland, homogenous hero Holden; the same can be said here of Caliban’s Wake as the emotional heart of this book lies with the intense Prax Meng (in my opinion), and his quest to find lost daughter Mei. On the bright side, I thoroughly enjoyed Avasarala’s character (repetition aside), as I did Bobbie Draper, who is a self-proclaimed superhero in armor, but one who is not immune to post traumatic shock after watching her team gunned down before her eyes.

For all my complaints with characters and uneven pacing, when our characters all meet up by the novel’s final dramatic act, it’s a hell of a finish. Ultimately, Caliban’s War is a fun book. It’s not a flawless one, and it’s not quite as good as its predecessor, but it gets the job done. I’ll be around for Abaddon’s Gate, most definitely.

“Snoopy’s out again,” Private Hillman said. “I think his CO must be pissed at him.”

Gunnery Sergeant Roberta Draper of the Martian Marine Corps upped the magnification on her armor’s heads?up display and looked in the direction Hillman was pointing. Twenty-five hundred meters away, a squad of four United Nations Marines were tromping around their outpost, backlit by the giant greenhouse dome they were guarding. A greenhouse dome identical in nearly all respects to the dome her own squad was currently guarding.

One of the four UN Marines had black smudges on the sides of his helmet that looked like beagle ears.

“Yep, that’s Snoopy,” Bobbie said. “Been on every patrol detail so far today. Wonder what he did.”

Guard duty around the greenhouses on Ganymede meant doing what you could to keep your mind occupied. Including speculating on the lives of the Marines on the other side.

Reading Next: The Crimson Crown by Cinda Williams Chima