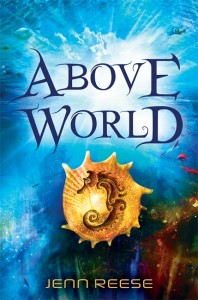 Thirteen-year-old Aluna has lived her entire life under the ocean with the Coral Kampii in the City of Shifting Tides. But after centuries spent hidden from the Above World, her colony’s survival is in doubt. The Kampii’s breathing necklaces are failing, but the elders are unwilling to venture above water to seek answers. Only headstrong Aluna and her friend Hoku are stubborn and bold enough to face the terrors of land to search for way to save their people.

But can Aluna’s warrior spirit and Hoku’s tech-savvy keep them safe? Set in a world where overcrowding has led humans to adapt—growing tails to live under the ocean or wings to live on mountains—here is a ride through a future where greed and cruelty have gone unchecked, but the loyalty of friends remains true.

Stand alone or series: Book 1 in the Above World Trilogy

Why did I read this book: Above World first caught my eye at the end of last year, and I was thrilled to receive a copy from the publisher once the official release date hit. But, as so sadly happens in my particular casa de smuggler, Above World was buried on my TBR and sat there quietly, ignored. When author Jenn Reese contacted us recently about a review and agreed to a Smugglivus post, I knew it was finally time to get off my sorry butt and finally read this book.

Aluna has lived her entire life – all thirteen years – under the sea. She is one of the Kampii, a water-born splinter group of humans that took to the oceans generations ago, to escape the death and wastes of the earth above. Aluna loves the water and her people, but she’s frustrated with the future that has been set for her with the Kampii. Because their numbers are ever dwindling, all Kampii women are prohibited from the exciting and dangerous jobs (like hunting) and must focus on the important job of, one day, rearing children. At the same time as the Kampii’s population dwindles, their tech also starts to fail at an increasing rate – every Kampii is given a “shell” that allows them to breathe underwater, powered by a mysterious source called HydroTek, created by wise and powerful ancestors many generations before.

Over the decades, the Kampii have lost the knowledge of their forebearers, trusting blindly that their technology will always remain in tact and provide for their needs – so when shells start to fail and people start to die, Aluna is terrified at the stagnant, passive stance of the Kampii Elders. Determined to fight for the future of her people, to stop others from dying needless deaths, Aluna decides to spurn the stance of her tribe leaders and searches for answers in the world above. With her best friend Hoku, Aluna sets off on an adventure filled with hidden truths, fierce warriors, new friends, and terrifying enemies.

The first novel in a planned trilogy, Above World is a truly fantastic start to what might just be a new favorite series. In other words: I loved this book. Set in a wonderfully imagined future world, solidly written, with memorable characters and strong central themes, Above World is pretty freaking awesome.

One of my favorite things about this book is the worldbuilding. Set in a future version of our own Earth, Above World is, in fact, a post-apocalyptic future dystopia of sorts. The human race has fallen to overpopulation, plague, and strife; in order to survive, humanity has used science to change their very physiology. Some have taken to the skies, becoming winged Aviars with hollow bones and accustomed to high altitudes; others have taken to the depths as Kampii, with fish tails, dense muscles and bones to withstand extreme deep, cold, and dark. These different splinter groups – adapted to different environments from desert planes to caves – are fascinating, and even more fascinating is the manner in which we learn about the fate of all these different groups and the ancestors who made the choice to embark on this post-human future. There are no huge info-dumps, no awkward or inorganic relays of this data – everything unfolds gracefully, smartly, over the course of the book. While I’m not sure that everything actually makes sense (the easy adaptation that Aluna and Hoku have on land from a life spent in the sea, most notably in their speech and ability to move feels a little off), it doesn’t really matter because there are plenty of other nuances that make the experience worth it – Aluna discovering her speed on land for the first time during a sparring match, for example.

I also love that to these characters – Aluna, Hoku, Callie and Dash – technology is akin to magic. We see Hoku and Callie in particular struggle to understand the mechanics behind the tech (from electricity to audio/video, and a particular programmed robotic pet), but for the most part, the underlying principles of the technology that has shaped their different peoples and their future remains an advanced mystery. It’s a rather elegant solution, really, and one I appreciated wholeheartedly.

From a character perspective, Above World also shines. I love, love, LOVE Aluna. She’s impulsive and fearless, fiercely devoted to her people and to her friends – but that doesn’t mean she’s flawless. She acts without thinking and gets herself into a very big pickle by the end of the book. The best thing about this? She realizes that her constant rushing headlong into trouble can be a very bad thing. Thankfully, her best friend Hoku – the boy that tends to freeze in the face of danger, but has a huge heart and the brains to match – tends to bail her out in the nick of time. There’s also Callie the Aviar, who struggles to fit in with her people and live up to her mother’s legacy (but who eventually does, in spades), and Dash the Equine, who is perhaps the least fleshed out of the main cast, but still a strong figure and foil to Aluna.

Of course, there are villains galore, too. I don’t want to spoil too much about them, except that they are pretty horrific – I’m talking borg-esque, hybrid human/mech/animal parts nightmares. And the identity of the villain? Also pretty cool. There are high stakes, and dark turns, and…well, I’m excited to see what happens next.

Suffice it to say, I loved this book and I eagerly await book 2, Mirage. Absolutely recommended, and a notable read of 2012.

ALUNA SWAM TOWARD the abandoned outpost, her heart pounding, her breathing necklace pulsing at her throat. She kicked her legs harder, wishing it were tomorrow. Wishing she already had her tail. With a tail, she could speed through the water, fast as a dolphin.

Goldenfins and shiny-blues darted out of her way. Most of the sun’s light was gobbled up by the ocean above her, but she could still see every frond of kelp, every sprout of rainbow coral, every pair of eyes hidden deep in a hidey- hole. The ancients had blessed the Kampii with everything they needed to survive underwater: powerful tails, thick bones and tough skin, adaptable vision, breathing necklaces . . . everything except the ability to ?x their own tech when it started to fail.