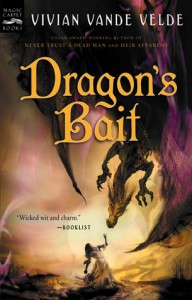 Fifteen-year-old Alys is not a witch. But that doesn’t matter–the villagers think she is and have staked her out on a hillside as a sacrifice to the local dragon.
It’s late, it’s cold, and it’s raining, and Alys can think of only one thing–revenge. But first she’s got to escape, and even if she does, how can one girl possibly take on an entire town alone?
Then the dragon arrives–a dragon that could quite possibly be the perfect ally. . . .

Why did I read this book: I saw this book listed at a recent EW article as an unmissable YA novel. It caught my attention.

Oh book, why you make me so torn?

I first heard about Dragon’s Bait through this piece on Entertainment Weekly about unmissable teen reads. And because it was an older title and because the Publishers Weekly review (which I sought after I read the EW article) said it is a “thoughtful mainstream fantasy with a gently feminist slant”, I decided I needed to read it soon.

Basically, the story follows a young girl, fifteen-year-old Alys, as she is accused of being a witch by her neighbours and summarily convicted in an unfair trial by the visiting Inquisitor. She loses everything and worst of all, Alys’ sick father dies in front of her eyes as she is dragged away to be sacrificed to the local dragon.

Alys thinks she is all but dead when, to her surprise, the dragon – who shape-shifts into a hot young man (obviously) called Selendrile– does not kill her. Instead, he listens to her story and offers to help her to avenge herself.

And you know, I can totally see where both EW and PW are coming from but at the same time…no, not really?

On the one hand we have a quick story with a fairytale vibe. Plus, Alys is a great heroine. Her voice is engaging, ironic and questioning. Her father has been teaching her to work on his workshop against the mores of their time where women don’t actually work at all and she loves the feeling of being useful.

Then when she is taken to be sacrificed to the dragon, she wonders why is it that only maidens are always the ones to be sacrificed? And the dragon-boy brings to her attention that dragons don’t actually make those demands at all as they couldn’t care less who they eat. Those choices are made by the men who rule the towns and who perceive maidens (young unmarried girls with no profession) as worthless. This could actually be taken as really cool meta-textual observation about the way we have chosen to write these stories about dragons and maidens over time.

On the other hand, there is very little character development when it comes to the secondary characters, very little thought about character-motivation and a confusing world-building that is both historical and fantastical but doesn’t really care about pesky historical details or in presenting a carefully constructed fantasy world.

Not to mention that there is a fairly heavy-handed, shallow moral lesson about revenge and how bad it is. And if yes, Alys’ arc is interesting in the way that allows Alys to take control of her own acts by becoming less and less reliant on the dragon’s help and coming up with her own plans, it is also incredibly frustrating how it plays out. Because in the end, Alys is still rescued by dragon-boy after deciding that her feelings of revenge are so bad she decides that the right course of action is to take the blame for EVERYTHING bad that has EVER happened in the village and I am like: WHY. It is such an out-of-character thing to do, all the more so because after she is rescued, those guilty feelings are never addressed again?

And then we have the romance between Alys and Selendrile. And at first it is great to see addressed the inevitable allure of the not-so-human, dark, older hot guy at the same time that showed Alys mistrusting him and fearing him for the monster that he is. And for the greatest part of the novel – till the very end – Alys is very unsure about his true feelings and fears he will EAT/KILL HER eventually. But then they end up together anyway in the most abrupt ending of ALL TIMES in which Alys ends up FOLLOWING him because she has NO OTHER CHOICE, even though he possibly EATS PEOPLE and doesn’t really show his emotions toward her except when it comes to mocking her humanity. He is very good at THAT.

And in a way, this is a really interesting choice and it points out to a darkness and to the fact that Alys wants to be with this creature but because it is so abrupt, this choice goes unquestioned and unchallenged for its clearly problematic aspects.

Because this was published 20 years ago, maybe it is worth reading Dragon’s Bait as a historical piece of YA fiction to see how far YA has come in terms of writing and character development but also how little it has changed in terms of its most obvious problematic romantic tropes?

Yeah, I will go with that.

Then she realized the dragon hadn’t seen her, and that if she stayed still for a few moments longer, she was free. But she was soaked to the skin and cold, and she hadn’t eaten anything since early morning, and she was an orphan with nowhere, absolutely nowhere, to go. And she remembered the wolves.

Her choices, as she saw them, were to die quick or to die slow.

Standing, she flung a rock with all her might. “You stupid dragon!” she screamed. “Come and get me!”

Rating: I really do not know how to rate this. It is a readable, enjoyable, quick read but one that is also too shallow and problematic for me to recommend without reservations.