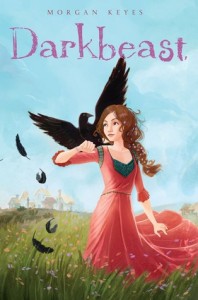 A girl’s love for her raven may put her life in jeopardy in this gripping tale.

In Keara’s world, every child has a darkbeast—a creature that takes dark emotions like anger, pride, and rebellion. Keara’s darkbeast is Caw, a raven, and Keara can be free of her worst feelings by transferring them to Caw. He is her constant companion, and they are magically bound to each other until Keara’s twelfth birthday. For on that day Keara must kill her darkbeast—that is the law. Refusing to kill a darkbeast is an offense to the gods, and such heresy is harshly punished by the feared Inquisitors.

But Keara cannot imagine life without Caw. And she finds herself drawn to the Travelers, actors who tour the country performing revels. Keara is fascinated by their hints of a grand life beyond her tiny village. As her birthday approaches, Keara readies herself to leave childhood—and Caw—behind forever. But when the time comes for the sacrifice, will she be able to kill the creature that is so close to her? And if she cannot, where will she turn, and how can she escape the Inquisitors?

Why did I read this book: I stumbled across this title while browsing at my local bookstore and fell in love with the synopsis – which of course conjured warm memories of Philip Pullman’s daemons, but with a dark twist. I snatched this book up and could not wait to start reading it.

In Keara’s world, every newborn child is bound to a darkbeast, a magical animal that will be the child’s constant companion, and with which its bound child can communicate through thought and speech. Over the years as a child grows, it will make offerings of dark emotions to its darkbeast, such as hate, fear, jealousy, or anger. In turn, the darkbeast absolves and teaches the child the error of its ways. This process of offering and absolution continues until the child reaches her twelfth year – at which point she must kill her darkbeast and become an adult member of society.

It has always been thus.

Keara has long awaited her twelfth name day – the youngest of three sisters, she longs to leave childhood behind and become a woman. Once she becomes an adult, she will move to the woman’s shared tent, she will be allowed to watch the Travelers perform their revels, and she will finally be seen as a woman in the eyes of her mother. But Keara’s twelfth year comes at a terrible cost, and she does not know how she will be able to kill her darkbeast, a raven named Caw, who is Keara’s dearest companion and beloved friend. When the time of the ceremony comes, Keara makes a daring, rebellious choice – to defy tradition and to save Caw. Together, the girl and her darkbeast flee Keara’s village home and take to the road, avoiding the pursuit of the Inquisitors, who will stop at nothing to cleanse the unpious and inflict their torture on lost souls to bring them back to the Twelve Gods. On the road, the pair find solace in the employ of a skilled troupe of Travelers – actors that move from town to town – but when Keara’s presence threatens to hurt her new friends, and as the Inquisitors draw near, she must muster the strength to tell the truth, to stoke the rebellious attitude within that made her save her darkbeast.

The first middle grade fantasy novel in a planned series, Darkbeast accomplishes a tricky feat. Morgan Keyes blends a medieval religious society in a believable and compelling fantasy world – one that is nuanced enough for older readers, but still engaging and accessible for a middle grade audience. There are few books that manage to walk this tightrope – the early Harry Potter novels and Philip Pullman’s His Dark Materials books immediately spring to mind – and Keyes’ Darkbeast does this with surefooted grace. In short: Darkbeast is one effective, memorable novel.

Let’s talk worldbuilding. Who doesn’t love the idea of an animal familiar? Who read The Golden Compass/The Northern Lights and didn’t want a Pantalaimon of one’s own? In Darkbeast, Keyes takes the idea of an animal familiar and twists it – instead of golden monkeys and lynxes, the familiar beasts in Keara’s world are toads and snakes, lizards and ravens. Instead of cuddly (and there’s nothing wrong with cuddly!), darkbeasts are creatures that inspire revulsion or fear – which is fitting with their function as magical creatures that absorb the ill emotions of their bonded child. And this, perhaps, is one of the things that makes it easier for a twelve year old to kill its closest companion. It’s a brilliant concept, and one that makes Keara’s choice to save her friend Caw – whom she cannot kill any more than she can cut off her own foot, as she thinks at the decisive moment – all the more powerful. When Keara starts to question the wisdom of killing one’s darkbeast, she starts down a rabbit hole of doubt and knowledge. Why would benevolent gods demand the deaths of darkbeasts? Why do the Inquisitors and tax collectors and the great Primate have so much power, while everyone else has so little? All of these questions, and more, are brought up subtly throughout the book and invite readers to question and rebel as much as heroine Keara does.

From a character perspective, Keara is a fantastic, deserving, and endearing heroine. You know how sometimes you read a book and cannot believe in the main character – either they sound too old or too young for their purported age, or something just seems off? This is certainly not the case with young Keara, who comes across as a living, breathing, flawed twelve year old that has her missteps, but also has a huge heart that guides her actions. I think I fell in love with Keara from the beginning, when she continues to sneak out of her home, explicitly against her mother’s wishes – not because she’s a bad child, but because she cannot keep herself away from the revels, and cannot sit idly by when her fascination and curiosity burn so brightly. In contrast, Keara’s darkbeast Caw is somewhat less defined – my only real disappointment with the book is how quiet Caw is, and how one note his frequent jokes for food and scraps to cover up his wisdom.

This flaw aside, Darkbeast is a brilliant middle grade novel that is even better upon reflection. There is so much room for more – what with formal rebellion brewing in the background – so I’m keeping my fingers crossed that we will get more books in this beautiful darkbeast-filled world. Absolutely recommended, for readers young and old alike.

Notable Quotes/Parts: Not an excerpt from the novel, but the short story from which Darkbeast arose! In the words of the author:

The novel Darkbeast grew out of a short story. There are many differences between the novel and the story — some characters’ names have changed, and the original main character was four years older than Keara in the novel. The ideas, though, and the basic plot remain the same.

Go HERE to read the full story. Also, if you check out the author’s website, you can take a quiz to discover your own darkbeast (mine is a spider, huzzah!).

Reading Next: Keeper of the Lost Cities by Shannon Messenger

Over at Kirkus: Above by Leah Bobet