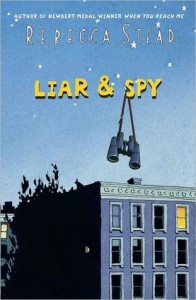 At the moment, Georges has a lot going on. Dad was laid off so Mom has started working extra shifts at the hospital, and they had to sell their house in Brooklyn and move into an apartment. One good thing about the new building is Safer, an unusual boy who lives on the top floor. He’s determined to teach Georges how to be a spy. Their main case: spy on the mysterious Mr. X in the apartment above Georges. As Georges and Safer go deeper into their Mr. X plan, the line between games, lies, and reality begin to blur.

How did I get this book: Review copy from the publisher via NetGalley

Why did I read this book: I loved Rebecca Stead’s When You Reach Me and have been on tenterhooks for another book from her.

In Middle Grade, books about young boys having a hard time at home and/or at school are a dime a dozen and as such it is imperative that new books with this particular storyline offer something unique to the reader.

Well, LOOK NO FURTHER, for Liar & Spy is one such book.

Georges (with a silent s, his parent’s wanted to pay homage to their favourite painter Georges Seurat) is having a hard time. At home, his father was lay-off his job as an architect and the family had to move to a new, smaller place whilst he struggles to find new clients as a freelance architect. His mother, a nurse, had to take on double shifts and he barely sees her (they communicate via scrabble messages left on his desk overnight). At school, his former best friend Jason now sits on the popular table and simply watches as Georges is harassed by the school’s bullies. There is also the ongoing Science Unit of Destiny and in ten days, Georges’ Science classmates will find out which of them is destined to have a Tragic Death or to find True Love. Georges is convinced it is going to be him.

Things start to look up – well, sort of – when Georges meets his new neighbours, the siblings Safer and Candy (two home-schooled kids whose parents let them pick their own names) and join their Spy Club in their ongoing investigation on their sinister neighbour (who may or may not be a serial killer).

Liar & Spy is a brilliant book. It is clever, subtle, funny and deeply affecting. It features a plethora of great characters (which includes its setting, Brooklyn) from adults to kids alike (good lord, how I loved Candy); it features great interactions between Georges and his parents or Candy/Safer and their parents. It is a book that features serious issues (bullying, psychological problems, fear of loss, economical stress) without being a book about issues. It also features a language revolution as thought-out by a kid, lessons about the science of taste, Seurat’s painting techniques (which are also metaphors to life) AND keen observations of the ridiculousness of middle grade school’s cliques – all of it without a trace of didacticism.

I also loved how it explores two different outlooks on how to cope with bullying:

I shrug. “It’s just dumb stuff. You know, kids being kids. I know none of it will matter in a few years.”

He stares at me. “Who told you that?”

“Mom. She always says to look at the big picture. How all of the little things don’t matter in the long run.”

He blinks. “But they matter now, Georges. They matter a lot. What were you planning to do, just hold your breath all the way through middle school?”

“No. No one can hold their breath that long.”

“Look, I know mom talks about the big picture. She wants you to remember that you will find new friends, that life is always changing, sometimes in really good ways. But life is also what’s happening now, Georges. What Dallas and Carter are doing is happening now, and you can’t just wait for it to be over. We have to do something about it. Now. “

It’s weird, because I know mom is right about the big picture. But Dad is right too: Life is really just a bunch of nows, one after the other.

Although, in fairness when you think of it, the resolution of George’s problems with bullying perhaps do come by too easily – but it is hard to criticize when said resolution is done with such aplomb.

Not to mention that it also features one of the most hilarious moments I have ever had the pleasure to read in a book: when one of the characters describes the moment when, as a young child, he realises that animals turn into food – cows are meat, pigs are pork – but chickens? Chicken is chickens. Excuse me while I giggle like a maniac. It is still funny after a few days. What can I say? Perhaps I am easily amused.

But I am not so easily moved and despite the apparent kookiness of the plot, Liar & Spy is a deeply moving story.

Plus it comes with two twists that are written cleverly into the story without being gimmicky Shazam moments. Once you realise what they are, it is easy to go back and realise they were obvious all along. This seems to be a Rebecca Stead thing as well: clever narrative choices.

To borrow from the book’s recurrent conversation about the Science of Taste- Liar & Spy is an absolutely delicious book, cementing Rebecca Stead’s place as a favourite author. A notable read of 2012.

Notable Quotes/ Parts: Please read this excerpt from its opening chapter. I was hooked from the get-go.

The Science Unit of Destiny

There’s this totally false map of the human tongue. It’s supposed to show where we taste different things, like salty on the side of the tongue, sweet in the front, bitter in the back. Some guy drew it a hundred years ago, and people have been forcing kids to memorize it ever since.

But it’s wrong–all wrong. As in, not even the slightest bit right. It turns out that our taste buds are all alike, they can taste everything, and they’re all over the place. Mr. Landau, seventh-grade science teacher, has unrolled a beaten-up poster of the ignorant tongue map, and he’s explaining about how people have misunderstood the science of taste since the beginning of time.

Everyone in my class, even Bob English Who Draws, is paying attention today, because this is the first day of “How We Taste,” also known as The Science Unit of Destiny. They all believe that sometime in the next ten school days, at least one person in the room is going to discover his or her own personal fate: true love or tragic death.

Yes, those are the only two choices.

While the rest of the class is hanging on every syllable that comes out of Mr. Landau’s mouth, I’m looking at the false tongue poster and I’m kind of wishing it wasn’t wrong. There’s something nice about those thick black arrows: sour here, salty there, like there’s a right place for everything. Instead of the total confusion the human tongue actually turns out to be.