Book Review: Between Shades of Gray by Ruta Sepetys

Title: Between Shades of Gray 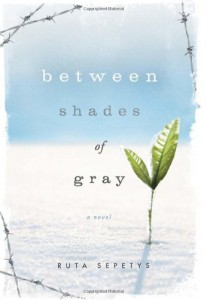 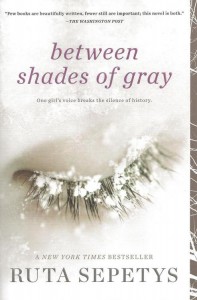 Lina is just like any other fifteen-year-old Lithuanian girl in 1941. She paints, she draws, she gets crushes on boys. Until one night when Soviet officers barge into her home, tearing her family from the comfortable life they’ve known. Separated from her father, forced onto a crowded and dirty train car, Lina, her mother, and her young brother slowly make their way north, crossing the Arctic Circle, to a work camp in the coldest reaches of Siberia. Here they are forced, under Stalin’s orders, to dig for beets and fight for their lives under the cruelest of conditions.

Lina finds solace in her art, meticulously–and at great risk–documenting events by drawing, hoping these messages will make their way to her father’s prison camp to let him know they are still alive. It is a long and harrowing journey, spanning years and covering 6,500 miles, but it is through incredible strength, love, and hope that Lina ultimately survives. Between Shades of Gray is a novel that will steal your breath and capture your heart.

Why did I read this book: This novel has been nominated for a slew of awards and honors – the Golden Kite Award for Fiction, Cybils Award Nominee for Young Adult Fiction (2011), William C. Morris YA Debut Award Nominee (2012), ALA Teens’ Top Ten Nominee (2012), and the Carnegie Medal in Literature Nominee. Additionally, Between Shades of Gray made a number of “Best of 2011” lists (including many of our own Smugglivus guest authors and bloggers) – all this prompted me to buy the book. And, since I’ve been in a historical fiction type of mood, I steeled myself for a harrowing, difficult read about the Lithuanian experience in WWII.

Members of the erudite middle class in 1940s Lithuania, Lina and her family lead a comfortable, happy life. Daughter to a doting, beautiful mother and professor father, older sister to a sweet (if mischievous) younger brother, fifteen year old Lina has the world and all its promise ahead of her, especially when she receives the news that she has been accepted into one of the most prestigious art schools in all of Europe.

But one night in 1941, Lina’s home is invaded by the NKVD – the Narodnyy Komissariat Vnutrennikh Del, aka the terrifying Soviet police organization responsible for quieting political opposition and anti-Communist sentiment (through deportation, imprisonment, and execution) under Joseph Stalin’s rule. Lina’s family has been branded as fascist supporters and political enemies by the Soviets, and are given a few minutes to pack their most precious belongings before they are whisked away into the night to disappear from their home forever. Between Shades of Gray is Lina’s story as she, her mother, and her brother fight to stay together and to survive. Loaded into cattle cars and transported hundreds of miles to Siberia to serve hard labor in unimaginable conditions, then again to the Arctic Circle, Lina’s story is one of pain, endurance, and survival.

When I first heard about this book, I was captivated by the actual background of the novel – Ruta Sepetys is the daughter of Lithuanian emigrees, and Between Shades of Gray was inspired by Sepetys’ father, a refugee who escaped Lithuania as a young boy. With this debut novel, Sepetys endeavors to tell the story of the Baltic States – Lithuania, Latvia, and Estonia – that disappeared from maps in 1941 during Stalin’s occupation and cleansing of the region. Needless to say, this novel is a work that is clearly incredibly important to the author, and should be equally important to readers of all ages, as it gives voice to the Lithuanian experience in WWII under Stalin’s regime. While many have read about the atrocities committed against Jews during the Holocaust, fewer books are read – or written – about those committed by Stalin, especially in Lithuania and the other Baltic states.[1. A digression: Recently, I read Al Jaffee’s autobiography which tells the story of his experiences in Lithuania during WWII – a Jewish boy living in a shtetl in the far eastern city of Zarasai. His real-life experience – in which his mother took Al and his younger brother away from the safety of America and moved them back to Lithuania in 1941! – is markedly different than Lina’s, but I think an incredible one that absolutely should be read.] Between Shades of Gray is a powerful book that skillfully tells this story and accomplishes what Ms. Sepetys set out to do. It tells the familiar story of heartache, atrocity, and death (i.e. arrested in the middle of the night, cattle cars, labor camps, disease, starvation, and death), but from the Lithuanian/Soviet perspective (as opposed to the Jewish/Nazi perspective).

From a writing and character point of view, Between Shades of Gray does a solid job delivering as a work of historical fiction. Told from Lina’s first person perspective, we watch and experience everything that unfolds through eyes. To that end, much of the novel hinges on Lina’s development as a character and the strength of her narration – and both elements, I’m happy to say, are executed beautifully. Lina is a heroine that is both relatable and strong, and grows from ignorantly headstrong to the one person that can keep her family together as the months and years unfold. I also love the thread of art that runs throughout the book, and Lina’s skill as an artist, her love for the works of Munch, and the hope she imbues in her sketches – to leave clues for her father, yes, but also to tell the story of her family and other Lithuanians as they are systematically deported and disappear. Other characters, particularly Lina’s beautiful and educated mother, are given similar depth and heft, and make Between Shades of Gray a much more rounded, powerful read.

These praises said, the writing level for this novel was not without its flaws. There was some degree of repetition (especially with certain images and phrases), and from a stylistic standpoint, I’m not sure of the effectiveness or usefulness of Lina’s italicized “flashbacks” that end each chapter. Some of these are important to certain plot points, but many more provide no real relevance to the story, Lina, or her past, resulting in a disjointed reading experience. Also, the novel’s ending is extremely abrupt, in the form of a jarring epilogue that doesn’t give nearly enough emotional payoff for so grueling a tale. And this, in turn ties into my final note about the novel:

While Between Shades of Gray is a powerful and important story, Sepetys’ debut novel lacks the skill with words and raw emotional resonance that would make it truly, hauntingly unforgettable. Lina’s narrative is simple and direct, emotions layered on one two-dimensional plane without deeper nuance or gravitas. Sepetys’ novel isn’t the horrific experience of Elie Wiesel’s Night, or the eye-opening terror of The Rape of Nanking. Nor does it share the storytelling ability of Zusak’s The Book Thief, Wein’s Code Name Verity, or Yolen’s The Devil’s Arithmetic. This doesn’t mean that Between Shades of Gray is any less of an important book – just that, as a work of WWII historical fiction, it doesn’t quite transcend good to great.

They took me in my nightgown.

Thinking back, the signs were there – family photos burned in the fireplace, Mother sewing her best silver and jewelry into the lining of her coat late at night, and Papa not returning from work. My younger brother, Jonas, was asking questions. I asked questions, too, but perhaps I refused to acknowledge the signs. Only later did I realize that Mother and Father intended we escape. We did not escape.