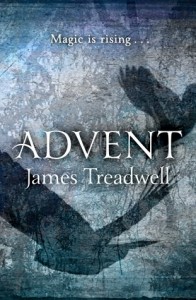 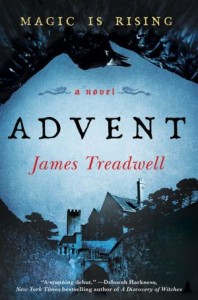 A drowning, a magician’s curse, and a centuries-old secret. “1537. A man hurries through city streets in a gathering snowstorm, clutching a box in one hand. He is Johann Faust, the greatest magician of his age. The box he carries contains a mirror safeguarding a portion of his soul and a small ring containing all the magic in the world. Together, they comprise something unimaginably dangerous.

London, the present day. Fifteen-year-old Gavin Stokes is boarding a train to the countryside to live with his aunt. His school and his parents can’t cope with him and the things he sees, things they tell him don’t really exist. At Pendurra, Gavin finds people who are like him, who see things too. They all make the same strange claim: magic exists, it’s leaking back into our world, and it’s bringing something terrible with it.

First in an astonishingly imaginative fantasy trilogy, “Advent “describes how magic was lost to humanity, and how a fifteen-year-old boy discovers that its return is his inheritance. It begins in a world recognizably our own, and ends an extraordinarily long way from where it started–somewhere much bigger, stranger, and richer.

How did we get this book: Bought & Review Copy from the Publisher (US)

Why did we read this book: Thea was the first one to post about it on her radar a few months ago and Ana was immediately taken with an urge to read it ASAP. Naturally, we decided on a joint review.

England, 1537. Johann Faust, the greatest magician of his age hurries to board the ship that will take him to new shores. He carries with him a box which contains a mirror safeguarding part of his soul and a small ring that holds all the magic on the world. Tragically, the ship sinks and magic disappears from the world.

England, present day. Fifteen-year-old Gavin Stokes is about to embark on a journey which will change his life forever. He is to spend the week with his aunt in Cornwall, where he hopes he can just relax and be himself for a few days. Because Gavin has a secret: he sees things that are not supposed to exist – or so he has been told his entire life. Gavin arrives at his aunt’s house but she is not there to greet him. Instead, he meets people and witness events that tell him that the impossible do exist and that all his life he has been lied to.

The story alternate between the two storylines – the first receding in time all the way back to when Faust’s actions set everything in motion; the latter progressing toward the inevitable moment in which the characters will feel the consequences of those actions.

In terms of plot, the whole thing about the ring is slightly well, familiar. When I was trying to summarise the plot above I actually wrote down the following as a joke: “the One Ring then disappears from history until the time comes for it to resurface and be joined with its master”. Except this is not a joke at all and is in fact, what happens in the novel. That said, I actually did love the clever way that the author mixed the tale of Faust with the story of the prophetess Cassandra of Troy.

And Advent starts really well in as an almost old-fashioned tale of Horror. Gavin’s first hours into his journey when he sees the ghostly presence of Mrs Grey (the lady who has appeared to him since he was a small boy and has been a constant companion and an almost-friend all his life) in the train, his arrival at his aunt’s empty house and the ensuing hours of abject fear were thrilling, scary and truly intriguing.

Unfortunately, Advent soon starts to show its two biggest problems: the sluggish pace (nothing really happens in the first couple hundred pages) and the frustrating way in which its main storyline is unravelled – and the former is most definitely exacerbated by the latter. This is a story build around mysteries: who is Gavin? Where is his aunt? What is happening to the world? Who is Mrs Grey? EVERYBODY but Gavin seems to know more than what they tell him – and the book is populated with a bunch of characters that are somewhat involved in this mystery. The problem for me is how the story not only unravels around half-truths but also via cryptic half conversations and even half-sentences that are contrived and forced. Frustrating doesn’t even start to cover it.

This becomes truly and well aggravating when around chapter 21, all of a sudden we have a whole chapter which is an immense expository chapter containing back-story which basically tells point blank everything about most of the mysterious characters.

Toward the end I was skimming through hoping it would all be finished soon. Ultimately, Advent and I simply did not click and I nearly put the book down several times.

Oh my god, this book was SO BORING.

That is my first reaction and coherent thought when attempting to write about the novel. Maybe it’s unfair to begin a review this way. Let me start with the good:

Advent tells the parallel stories of the World’s Greatest Magus in the early sixteenth century (who has, apparently, created the One Ring); meanwhile, hundreds of years in the future, Advent also chronicles the adventures of a teenage boy named Gavin, who has always been different.

To Ana’s point, Advent starts off with incredible promise – I loved the early chapters, as we learn about Gavin and his own peculiar abilities, the ever-present figure of Mrs. Gray, and his sojourn to Pendurra. From a macro-perspective, the storyline for Advent is quite good (if familiar). We have a lonely young man with peculiar abilities, a precocious yet innocent young girl with similar abilities, an older woman that has just been canned from her job who can hear things that no one else can…and of course, we have the story in the background of the Greatest Magician of All Time and his hubris. Tensions build and strange things happen, all leading to an ultimate conflict.

Unfortunately, on a reading level, Advent is hardly so entertaining. The pacing is painfully uneven, the prose plodding and unsatisfactory, the level of character development dramatically hampered by the level of repetition. The early chapters are fantastic – and as Ana says, you really get a feel for Gavin and how utterly alone he is, and the terror he can and does experience. That said, the exposition goes on and on and on, and nothing much happens (or it happens excruciatingly slowly) after Gavin’s first night at Pendurra. The conversations between characters are repeated ad nauseam with no actual purpose; the interstitial chapters involving the Greatest!Magician!EVER! (as he reminds us – every, freaking, chapter) are more of the same.

I will never understand this “literary fantasty” which basically equates to sucking all the life out of genre fiction and making it as dull, soulless, and repetitive as possible.

Needless to say, Advent did not work for me. Once the glow of the early chapters waned, I could not bring myself to finish the book.

Notable Quotes/Parts: You can read an excerpt of Advent online HERE.

Reading Next: A Face Like Glass by Frances Hardinge