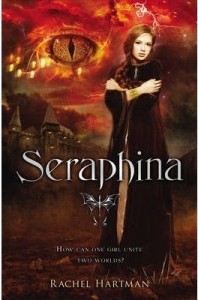 Four decades of peace have done little to ease the mistrust between humans and dragons in the kingdom of Goredd. Folding themselves into human shape, dragons attend court as ambassadors, and lend their rational, mathematical minds to universities as scholars and teachers. As the treaty’s anniversary draws near, however, tensions are high.

Seraphina Dombegh has reason to fear both sides. An unusually gifted musician, she joins the court just as a member of the royal family is murdered—in suspiciously draconian fashion. Seraphina is drawn into the investigation, partnering with the captain of the Queen’s Guard, the dangerously perceptive Prince Lucian Kiggs. While they begin to uncover hints of a sinister plot to destroy the peace, Seraphina struggles to protect her own secret, the secret behind her musical gift, one so terrible that its discovery could mean her very life.

In her exquisitely written fantasy debut, Rachel Hartman creates a rich, complex, and utterly original world. Seraphina’s tortuous journey to self-acceptance is one readers will remember long after they’ve turned the final page.

How did I get this book: e-ARC from the publisher (via NetGalley)

Why did I read this book: Firstly, the US cover caught my eye because it is gorgeous and different and so very appealing (the UK cover…not so much). Then, I read the blurb and immediately wanted the book VERY BADLY. Finally, I saw the stellar reviews start to roll in – not just from the likes of Tamora Pierce and Naomi Novik, but from some trusted bloggers. Naturally, I was completely and utterly SOLD on Seraphina – and when the publisher contacted us about coverage, you bet I sent back a very excited, exclamation-pointy email.

From the moment that Seraphina was born and made her way, screaming, into the world, she immediately knew that she was different. Able to recall her birth and time as a baby, Seraphina grows up to a precocious young girl, infuriatingly hidden away by her overprotective father. Of all her father’s rules, one rankles most of all – Seraphina is forbidden from playing music. After she discovers her mother’s flute and teaches herself to play it, with the goal of shaming her father into assenting to giving her music lessons, her father is enraged, and terrified. The exchange leads Seraphina to discover one of the most desperately hidden secrets and truths of her young life – and her life from that point onward will never be the same.

As a result of that earthshaking night, Seraphina is allowed her music if nothing else, and apprentices under Orma, a saarantas dragon in human form. As her skill grows, so too does her reputation, and soon Seraphina becomes the apprentice of the finest musician in the kingdom and tutor to the crown princess herself. Attention, however, for someone in Seraphina’s position comes at a terrible risk, and soon she finds herself embroiled in the ever-increasing tensions between the dragons and humans of the Southlands. When a beloved monarch, Prince Rufus, is killed by means that look very much like a dragon attack, the truce between the two species is strained to its limits – unrest from anti-draconian factions and religious brotherhoods take to the streets, while the dragons themselves survey the fraying political situation with disdain.

At the heart of this powder keg, Seraphina struggles to calm tensions and encourage understanding. Working to uncover the truth of Prince Rufus’ murder with Prince Lucian Kiggs, bastard heir and captain of the guard, Seraphina also struggles with her own abilities and heritage, which threaten to overcome her and reveal her deepest, most guarded secret.

It is very hard to write this review without spoiling anything, so I apologize if anything here is slightly misleading – it would be a shame to spoil any of the developments and turns the story takes along the way. What I can tell you, dear readers, is that Seraphina is a beautiful, majestic creature of a novel in style and in substance – so much so, that it is hard to believe that this wondrous book is Rachel Hartman’s debut novel. Dragon fantasy novels are a dime a dozen (though perhaps not so much en vogue as they once were in earlier decades), but Hartman takes what could have been a very tired magical creature novel and weaves a complex world rife with inter-species tension and bigotry, a refreshingly unique and awesome sense of magical ability, and an ode to what it means to feel and be…well, not just human, but a sentient, respected living creature.

There’s a richness to every facet of this book, from character to world, but there are two superb aspects of the book to which I must draw your attention, dear readers:

First, there is the amazingly nuanced and genuine relationship between human and dragon that underscores the main conflict of Seraphina. I love that dragons are not treated as majestic beautiful shiny creatures in this book – they are both familiar and alien, cooly logical, precise, and uncaring of human sentiment (or are they?). The idea of dragons that can shift into human form is not an unfamiliar premise, but the behavior of these dragons and their reverence of knowledge and attitude towards humans is decidedly unique and beautifully constructed. As Seraphina makes the comparison to Princess Glisselda early in the novel, to dragons, humans are not too different than cockroaches – reproducing quickly, stubborn to kill, scattering and multiplying. But more than just cockroaches, humans are interesting, and their ability to create art and their messy emotions are what fascinate and seal the peace between the two species. The tensions that follow this uneasy truce are wholly believable, and I love the careful, nuanced way that the story develops this storm and feeling of mistrust on both sides of the treaty.

The second outstanding aspect of the novel, and most important to me, is the character of Seraphina herself. People, I LOVE SERAPHINA SO MUCH. Struggling to conceal the secret that would mean her immediate doom, walking the fine line between the world of dragons and humans, Seraphina is an enterprising, wonderful heroine for whom you cannot help but feel and cheer. She tries to keep herself separate from others, but yearns so much to end the lonliness that has characterized her entire life – in particular, her relationship with the dragon Orma is a wondrously complicated construct. Her relationships with other characters are fantastically done, too, from the impish Princess Glisselda to the cuttingly intelligent Prince Kiggs.

And I haven’t even touched on the richness of art, the melodic quality of the writing that sits so beautifully against the music that moves Seraphina so, the thread of creative joy that runs throughout the novel! Nor have I touched on the wonderful conceit of Seraphina’s emergent memories, gifts from her mother, and latent abilities that need tending in the form of a magical garden (and what this translates to in the real world). But therein lie spoilers, and I promised not to spoil.

Suffice it to say, there are many, many beautiful things about this novel. I loved Seraphina from cover to cover, and I dearly hope that fantasy lovers everywhere take heed and read this remarkable, wonderful debut. Seraphina is another lock for my favorite books of 2012, and I emphatically recommend it to all.

“He was going to kill you,” I said, my chin quivering. “I had to do something.”

I stepped forward and took him in my arms. He was exactly my height, which surprised me; my awe of him had made him seem taller. He emitted a whimper of protest, or maybe surprise, but wrapped his arms around me and buried his face in my hair, half weeping, half scolding me.

“Life is so short,” I said, not sure why I was saying it, not even sure if that was really true for someone like me.

We were still standing there, clinging to each other, our feet ice-cold in the snow, when Orma landed on the next hilltop, followed closely by Basind. Kiggs lifted his head and stared at them, big-eyed. My heart fell.

I’d told him I had no devices. I’d lied right to the prince’s face, and here was the proof: the dragon I’d called, and his dimwitted sidekick.

PLUS, you can read an exclusive prequel to Seraphina, titled “The Audition”, online HERE.

Additional Thoughts: Make sure to stop by on Monday, as we have author Rachel Hartman over for a guest post plus a chance to win a copy of Seraphina! Until then, we leave you with the official book trailer:

Rating: 8 – Truly Excellent, and leaning towards a 9

Reading Next: House of Shadows by Rachel Neumeier

Over at Kirkus: Paradox by A.J. Paquette