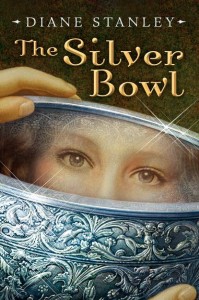 Unwanted at home, Molly goes to work for the king of Westria as a humble scullery maid. She arrives at the castle with no education, no manners, and a very disturbing secret: She sees visions, and those visions always come true.

One day, while she’s working in the king’s great hall, young Prince Alaric passes by. Molly finds him unbearably handsome—but also unbearably rude. But what does it really matter? She’ll probably never see him again.

In time Molly is promoted to polishing silver and is given a priceless royal treasure to work on: the king’s great ceremonial hand basin. But there’s something odd about it. The silver warms to her touch, a voice commands her to watch and listen, and then the visions appear. They tell the story of a dreaded curse that has stalked the royal family for years. There have already been deaths; soon there will be more.

As tragedy after tragedy strikes the royal family, Molly can’t help but wonder: Will the beautiful Alaric be next? Together with her friends Tobias and Winifred, Molly must protect the prince and destroy the curse. Could a less likely champion be found to save the kingdom of Westria?

Why did I read this book: So, this is actually a last minute switcheroo. I was supposed to read The Age of Miracles, but due to a netgalley mishap, I had to make a last minute change. Then, I spied this title on my TBR – a YA fantasy novel that had been quietly languishing for a year or so.

The youngest in a large, poor family, Molly has never been truly wanted by her father. It doesn’t help that she starts developing a strange ability – while playing tag with some of the local villagers, Molly has a vision of a neighbor dying tragically. A few days later, when that vision comes true, the entire village sees her as a witch and a curse – like her mother before her, who has been locked away from the world and called mad by Molly’s father, Molly has a rare gift of seeing the future. So, at the age of seven, when her family’s fortunes are at an all time low, her father finds the perfect reason to get rid of his unwanted child. Molly is hauled off to the castle where she is put to work as a scullery maid in the kitchens – hard, long labor that at first is a tough fit for the headstrong and very vocal Molly. As the years pass, though, she finds her place at the castle, making friends (especially with the so-called “Donkey Boy” Tobias and fellow maid Winifred), and eventually getting a position polishing silver outside of the kitchens.

Her new job, however, has her polishing a beautiful silver bowl…which immediately begins to show her terrifying visions of the past, and of the grim future that awaits the King. As it turns out, the royal family is cursed, and Molly alone has the ability to foresee – and change – the future.

When I started this book, I was looking for a diverting, adventure-filled YA fantasy read – and I am pleased to say The Silver Bowl did not disappoint. Reminiscent of middle grade/young adult fantasy novels Patricia C. Wrede, The Silver Bowl is a sweet adventurous tale with a wonderful, plucky heroine. In fact, though this book was published in 2011, it feels much more like one of the books I would have devoured and loved as a middle schooler – like Cimorene’s adventures in Searching for Dragons, or Harry’s adventures in The Blue Sword. The tone of the novel and its prose are beautifully rendered, and I love that Diane Stanley is not afraid to show the darker elements of the story (curses in the form of monsters, bloody battles and injury, to name a few) – but it is the elegant style in which the book is written that gives it the feel of a McKinley, or Wrede, or McKillip.

Of course, the true standout of the book is our heroine, young Molly and her singular ability to cut to the heart of any problem and take matters into her own hands. I love that she, unlike the usual heroines that seem so prevalent in today’s fantasy fiction for young adults, is charmingly ignorant and un-educated. Instead of being the peasant girl that has had the loving family that has, inexplicably, educated her far beyond the station of her time, Molly is refreshingly ignorant. She’s not polished. She’s not princess beautiful. She’s not literate. But that does not mean she isn’t brilliantly smart. Molly has gumption, beyond her station in life – and that is pretty freaking amazing. I also love that there is a romance angle to this story, and it’s not one that features the peasant girl becoming the prince’s bride.

From a story perspective, the underlying conflict of The Silver Bowl is somewhat simplistic (and somewhat predictable, once the villain is revealed), but that does not translate to a poorly told or boring story. Stanley’s writing style, the touching interchanges between her characters, the magical abilities and curses of this world – they are all fantastically done.

The Silver Bowl is a book that I would whole-heartedly recommend to anyone looking for a quick, nostalgic fantasy novel – and I will be checking out Diane Stanley’s backlist very, very soon.

I was sent away to work when I was very young. I suppose it was not surprising. Father was poor enough already, having failed in the tailoring trade, without the added burden of a mad wife and the seven children she’d borne him. He could not possibly feed so many.

Nor did he care for us overmuch, being rather more a surly than a sentimental man. He kept Tucker on to help in the cutting room, and Anne to run the house and look after Mother. But excepting Robbie, who quarreled with Father and ran away, the rest were hired out as servants as soon as they were old enough.

Being the youngest, and of no account, I think my very existence slipped Father’s mind much of the time. I was rarely at home except to gulp down some soup and curl up in the corner to sleep. Then I was off again in the mornings to run wild in the streets, where I played with the boys, and learned coarse words from them, and got into fights, and mussed my clothes, and cam home with dirt on my face.

Then, around my seventh summer, I came to Father’s attention. I’d been in particular trouble of late – and not for the first time, either. Of a sudden he was all on fire to be rid of me.

Reading Next: The Shadowed Sun by N.K. Jemisin