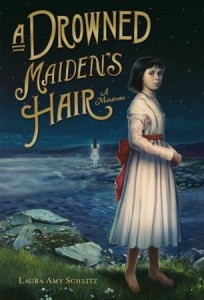 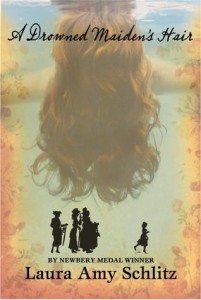 Maud Flynn is known at the orphanage for her impertinence, so when the charming Miss Hyacinth and her sister choose Maud to take home with them, the girl is as baffled as anyone. It seems the sisters need Maud to help stage elaborate séances for bereaved, wealthy patrons. As Maud is drawn deeper into the deception, playing her role as a “secret child,” she is torn between her need to please and her growing conscience — until a shocking betrayal makes clear just how heartless her so-called guardians are. Filled with tantalizing details of turn-of-the-century spiritualism and page-turning suspense, this lively historical novel features a winning heroine whom readers will not soon forget.

Why did I read this book: A few weeks ago, I came upon an upcoming book called Splendors and Glooms by Laura Amy Schlitz – a Dark Comedy/Gothic novel which sounds GREAT. I then started to have a look at the author’s backlist and when I saw the cover and the blurb for A Drowned Maiden’s Hair: A Melodrama
, I bought it immediately.

Little orphan Maud Flynn knows that she is most certainly NOT a good girl and she has been told so by many people. Plus her impertinence and her naughtiness have landed her in constant trouble at the orphanage where she lives. This is why, more than anybody else, Maud is surprised when a charming, rich old lady called Miss Hyacinth and her sisters decide to adopt her out of all the children in the orphanage. Given this opportunity to leave that horrid place and to have a better life, Maud vows to be a good girl – as much as a possible. Even if it means not questioning the sisters when they tell her she is to be a “secret child”, hidden from everybody else, never to leave the house. Why would she want to anyway, as she has everything she needs: beautiful new clothes, as many books as she can read, as much food as she wants and the lovely attention of Miss Hyacinth?

Happy to be wanted, enamoured with Miss Hyacinth and eager to please, she even agrees to help out (not that she has any real choice on the matter) the sisters in their Grand Scheme. Hyacinth, Judith and Victoria might look like perfectly upstanding ladies but are in fact, con women who hold fake séances, preying on grief-stricken wealthy patrons. Time passes and Maud gets to know her adopted family better – and realises that her new life is not as perfect as she would like it to be.

A Drowned Maiden’s Hair: A Melodrama is a brilliant example of how a very conventional Gothic story, with very traditional tropes can still be a damn good novel. This is an excellent Gothic melodrama, one that knows exactly that it is one and as such it plays to the strengths of the genre (the melodrama! the villainy! the atmosphere!) to the maximum even as it never deviates from a fairly predictable Gothic-inspired pattern. On the surface, there is nothing new about it: it features a Feisty Orphan, Dastardly Villains, Fake-Séances, and a perfect happy ending after a lot of drama and loads of ups and down.

In this particular case, I would say that what makes A Drowned Maiden’s Hair: A Melodrama a perfect case study of how using conventional tropes and sticking to the traditional of a genre is not a bad thing per, is how its characters are lovingly developed, especially Maud. Maud is so much more than a Feisty Orphan. She is feisty, yes and also stubborn, clever and impertinent but it is very clear that mostly, she is just a lonely girl who desperately needs to be loved. It is really interesting really, how Maud has internalised – after so many years of hearing abuse – the idea that she is not good and therefore she cannot possibly be loved. That being good in her mind is equated with prettiness (which she is not) and unquestioning behaviour is quite possibly one of the saddest things I have ever heard. Not being able to trust the adults in her life because they have always failed her, believing that she is indeed less valuable than other children because of that, makes for a really heartbreaking read. Another point of interest is how Maud is an avid reader and the vast majority of books she reads (most of them classics) serve only to reinforce this idea: every single child in those books is extremely beautiful and perfectly good.

Her story arc takes her through some serious heartbreak but also through a lot of growth, especially when it comes to developing not only her own sense of right and wrong but also of self-worth (her love cannot be bought by riches or superficial endearments and promises). There is also a beautiful relationship that develops between her and another character that is better left for the reader to discover. Suffice it to say that because of this relationship I have seen the best use for an Ouija Board ever.

The other characters are superbly developed as well: the three villains of the piece have different layers and motivations and their relationship with Maud develop in different ways. Although they are all very clearly demarked as villains (no black and white there) there is depth to them (which to me, makes them all the more horrifying).

A Drowned Maiden’s Hair: A Melodrama also presents an intricate study of child abuse: from obvious neglect and horrid experiences at the orphanage to that kind of abuse that is mostly psychological– what she undergoes with the sisters, who pretend to be kind and give only material attention to her whilst neglecting her thirst for love is just horridly insidious. Every time Maud wished for a hug and had to refrain herself was just gut-wrenching. That she goes through it all with verve and an unbroken spirit is just the cherry on top. Oh little Maud, let ME adopt you.

My review quite possibly makes it sound as though A Drowned Maiden’s Hair: A Melodrama is a dreary, dismally bleak read. It is not – quite the contrary. There are fun parts as well as really heart-warming ones. And I really don’t mean to sound melodramatic but the ending almost made me drown in my own tears of joy. True fact.

It was not until the Misses Hawthorne boarded the train that Maud was able to open her book. She had ridden in a train once before, when she left St. Anne’s Children’s Home for the Barbary Asylum, and she was glad of it, because it allowed her to assume the nonchalance of a world traveler. She sat down primly, back straight.

“You mustn’t read in the train,” said Judith Hawthorne. “You’ll be sick.”

Maud was sure she would not be sick. She opened her mouth to argue and then remembered that she had made up her mind to be perfectly good. She shut her book, folded her hands on top of it, and answered, “No, ma’am.”

“Miss Hyacinth has something to say to you,” continued Judith, and Maud, getting the hang of it, piped up, “Yes, ma’am.”

The two sisters looked at each other. After a moment, Hyacinth gave a little laugh. “Maudy, do you remember what you said earlier today – about how you would do whatever we asked of you?”

Maud had once slapped a little girl who tried to nickname her Maudy. She replied, “Yes, ma’am. I remember. I meant it, too,” she added generously.

“Good.” Hyacinth hesitated for a moment. “Do you like secrets, Maud?”
Maud thought about it. “I like to know secrets,” she said at last, “but I don’t like secrets that aren’t mine.”

Apparently this was not the answer Hyacinth had expected. She changed the subject. “Do you remember what I told you in the bookstore? That you wouldn’t be going to school right away?”

“Are you sorry for that? Do you mind very much?”

“That’s good.” Hyacinth lowered her voice mysteriously. “You see, Maud, Judith and I have a secret. If you were to go to school, that secret might come out. In a little while, once we are sure of you, we will tell you everything, but first we have to make sure we can trust you. Later on, we’ll ask you to help us with our work.”
Maud wrinkled her nose at that word work. Then she rallied. After all, even if she had to empty chamber pots, or peel potatoes, there would be fewer chamber pots and fewer potatoes than were required for sixty-three little girls. “I’ll help you,” she promised. “At the Asylum . . . well, sometimes I didn’t do exactly what I was supposed to, but that was because Miss Kitteridge was so mean.”

Hyacinth seemed to follow her thoughts. “I don’t mean that kind of work. You won’t have many chores to do, because we have a hired girl. Our work is different. It isn’t hard, but it’s secret. And – just at first – you, too, must be a secret. You’re going to be our secret child.”

Reading Next: When the Mountain Meets the Moon by Grace Lin