We are thrilled to present yet another Smugglerific cover reveal! This time, the book is Stormdancer from debut author Jay Kristoff. We cannot wait for the book – a dystopia set in a Japanese-inspired steampunk empire in which technology has decimated the environment, and a girl named Yukiko (who can telepathically communicate with animals) must hunting down the last thunder tiger left alive. How could we refuse something like that?! (Not to mention the blurb from Patrick freakin’ Rothfuss. Now that is an endorsement.)

Without further ado, BEHOLD! The cover of Stormdancer! 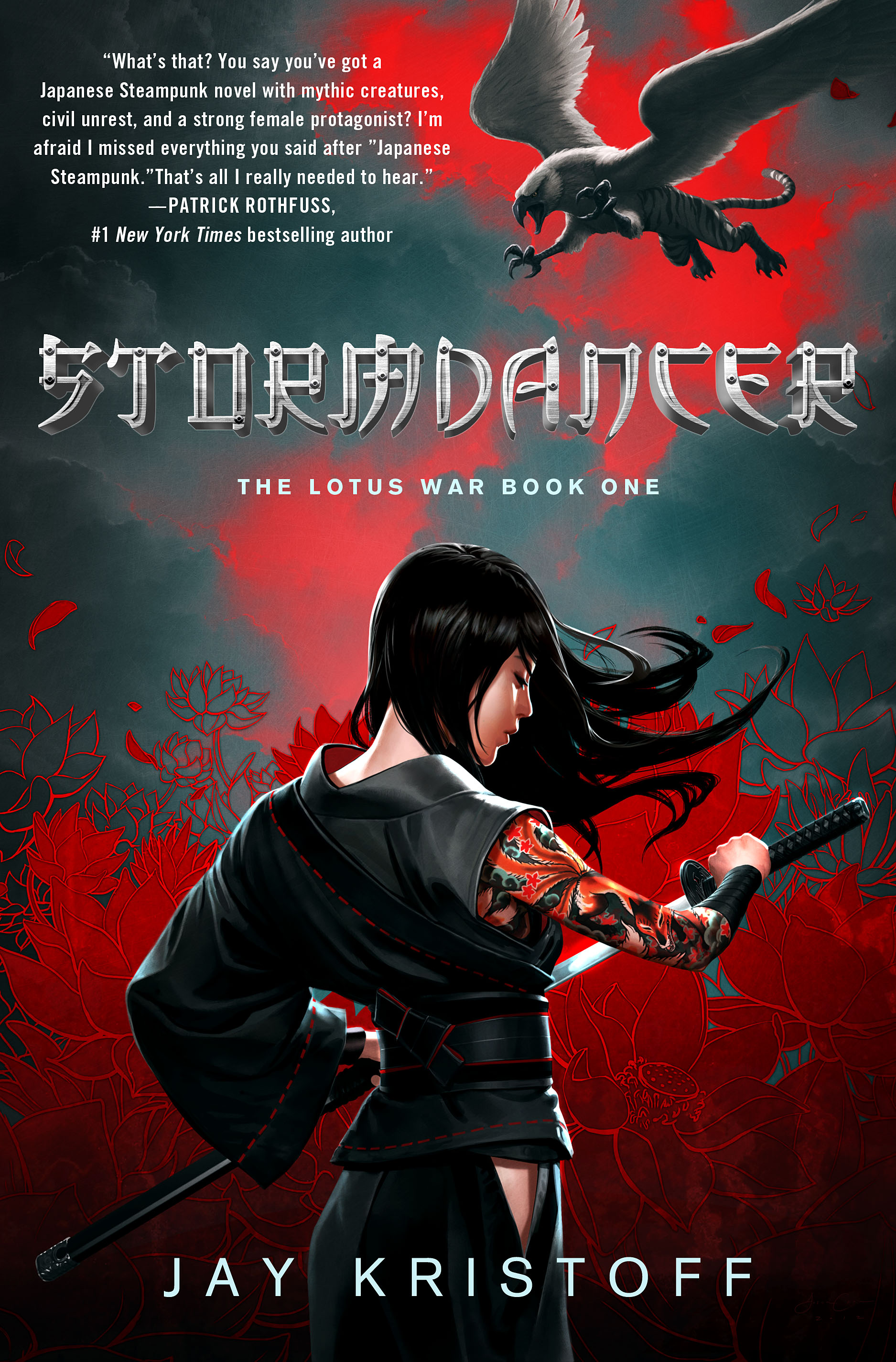 A DYING LAND
The Shima Imperium verges on the brink of environmental collapse; decimated by clockwork industrialization and the machine-worshipers of the Lotus Guild. The skies are red as blood, land choked with toxic pollution, wildlife ravaged by mass extinctions.

AN IMPOSSIBLE QUEST
The hunters of Shima’s imperial court are charged by their Shogun to capture a thunder tiger – a legendary beast, half-eagle, half-tiger. But any fool knows thunder tigers have been extinct for more than a century, and the price of failing the Shogun is death.

A SIXTEEN YEAR OLD GIRL
Yukiko is a child of the Fox clan, possessed of a hidden gift that would see her executed by the Lotus Guild. Accompanying her father on the Shogun’s hunt, she finds herself stranded: a young woman alone in Shima’s last wilderness, with only a furious, crippled thunder tiger for company. Even though she can hear his thoughts, even though she saved his life, all she knows for certain is he’d rather see her dead than help her.

But together, the pair will form an indomitable friendship, and rise to challenge the might of an empire.

Stormdancer is released September 18 in the US through Thomas Dunne books/St Martin’s Press.

For more about Stormdancer check out the book’s official Goodreads Page, or follow Jay on his blog and on twitter.

A Word From Jay Kristoff on The Cover:

Welcome to the cover reveal for my novel STORMDANCER. I know I’m totally biased, but holy frack, I love it. If I could write sonnets, I’d totally be busting one out right now, but thinking about it, I don’t even think I know what a sonnet is. *checks wiki*. yeah, I definitely can’t write one of those.

Three cool factoids about the cover:

Yukiko’s tattoo – The nine-tailed fox running down her arm is named “Kitsune”, and he’s the spirit guardian of the Fox clan. People in Shima pray to him for good luck. Tattoos in Shima say a lot about a person – their clan, their job, their social standing. You are not expected to get your own STORMDANCER tattoo, even if you really like the book. 🙂

The flower background – The flowers behind Yukiko are called “blood lotus”. They play a very important part in the world of STORMDANCER. I won’t tell you what they do, because that would be spoiling things and I’m not that much of a jerk. But I’m really glad they got included.

The little triangle in Yukiko’s pants that shows her bare skin – I dunno why this is there. I think it makes her more aerodynamic?

We have an ARC of Stormdancer up for grabs! The contest is open to all and will run until Saturday May 26 at 11:59pm (EST). To enter, use the widget below!

Jay is also running a Stormdancer Uber Giveaway on his own blog. For a chance to win another ARC and some other Stormdancer-y goodness, click here for details. Our question for the Uber Giveaway is: When is Stormdancer released in the US? (Hint, the answer is at the top of this post) Good luck!