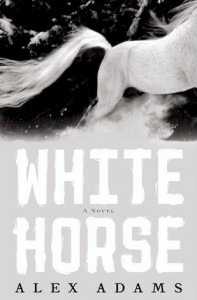 Thirty-year-old Zoe leads an ordinary life until the end of the world arrives. She is cleaning cages and floors at Pope Pharmaceuticals when the President of the United States announces that human beings are no longer a viable species. When Zoe realizes that everyone she loves is disappearing, she starts running. Scared and alone in a shockingly changed world, she embarks on a remarkable journey of survival and redemption. Along the way, Zoe comes to see that humans are not defined by their genetic code, but rather by their actions and choices. White Horse offers hope for a broken world, where love can lead to the most unexpected places.

Stand alone or series: Book 1 in a planned trilogy (though, ostensibly, could be read as a standalone novel)

How did I get this book: ARC from the US Publisher

Why did I read this book: Pitched as a cross between Cormac McCarthy’s The Road and Suzanne Collins’ The Hunger Games, White Horse basically had me at first glance. I love the cover, the title, and the blurb – featuring a 30 year old heroine and the end of the world – sounded right up my alley.

Zoe Marshall wakes up one day and discovers that a strange jar (actually more of a classical pot) is in her apartment. The jar is the color of scorched cream and fills Zoe with a sense of dread. She does not touch it. She does not open it. Instead, she leaves it where it is and goes to therapy, for fear that she is hallucinating or losing her mind.

By day, thirty year old Zoe Marshall is a janitor, a cleaning woman that is content with her simple job mopping floors and cleaning rat cages at Pope Pharmaceuticals. The job is to make money until she can go back to college one day, and in the meantime it’s rewarding enough – as Zoe says when asked, the job is gratifying. Things are dirty, and she makes them clean.

After the jar appears in her apartment, Zoe notices that things are starting to change. People are getting sick – throwing up violently for weeks before their bodies begin to change, mutating into something no longer human. The majority of humankind is killed by this mysterious disease, dying as their bodies reject the mutation.

“White Horse” ravages the planet, decimating almost everything in its path, leaving only three groups of people. There are those who have died.

There are those few survivors, like Zoe, who inexplicably seem immune to White Horse in its deadly traipse around the globe.

And finally, there are those who have contracted the disease, but do not die. These men and women’s bodies adapt to the mutation and change into something horrifying, unknown, and post-human; nightmares with snakes for hair, bodies that meld to the ground, spines that elongate with tails, necks that grow gills, monsters that crave live, twitching, warm flesh.

The world ends, and Zoe is one of the few left alive in a world where humans have become obsolete, and monsters roam. On a desperate, solo mission to a remote location in Greece, Zoe crosses the globe to find someone, to stay human, and to keep hope alive.

Alex Adams’ debut novel, White Horse is preceded by a pretty significant amount of hype – comparisons to McCarthy and Collins are not to be doled out lightly, for fear that the book will fall short of the hype machine’s frequent tendency towards hyperbole. In the case of White Horse, the hype machine is at least half-right, and Ms. Adams’ novel certainly shares many aspects with The Road, including a harrowing journey story across a devastated world in which brutality rules. In truth, White Horse is also similar to another apocalyptic novel that released this year: Julianna Baggott’s Pure. In Ms. Baggott’s novel, the world ended in a bang with Detonations that fused humans to things closest to them, and in White Horse, we see mutations ravaging mankind in much of the same way.

The other half of the comparison, to the ubiquitous The Hunger Games however, is completely baseless. Make no mistake, while White Horse will certainly appeal to readers of apocalyptic fiction and horror regardless of age, a crossover novel it certainly isn’t. This is in no way shape or form anything even remotely resembling The Hunger Games – and that is not a bad thing

White Horse is a beautifully executed novel that does not need the mega-blockbuster sales handle; on its own, Ms. Adams’ first in a trilogy stands strong. I love the actual structure of the book, as it flips between THEN and NOW, building tension and relaying Zoe’s tale in two parallel storylines. There are wonderful, shocking reveals throughout, and I like that sense of blurry haze coming into crystalline focus as Zoe’s past and present converge. Ms. Adams also has a distinctive writing style, which can be interpreted as grating or brilliant – you take your pick. Metaphors and similes abound, cadence is clipped and unpredictable, and ultimately the reading experience of White Horse is…unpredictable. Meandering. Odd. For example:

That the lie rolls off my tongue without tripping over my teeth is a miracle.

Somewhere in between then and now, geology went crazy and drove the weather to schizophrenia.

This is not the country where gleeful tourists toss coins into the Trevi Fountain, nor do people flock to the Holy See anymore. Oh, at first they rushed in like sickle cells forced through a vein, thick, clotted masses aboard trains and planes, toting their life savings, willing to give it all to the church for a shot at salvation. Now their corpses litter the streets of Vatican City and spill into Rome.

My natural inclination is to rebel violently against this type of prose, but I cannot deny that Ms. Adams’s style is memorable. I might not love the writing, but I can appreciate its execution and ultimately it kept me reading. That’s saying something.[1. On a completely nitpicky note, I really hated the reference to the item in Zoe’s apartment as a “jar”. I know. It’s a not-so-thinly-veiled allusion to Pandora’s box (which we know is actually Pandora’s jar). But in our modern vernacular, this “jar” would be referred to as a vase or a pot, and “jar” equates to jam jar in my mind. I digress, and maybe I’m the only one that feels strongly about this, but when Zoe continually refers to the “jar” that fills her with fear, I kept imagining a mason jar of Smucker’s in the middle of her living room.]

The other compelling, thought-provoking part of the novel is the examination of female characters – though again, one’s mileage may vary. Ms. Adams’ portrayal of women can be interpreted as either quietly subversive, or demeaning. I’d like to think it’s the former, as Zoe is an incredibly strong character, vested in preserving what vestiges of humanity remain, and hers is a tale of hope in an ugly world. There are other characters, however, that don’t fare nearly as well and I’m not sure how I feel about these different archetypes. There’s a young blind girl, raped by those closest to her and then eager to please and be accepted in any twisted facsimile of love. There’s the kindhearted, matronly Irina, who is introduced into the plot solely to save Zoe when she needs saving.

And then, there’s The Swiss. One of the major twists at the end is crazy ridiculous, when we learn what is motivating this particular bogeyman of a character. I don’t want to delve into spoilers, but I have a hard time swallowing The Swiss’s descent into madness and the cause for his sadistic cruelty and misogyny.

This said, I did love that Zoe’s story ends with hope and love, as opposed to the cruel brutality that characterizes most of the rest of the narrative.[2. On another nitpicky note, that last line of the ARC is ridiculously cheesy. It’s a personal pet peeve, and I know it won’t bother everyone – but to me a bad last line can be infuriating. Also see 500 Days of Summer.] I was under the impression upon starting this book that White Horse was a standalone novel, but apparently book 1 in a trilogy. For all its particular quirks and things that rubbed me the wrong way, there’s something undeniably compelling and magnetic about this story, and I am eager to see what happens nest.

Look at me: I don’t want my therapist to think I’m crazy. That the lie rolls off my tongue without tripping over my teeth is a miracle.

“I dreamed of the jar last night.”

The leather squeaks beneath my head when I nod.

There’s a scratching as he pushes his pen across the paper.

We’ve done this a half dozen times, Dr. Nick Rose and I. My answer never changes, and yet I indulge him when he asks. Or maybe he indulges me. Me because I’m haunted by the jar, him because he has a boat to buy.

The couch cushions crease under me as I lean back and drink him in the way one drinks that first cup of coffee in the mornings. Small, savoring sips. He fills the comfortably worn leather chair. His body has buffed it to a gentle gleam that is soothing to the eye. His large hands are worn from work that doesn’t take place in this office. The too-short hair, easy to maintain. His eyes are dark like mine. His hair, too.

There’s a scar on his scalp his gaze can’t possibly reach in the mirror, and I wonder if his fingers dance over it when he’s alone or if he’s even aware of its presence. His skin is tan; indoors is not his default. But where to put him? Maybe not a boat. Maybe a motorcycle. The idea of him straddling a motorcycle makes me smile on the inside. I keep it hidden there. If I let it creep to my lips, he’ll ask about that. And while I tell him all my thoughts, I don’t always share my secrets.

“Scorched cream. If it were a paint color, that’s what they’d call it.

It’s like . . . it was made for me. When I reach out in the dream, there’s a perfectness to the angle of my arms as I try to grasp the handles. Did you ever have the one kid in school whose ears stuck out like this?” I sit straight, tuck my hair behind my ears, shove them forward at painful right angles.

His mouth twitches. He wants to smile. I can see the debate: Is it professional to laugh? Will she read it as sexual harassment? Laugh, I want to tell him. Please.

“No.” His smile breaks free, and for a moment I forget the jar. It’s neither huge nor perfect, but he made it for me. I find myself filled with a million questions, each designed to probe him the way he searches me.

“Do you have a recurring dream?” I ask.

The smile melts away. “I don’t remember them. But we’re talking about you.”

Right. Don’t throw me a bone. “The jar, the jar. What else to tell you about the jar?”

“Are there any markings?”

I don’t need to stop and think; I know. “No. It’s pristine.” My shoulders ache with tension. “That’s all.”

“How does it make you feel?”

“Terrified.” I lean forward, elbows pressing a dent into my knees. “And curious.”

Reading Next: Enchanted by Alethea Kontiss