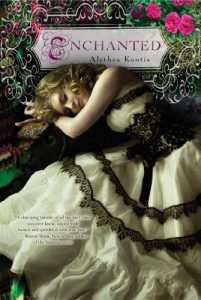 It isn’t easy being the rather overlooked and unhappy youngest sibling to sisters named for the other six days of the week. Sunday’s only comfort is writing stories, although what she writes has a terrible tendency to come true.

When Sunday meets an enchanted frog who asks about her stories, the two become friends. Soon that friendship deepens into something magical. One night Sunday kisses her frog goodbye and leaves, not realizing that her love has transformed him back into Rumbold, the crown prince of Arilland—and a man Sunday’s family despises.

The prince returns to his castle, intent on making Sunday fall in love with him as the man he is, not the frog he was. But Sunday is not so easy to woo. How can she feel such a strange, strong attraction for this prince she barely knows? And what twisted secrets lie hidden in his past – and hers?

Stand alone or series: Can be read as a standalone book, but I hope it is the start of a series!

How did I get this book: ARC from the Author

Why did I read this book: I was drawn in by two irresistible hooks: 1. The notion that Enchanted is a retelling of The Frog Prince (I have a thing for frogs); and 2. COVER BLURB from SHARON SHINN. Obviously I was completely, utterly, head-over-heels sold. We were THRILLED when Alethea (by way of the awesome and lovely Jackie Kessler) asked if we’d like to feature her book for its release.

Sunday Woodcutter is doubly-blessed – not only was she born on the Sabbath Day (and *doomed* to be bonny and blithe and good and gay), but she’s also a seventh-born daughter. While she might not be as beautiful as her eldest sister Monday, or as daring as her sister Thursday, Sunday is a beautiful, kindhearted girl with magic in her veins. Anything she writes on paper inexplicably comes to fruition, albeit not in the way she has intended. (For example, when she fervently wrote about her desire to stay home from an undesirable task, she was granted her wish – in the form of an illness that kept her home for a week)

One lazy afternoon, Sunday escapes from the monotony of her chores and sneaks out to her beloved woods where she meets an enchanted frog, named Grumble, who becomes her new best friend. With Grumble, Sunday can be herself. She can read her stories about her family, share her fears and hopes and dreams, and before she knows it, she has fallen in love with her man-trapped-in-a-frog and gives him a kiss.

The morning after being kissed, Grumble awakens in his true form – in truth, he is the heir to the realm, Prince Rumbolt – and while he has a hard time remembering the events leading up to his cursed transformation, he has no problem remembering his beloved Sunday with her sweet face and beautiful stories. He also remembers enough of his past life to know that he has fallen in love with the only girl in the kingdom that will despise him when she learns his true identity, for Sunday’s eldest brother, Jack Woodcutter, was an idolized guard in the king’s palace but fell from grace and was killed, all because of Rumboldt (or so everyone believes). In order to woo his love in his true form, Prince Rumboldt makes his way home and decides to throw a three-night ball inviting ALL the eligible ladies in the realm, hoping to catch Sunday’s eye and earn her heart, again, as his true self.

Things are not so simple for a Prince and his unrequited love, however. As Rumbolt returns home, glimpses of his shadowed, forgotten past return to haunt him, and when the ball begins, his quest to win Sunday’s heart leads to incredibly danger. Rumboldt’s father – the eternally youthful King whose true name has been forgotten – has dark secrets, not only encompassing Rumboldt’s mother and her mysterious death, but stretching back so many prior generations of beautiful young brides. With the help of his beloved sorceress, the amethyst-eyed enchantress named Sorrow, the King has somehow managed to stay young, vibrant, and in power for many years. At Rumboldt’s ball, the King also sets his gaze on a new bride – Sunday’s elder sister, Wednesday. As the danger facing the Woodcutter family reaches a feverish pitch, the truth of Rumboldt’s enchantment and the familial ties of magic and betrayal between the Woodcutters and their fey roots all must come to light.

And, with such danger afoot, our starcrossed lovers Rumboldt and Sunday must also conquer the challenges stacked between them if they are ever to find their own happily ever after.

Enchanted is Alethea Kontis’s first novel (but not her first book), and it is a delightful, airy fable, chock-full of fairy-tale twists and allusions. While the book is billed as a retelling of the Frog Prince, in truth, Enchanted is so much more than that – it borrows from so many beloved fairy tales, from Snow White, to Cinderella, to Jack and the Beanstalk, to Bluebeard. I absolutely adored this aspect of the novel and the clever integration of all of these different, darker and slightly twisted fairy tales into the overall arc of Enchanted. While the book’s initial impetus is the bond between a girl and a frog, that story is such a small part of the overall tale, which in truth spans generations and deep family secrets, and I love that completely unexpected depth. There are divisions between sisters, broken hearted parents and the relationship between a mother and her daughters, the complications of magic and the ever-present fey…there is a LOT of fodder for future novels in this single, slim volume. (On that note, PLEASE PRETTY PLEASE say that this is the first novel in a sprawling series, Alethea Kontis! Ahem. I digress.)

So far as the actual characters are concerned, I fell in love with Grumble the frog and Rumboldt the young man from almost first glance. While spend time in both his and Sunday’s minds, to me Rumboldt is the true hero of this book. His narrative is sweet and compelling, and I love his earnestness and (at times comic) devotion to Sunday. As Rumboldt struggles to woo the girl who he believes must hate him because of his role in her brother’s death, he also struggles to recall the fleeting memories of the years and days leading up to his enchantment as a frog, and you can’t help but root for this gangly, slightly awkward but incredibly lovable prince the whole way.

As for Sunday herself, however, my feelings are less warm and fuzzy. I have to admit, I didn’t much care for our dear Sunday – she’s fair, bonny and gay, and ultimately this means she’s so saccharinely sweet that she’s nowhere near as interesting as Rumboldt or her less-blessed other sisters! Sunday is a beautiful girl that gets to wear beautiful dresses, but she’s lacking the fire of her Pirate Queen sister Thursday, or the grit of her hard-working sister Saturday. Also, this is also very much a pretty princess book – not that there’s anything wrong with that! But it is a book about beautiful people dressing up in beautiful clothes and going to glamorous balls, and that sort of traditional, old school fairy tale. (This is fine, but in small doses – it’s so much more fun when people aren’t stunningly gorgeous and have to rely on other sorts of strengths and weaknesses to succeed.)

This said, I think there’s so much potential for future adventures. Saturday, in particular, seems to have a tale to be told – but we shall see!

Additional Thoughts: Make sure to stop by and check out Alethea’s guest post today about her inspirations and influences!

Reading Next: The Vicious Deep by Zoraida Córdova