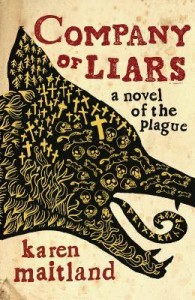 The year is 1348. The Black Plague grips the country. In a world ruled by faith and fear, nine desperate strangers, brought together by chance, attempt to outrun the certain death that is running inexorably toward them.

Each member of this motley company has a story to tell. From Camelot, the relic-seller who will become the group’s leader, to Cygnus, the one-armed storyteller . . . from the strange, silent child called Narigorm to a painter and his pregnant wife, each has a secret. None is what they seem. And one among them conceals the darkest secret of all—propelling these liars to a destiny they never saw coming.

Why did I read this book: A few weeks ago, I heard about Karen Maitland’s upcoming release The Falcons of Fire and Ice which is set in Portugal and Iceland – and I thought to myself, this book sounds (and looks) awesome. So, I looked it up and saw her previous books, and remembered being vaguely curious about them before. Since I was in the mood to read historical/medieval stories over my recent holidays, I got Company of Liars to try it out.

Company of Liars is that sort of read that proves difficult to review. I loved it as I read it t the point where as soon as I finished it, I bought two more of this author’s books. But things went downhill once I sat down to review it. Looking back, Company of Liars has, I believe, many problems. I am conflicted about it.

England, 1348 – the Plague is spreading around the country and nine strangers are trying to outrun it. All of them have secrets to keep and a lot to lose. Amongst them, Camelot, a relic-seller that trades in hope and the person who narrates the story; Cygnus, a storyteller who believes his own tales; Osmond, a failed painter and his very pregnant wife Adela and Narigorm, a strange albino girl who reads Runes and foretells darkness. They travel together, for there is safety in numbers, but as they walk across England, their past catch up with each one of them. When fear, despair and eventually death start to befall them, the group realises that there might be worse things than the Plague.

First things first: Company of Liars has been described as “a dazzling reinterpretation of Chaucer’s Canterbury Tales”. I personally think this is a gross misrepresentation of Company of Liars as there is very little to connect both works beyond their Medieval setting. Sure, some of the characters (though not all of them) tell their story but each storytelling takes only but a few paragraphs of the 576 pages of this book and most importantly for me, the narrative is not structured around the act of story-telling (if I were to compare Company of Liars to any other book, it would be to Agatha Christie’s And Then There Were None).

Company of Liars reads more like a tale of psychological horror (with the odd unexplained, paranormal element) and the setting – time and place – are intrinsic parts of it. The fear and paranoia brought by the spreading plague as well as certain medieval customs and beliefs compound to form with the particular tale of this particular group of people a gripping story. We know that these people are all liars – some by profession, others for self-preservation – including the narrator, which adds a bit of unreliability to Camelot’s narrative. It is a relentlessly dark story too – with violence, as well as terrible deaths and loss. I really enjoyed this aspect of the story and especially how it ended. Upon reflexion, I was never sad though, there was always a degree of emotional disconnect with the story. I think this is important when considering this book – so many deaths, so many horrible things happening and I was never sad. For a book about the Plague and psychological torment, I would expect to feel a certain amount of sadness especially considering how some of the characters suffer terribly. It reminds me of another Plague book – Doomsday Book by Connie Willis which is also full of death and loss but in its case: so, so heartbreaking (Agnes!).

I was extremely fascinated by the details of daily life, by the very premise of a plague-ridden country and how people grow terrified of it not to mention the author’s apparent Medieval knowledge (holy crap, the whole custom of Cripples’ Wedding is horrifying!) [1. The author mentions this custom in the historical notes as a Real Thing but I found no mention of this online, anyone can point me to a source that confirms this? Thanks!] and basically devoured the book in one sitting – despite realising that yes, the book is overlong, quite info dumpy and I was able to predict every single revelation including the Big One.

And I say “apparent” because some things felt incongruous.

For example, Narigorm read Runes (which, as far as I know, is a Germanic thing?) but worships an Irish Goddess through them – I am not sure how the two work together? Similarly, some of the character’s world views seemed far too modern? Camelot’s easy acceptance of homosexuality (which ok, is awesome and cool), incest (which is not so awesome) not to mention a certain abjuration of religious beliefs felt too out of place?

Although these things that felt incongruous could be argued to be realistic in a way. Considering that people are not and have never been an homogeneous block of thought in which every single person believes the same and acts the same it could be argued that some of them would be outside what was considered to be “the norm”. There is a reason for the Inquisition to exist after all and Medieval Europe was a period rife with non-conformity and heresies. It therefore stands to reason that people like this particular group for example – formed of persecuted people to some extent – would themselves have a more malleable point of view?

I also have feelings about female representation in the story. The female characters hardly even spoke. One of them was in the story for two seconds then got killed. Another was barely characterised beyond “pregnant”. One is a horrendous villain without real motivation. In contrast, the male characters are much better developed with lovingly explored back stories. Even the Big Revelation (which I shan’t spoil) reinforces that in my eyes, as it could be constructed as an explanation as to how a certain character behaves and feels placing this right bang in the middle of Gender Essentialism…it could go something like this: “of course that character behaves like that, after all that character is a (x gender)”.

As you can see, I was not exaggerating when I said I had conflicted feelings about it. I can see these flaws, they do bother me a lot now, they didn’t bother me when reading the book. I would recommend it but with reservations and will 100% be back for more from this author and very soon too. Isn’t that strange?

You’ve heard tales of beauty and the beast. How a fair maid falls in love with a monster and sees the beauty of his soul beneath the hideous visage. But you’ve never heard the tale of the handsome man falling for the monstrous woman and finding joy in her love, because it doesn’t happen, not even in a story-teller’s tale.