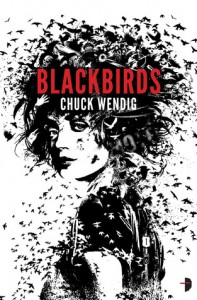 But when Miriam hitches a ride with Louis Darling and shakes his hand, she sees that in thirty days Louis will be murdered while he calls her name. Louis will die because he met her, and she will be the next victim.

No matter what she does she can’t save Louis. But if she wants to stay alive, she’ll have to try.

Stand alone or series: First in the Miriam Black series

How did I get this book: Review copy via NetGalley

Why did I read this book: Such a striking cover! Sounded so good!

In Which I Am A Party-Pooper. Again.

Reviews have been mostly positive about Blackbirds and I can sort of see why. This is a fairly competent Urban Fantasy novel about a woman called Miriam Black who can – upon touching flesh – see how a person is going to die. Understandably, she is a majorly fucked up character who has basically given up on living a normal life. So she just roams aimlessly from motel room to motel room, sometimes making use of the information with regards to their time of death to be there and steal their money. Then this one day she comes across this Nice Guy named Louis whom she sees, will die soon, saying her name. In an attempt to defy Destiny, she does her best to stay away from him – but as I said, he is a Nice Guy so she can’t stay away and ends up falling in love – because he is a Nice Guy. There is also this other relationship between her and a con-man who blackmails her into using her skillz to help his cons.

Long story short: Blackbirds seems to subscribe to the idea that the Real World is grim and gritty and messed up. The vast majority of characters that Miriam meets are those types of low-life losers, criminals, rapists, etc etc. Miriam herself is a foul-mouthed abrasive heroine and instead of finding it edgy as I am sure it was the intention, I just found it all SO boringly mundane. In all fairness, I am not usually a fan of Grim and Gritty so there is that to be taken into consideration. But beyond that, I have seen this particular story done before, there is nothing new or original about an abrasive, damaged UF heroine who is struggling with the conceits of free will x fate. Been there, read that.

Most of my lukewarm reaction to Blackbirds can definitely be chalked up to personal preference. However, there is something that goes beyond that: the issue of female representation in this story. It grieves me that I having to write about this again. It grieves me that this is the fourth review IN A ROW in which I find myself writing about this topic. But alas.

Blackbirds is for lack of a better expression: una fiesta de dicks.

Although the main character is a woman, the sheer abundance of men in this story is mind-blowing. More than that, it is amazing how the life of this heroine and of the one other female character (villain, psychopath) are always in relation to the men. It is because of a dude that Miriam sets out in this arc; it is because of a dude that she finds herself in trouble; it is possibly because of a guy that she is scarred and has become what she is (to be seen, probably will be developed in the second book). She has no relationships with women and the vast majority of people she meets in her nomad life are men; she keeps describing the visions of death she has and 99% of them are men’s. I ask: where are the women in this world? Similarly with the female villain: her breakthrough as a psychopath started because of a man (her husband) and developed because of another man (her boss).

Loads of man-pain as well. Louis is a Nice Guy because of…reasons (he is not a rapist or a criminal, I guess) and he is damaged by the death of his wife. Not because he loves her or misses her. Not because it was a tragic even that ended HER short life. No, of course not. HIS pain comes from HIM feeling guilty for her death. It is all about HIS guilt rather than HER death. Yes, it sucks, I get it and I understand how messed up he can be because of it but in conjunction with all the dude love in this novel, it is just Too.Much.Dick.

The Death of Del Amico

When the lights come in, Miriam regards herself in the dirty mirror.

I look like something blown in off a dusty highway, she thinks. Dirty, torn jeans. Tight white tee. Bleach blonde hair, the roots coming up, those dark, earthen roots.

She puts her hands on her hips and cocks them this way, then that. With the back of her hand, she wipes away a smear of lipstick from where Del kissed her.

“The lights need to be on,” she says to nobody, foretelling the future.

She clicks the lamp by the bed. Piss-yellow light illumines the ratty room.

A roach sits paralyzed in the middle of the floor.

The roach does as it’s told. It boogies under the pull-down bed, relieved.

Back to the mirror, then.

“They always said you were an old soul,” she mutters. Tonight she’s really feeling it.

In the bathroom, the shower hisses. It’s almost time now. She sits down on the side of the bed and rubs her eyes, yawns.

She hears the squeaking of the shower knobs. The pipes in the walls groan and stutter like a train is passing. Miriam balls up her monkeys toes and flexes them tight. The toe-knuckles pop.In the bathroom, Del is humming. Some Podunk fuckwit country tune. She hates country. That music is the dull, throbbing pulse-beat of the Heartland. Wait. This is North Carolina, right? Is North Carolina the Heartland? Whatever. The Heartland. The Confederacy. The Wide Open Nowhere. Did it matter?

The bathroom door opens, and Del Amico steps out, wreathed in ghosts of steam.

Reading Next: Unrest by Michelle Harrison