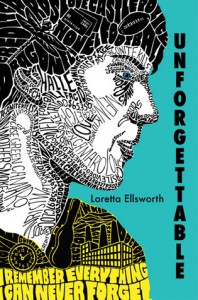 Baxter Green isn’t like everyone else. While most people would forget about the little details of everyday life, Baxter never forgets—not pain, not hurt, not embarrassment. In fact, Baxter never forgets anything—not even a string of account numbers, flashed before his eyes by his mother’s criminal boyfriend, Dink, for use in a credit card scam. Years after his testimony has locked Dink away, Baxter and his mother are in a new town, trying to forget the danger Dink brought into their lives. Baxter wants to hide his unique ability, but it becomes increasingly more difficult when he reconnects with Hallie, a girl from his childhood who has lived on in his memory long after she has forgotten him. Can Baxter win Hallie’s heart? Loretta Ellsworth’s newest novel is one readers will never forget.

How did I get this book: Review copy from BEA

Why did I read this book: I stumbled upon a copy of this book at BEA and when I saw the cover and read the blurb I was intrigued as I love reading books that deal with memory.

I am a bit of a geek when it comes to reading books that have “memory” as a central theme because I find the subject fascinating; I especially like the exploration of how memory relates to emotions and growing up/old. This is why I tend to love unreliable narrators as most of the time, there is something wrong with their memories of the events that are being narrated. This is why I love Peter Pan so much: the way I interpret it, Peter never grows up because his memory of events fade and as such, in his mind, he is always a child.

This is also why, when I came across Unforgettable and read its blurb, I knew I would be reading it. Its main character, Baxter Green had an accident when he was three and ever since then he remembers every single detail of his life. He also has synaesthesia (and the two conditions might be connected) which means that he hears voices as colours, textures or sounds. These combine to make Baxter a singular, somewhat awkward 15 year old. At the opening of this story he and his mother are starting over, on the run and hiding from her ex-boyfriend who tried to exploit Baxter’s ability in a credit card scam and has now been released from jail. This starting over presents Baxter with the opportunity to not only lay low as a regular guy, hiding his excellent memory but to also try to reconnect with his kindergarten crush, Halle, whom he believes is his soul mate.

The story progresses as Baxter and Halle become friends (although SHE doesn’t remember HIM), both get engaged in the environmental issues that surround the town they live in and then Dink comes back to terrorise Baxter again.

There was a minor stumbling block in the beginning as one particular plot point felt really contrived but I was able to look pass this because of the competent writing style and Baxter’s voice. Furthermore, I thought Unforgettable combined really well common facets of Contemporary YA with the uniqueness of Baxter’s condition. The former dealt with coming of age, finding oneself, falling in love but it’s the latter aspects that made the book for me.

Given my penchant for the topic it is not surprising that the most interesting aspect of the story to me was the exploration of memory and how it affects the lives of people. I kept wondering what must it be like to have a perfect memory – how would someone feel if they could remember every single thing that has ever happened to them? If I had a crush on someone when I was 3, would I always love this person simply because I remember the feelings and the person so vividly? How does perfect memory affect how one feels?

In that sense, I was able to relate to and understand Baxter’s frustration with his condition and I felt for him – he not only remembered things but also all the accompanying feelings he had at the time he experienced events. At the same time, I thought extremely compelling the way that the author explored the relationship between memory, emotions and maturity which brought up another aspect: that of the interpretation of those memories. Yes, Baxter had perfect memory but that does not necessarily mean that they were true in their purest form. Because there is always room for interpretation: this is all the more evidenced when it comes to his memories of Halle. He does remember clearly everything that they experienced when they were really, really young. But that very youth colours the manner which he remembers her because he didn’t have the emotional maturity to understand those memories.

There were also truly beautiful moments when his memory proved to nothing but a gift: to his mother for example, when he provided her with a long lost memory of his late father. She, on the other hand, would by return, give him a more mature outlook and interpretation of events, something that he is too young and immature to grasp. Not to mention that throughout the story, there were correlations with The Great Gatsby (which Baxter was reading for school) that made me want to read that book pronto.

Although at times, I did feel that the plot had far too many threads, ultimately Unforgettable proved to be a very good read with fascinating details.

Notable quotes/parts: I thought this was an interesting passage, when Baxter has to tell Halle what he remembers about Gatsby, which is everything of course, and he puts it in perspective.

I stare down at Gatsby and try to pick my words carefully. A library helper walks by with a cart full of books. I read the titles as she passes. Two years from now I’ll still remember them, be able to list them in alphabetical order. If I’d been born three hundred years ago, I could have been hung for witchcraft. If I’d been born eighty years ago, I could have been stuck in an insane asylum. Odd behavior begts off punishment.

Reading next: Goliath by Scott Westerfeld

We are the first stop in the official Unforgettable Blog Tour and we are giving away a SIGNED copy of the book to one lucky winner. The contest is open to US and CANADA addresses ONLY and will run until Saturday, October 1 at 11:59PM (PST). In order to enter, leave a comment here. Only one entry per person, please! Multiple comments will be automatically disqualified. Good luck!