A few weeks ago, our UK HQ received what can only be described as the coolest book-related invitation ever. To celebrate the release of Nightshade, the sequel to The Poison Diaries, I was to be whisked away to Alnwick Castle in the North of England and take part in a two-day event visiting the locations featured in the books. I had visited Alnwick Castle before on a trip to Northumberland but the opportunity to actually stay on the Castle was too good to pass so I thought HELL YES, gracefully (read: as fast as I could press “send”) accepted the invitation and embarked on this journey. I was not prepared for how awesome it would be. 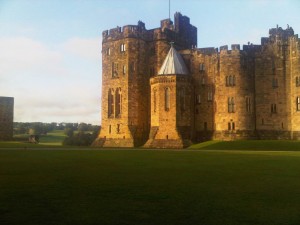 But first, a bit of background. The first book, The Poison Diaries was released in 2010 and was written by Maryrose Wood based on a concept by the Duchess of Northumberland. I actually have had the book on my TBR for ages and I read it a few days ago as preparation for the trip. The book follows the story of Jessamine Luxton, a young woman who lives with her father in a cottage within the grounds of Alnwick Castle and the story is set towards the end of the 18th century. Jessamine’s father is a respected apothecary obsessed with plants and their curative (or killing) powers. His most prized possession is his poison garden which he keeps locked – much to Jessamine’s discontent as ever since she was little she has wanted to visit the garden and see for herself this side of her father’s life. The two live in isolation until one day they are joined by an orphaned boy called Weed. Weed has a very special gift – he can communicate with any living plant and Jessamine’s father becomes obsessed with this extraordinary power.

The book is pretty good. Its main theme is the uneasy dichotomy between the power to cure and to kill (which all the characters to one extension or another have) as well as the examination of how far one person would go for love (love for another person or love of knowledge). It almost reads like a fairytale and is probably one of the darkest examples of YA I ever read – the ending is absolutely shocking.

I am really glad I was able to read the book before the event because visiting the places that inspired the story was super cool. The first book-related stop was at the ruins of Hulne Abbey, the ruins of a medieval Carmelite monastery. In the middle of the abbey grounds stands a cottage, converted from the abbey’s church – this is where Jessamine and her father live in the book: 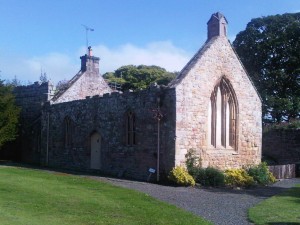 We were joined at this point by the Duchess who talked about how she has always been fascinated by the power of plants – it was a very interesting intro to the proceedings. We also got to talk to a couple of historians who work at the Castle who told us all about the history of the Abbey and the monks who lived there. History geek that I am, I was in heaven and took the opportunity to ask as many questions as I could (the conservation work that they do there is AMAZING).

Over the course of that afternoon and evening we visited the grounds of the Castle as well as the Castle’s library – where Jessamine’s father usually goes to research about plants. This is one of the books that he might have come across in one of those visits: 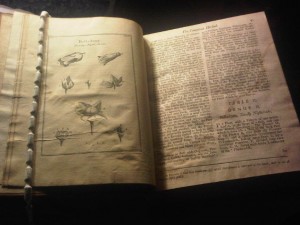 The Compleat Herbal: or, The Botanical Institutions of Mr Tournefort, 1730.

And of course, the event would not be complete without a visit to the Poison Garden – created by the Duchess, part of the awesome Alnwick Garden and the main inspiration for the story. 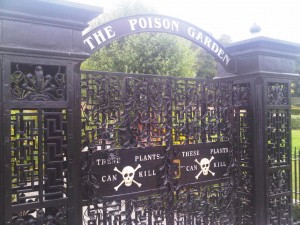 Behind its locked gates are many deadly plants, including Oleander, the Prince of Poisons (and one of the Villains of the book). It is so deadly, it is kept in a cage: 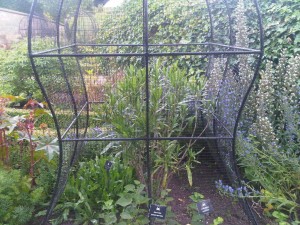 As a book-related event, this rocked my world. It is not always that one has the opportunity to visit the places that inspire a story and I had a really wonderful time – not only because of the sightseeing and the opportunity to spend the night at an Actual.Medieval.Castle but also because of all the cool bloggers that attended the event. One of the highlights was definitely chatting about books with a bunch of awesome people in the courtyard of the Castle till midnight.

And because this was so awesome and the book is so good and deserving of more spotlight than it ever got, I am going to give away TWO copies of The Poison Diaries (you can read more about the book HERE) to two lucky winners. 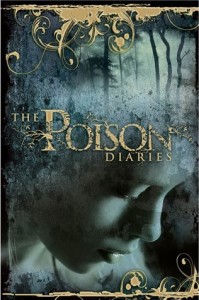 To enter, leave a comment telling us which is your favourite Dark YA novel. Contest is open to EVERYBODY, ANYWHERE and runs till Saturday August 6th, 11:59 PM (PST). Only one entry per person, please! Multiple comments will be disqualified. Good luck!

The Universe of Worldbuilding by Cam Baity & Benny Zelkowicz (& Giveaway)