Flowing from Steph Su Reads, the next stop on the MundiMoms’ LUMINOUS Blog Tour is….us! 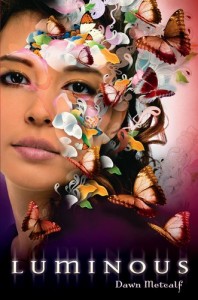 As reality slips and time stands still, Consuela finds herself thrust into the world of the Flow. Removed from all she loves into this shifting world overlapping our own, Consuela quickly discovers she has the power to step out of her earthly skin and cloak herself in new ones-skins made from the world around her, crafted from water, fire, air. She is joined by other teens with extraordinary abilities, bound together to safeguard a world they can affect, but where they no longer belong.

When murder threatens to undo the Flow, the Watcher charges Consuela and elusive, attractive V to stop the killer. But the psychopath who threatens her new world may also hold the only key to Consuela’s way home.

Stand alone or series: It seems to be a stand alone but it could certainly be the first in a series as well.

How did I get this book: I was given a review copy as part of the Blog Tour.

Why did I read this book: Luminous has been on my radar ever since I saw the beautiful cover and read the blurb months ago. When we were invited to be a part of the tour by writing a review, I was eager to say yes.

17-year-old Consuela Chavez is trying to buy a new pair of jeans when she has a sudden wave of vertigo in the dressing room. As she starts to faint, the mirror nearby shows a pair of eyes that are not her own and then the whispered words “know thyself” help her suppress the fainting spell. Back home, as she is taking a bath before her parents take her to see the doctor, she finds a lump at the back of her neck and discovers that her fingers can sink through her skin – a skin that she easily sheds. Walking around in her glowing skeleton form, Consuela finds herself imbued with a new-found sense of freedom: this is who I am she thinks, the rest is nothing but skin. Oddly detached and unperturbed by this strange development, Consuela finds herself in a dream-like place called the Flow, where she has the power to create other skins which are made of anything she can conjure up (air, fire and water, etc) and she does so any time she feels compelled to help strangers to overcome a difficult moment in their lives.

In the Flow, she finds others like her, other teenagers who have different abilities that they use to help troubled people on the “other side”, compelled by what seems to be a “mission”. Just like Consuela, they are nothing but passing inhabitants of the Flow, a place where no one stays for long. Amongst them, Sissy the Watcher, the one who is currently in charge of overseeing the Flow; Wish, the young boy whose tooth is a wishing device; Tender, the only one who has stayed in the Flow for what feels like forever and whose task is to tend to it; and finally, V, who Consuela shares an immediate connection with.

Due to her unique abilities and the unusual circumstances of her entry into the Flow, Consuela, now known as Bones, is regarded as a Game Changer. And then, right about the time she joins the group, people start to get murdered within the Flow, one after another. What will happen when everybody dies? And who is killing all of them?

Luminous is equal parts Fantasy, Mystery and Coming of Age and as such, it is a rather ambitious novel for a first time author. The result is a mixed bag: a combination of incredible imagery and great ideas with a confusing plot and lukewarm characterisation (expect for the antagonist, but more on that later on).

The world of the Flow is remarkable and easily the best aspect of the novel especially when coupled with the whimsical writing style. From the get go, the reader is swept away into this world with little to no explanation about what exactly is going on, which mirrors exactly the main character’s journey. The very idea of the Flow as an in-between place where these teens are compelled to help others using different abilities is extremely interesting.

There is also the fact that each inhabitant of the Flow has a theory to explain its existence, and those theories vary according to each character’s background. Consuela, for example, is Catholic and to her there is a degree to which God might be responsible for it and that perhaps they are all angels. But there is also a Jewish boy, and a Native American guy and both have different perspectives. Not to mention Tender, whose approach comes from a scientific approach rather than a religious one.

Having said that, there are many, many questions left unanswered with regards to the Flow, the most insistent one inside my head is the one that asks: why teenagers only? And why only a handful of people? How is that effective, even considering the arbitrary manner in which people seem to be picked and placed in their positions? This arbitrary theme is another thought-provoking side of Luminous: do these people have any say in the matter? What about Free Will? The fact that they carry on regardless of these points is not really explored in depth and I wish it was. One other question that I had and that I didn’t think was convincingly answered: what exactly makes Consuela so special, capable of such wonders? The ending was especially frustrating in that regard, but perhaps this point will be better explored in the sequel.

But going back to what I liked about the novel. One aspect that I loved is the fact that the heroine spends the majority of the novel as a Skeleton because well, I thought that was simply cool. BUT it does raise some questions when juxtaposed with other facets of her character. The novel opens as Consuela is having problems finding a pair of jeans that could suit her body – it is implied that her hips and her body figure are different than those that would fit skinny jeans and those come from her Mexican ancestry. Once she sheds her Mexican skin, she feels better, unencumbered by racism, expectations and her own shyness. The point seems to be that everybody is equal, the same, at that basic, skeleton level, which is not an original idea, but it is of course a good point, because we are. But I do wonder if the fact that Consuela is only self-confident and powerful when she sheds her outward skin doesn’t represent a problem in itself: I do wish she had realised that everybody was equal without having to shed her Mexican skin. Although in all fairness, she does become more “adjusted” to it by the end of the novel although her Bones form remains her more powerful one. It will be interesting to read other reviews and discuss this point with other readers.

With regard to the other characters, I felt I barely knew them and it was difficult to form attachments or even form an opinion, except for V and Tender. V, the love interest, proved to be a walking talking cliché from the insta-attraction and insta-attachment he formed with Consuela (which included an uncanny connection where Consuela could hear his thoughts with no explanation whatsoever as to why she could do that) to his description as “darkly” handsome and ultra-hot. This frustrated me not only because I usually tend to dislike intensely insta-anything but also because Consuela proved to be extremely hung-up on what he thought of her. For instance, he thought she was beautiful and she didn’t believe it because how could he; he thought she was strong (based on a “feeling”) and she wondered how could he have so much faith in her (I don’t know either. He barely knew her). This connection seemed to be based purely on instinct rather than on factual evidence and as a reader it is difficult to get behind a romance when you can’t possibly share those instinctual feelings.

Tender, the antagonist, on the other hand, was fascinating and my favourite character – not because he was likeable but because his story was portrayed in a manner that made it easy to feel sympathy and even pity for him, even at his most psychopathic. Going back to the idea of free will vs determinism it sucks that he is arbitrarily placed into a role that consumed him to the point of craziness without having any say whatsoever. I hope this facet of the Flow is fully developed in the sequel – assuming that there will be one.

Ultimately, as already mentioned, Luminous turned out to be a mixed bag for me. I loved the premise, the idea of the flow, the whimsical writing, the darkness of the plot and some of the thought-provoking aspects of the novel. But I also had problems with some of the writing especially when it came to the romance, as it fell into cliché territory and with the fact that some ideas were never truly explored or explained which made for a frustrating reading experience: I could see, feel the potential right there at the tip of my fingers but it kept evading me. The good news is that, since this is a début novel, this potential can – and I hope it will, because I liked this author’s style – be reached in further novels.

Now, it’s clear that no one really expects massive change to take place one single human life at a time; that would require far more people in the Flow and certainly more time than even time here permits. There are too many people living too many disparate lives to protect each one of them from every foible known to man,” he said, scratching his knee. “Therefore, my theory is that we’re concentrating our efforts on individuals who happen to have the ability to achieve maximum impact on the maximum number of other people around them.

More on the Blog Tour:

This review on the MundiMoms’ LUMINOUS Blog Tour was brought to you by the letter: E. Collect all the letters along the blog tour, unscramble the puzzle, and win a secret surprise as well as an extra entry in the LUMINOUS Grand Prize Giveaway, June 30th! More details at www.dawnmetcalf.com.

Rating: 5 – Right bang in the middle of the scale. It isn’t bad but it could have been so much better!

Over at Kirkus: Royal Bastards by Andrew Shvarts