And Then What Happened…

Headline, the UK publisher of Stories, the anthology edited by Neil Gaiman and Al Sarrantonio, came up with a brilliant idea to celebrate the paperback release this month: they invited a bunch of bloggers, including us, to participate on a round robin short story. Each of us got to write 100 words, following up from the 100 previous words, without any knowledge where the story began or where it would end – the only real guideline was to follow the premise of the book: ‘And Then What Happened?’

Today we received the final story and it is MADE OF AWESOME and OH SO funny. Check it out (and try to guess which part we wrote)! 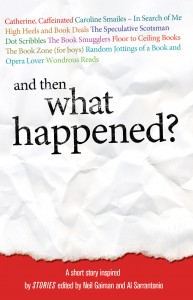 It happened so quickly.

This came as a surprise to Michelle, who in idle moments had imagined a car crash must feel like it was happening in super slow motion. Seconds become minutes, and all that jazz. Wasn’t that what they said on those accident investigation programmes?

But now here it was, really happening, and it had been but a blink. It had happened so fast, in fact, that it wasn’t until a pair of feet appeared by Michelle’s forehead that she realised the car had flipped. They were upside down.

Michelle woke in a bed, not her bed. The air was full of garlic and red wine. She could hear voices in a different room, people were singing and laughing.

‘Where am I?’ Michelle croaked into darkness.

‘Safe,’ a voice replied but no one stepped forward. ‘We were able to make you better,’ the voice whispered.

There was something in the murmur of the word that made Michelle ask, ‘Better?’

‘Enhanced, innovative, kinky,’ a voice replied. ‘The surgery was successful.’

Michelle tried to swing her legs off the bed but they wouldn’t move. It was then that she realised. She was tied to the bed. No, she was shackled to the bed. She tried to sit up but her wrists were shackled too. Wait. She could lift her head! Her eyes flitted around the room. She didn’t recognise anything. Where the fuck was she?

A bright light came on. Michelle noticed the walls were covered in padding – some sort of sound proofing. But she’d heard music, people. Had she been dreaming?

And then she saw him.

‘You said I was safe!’ She screamed. ‘If you touch me again, you mad bastard, I’ll fucking…’

Daniel came towards her holding not a knife, or even a needle. Of all things, the whitecoat bore towards her bearing Tupperware.

‘You’ll fucking what?’ Daniel teased as the dead-zone between them diminished.

‘You’re ours now, Michelle. You’ll do what we tell you, when we tell you. The sooner you make your peace with that, sweetheart, the easier this’ll be.’

But she wasn’t listening. She was transfixed by the red-black mess spattering the walls of the clear plastic container, whose horrific contents Daniel stooped to show her.

His thin smile said it all.

‘Don’t you recognise your own brain Michelle? Hmmm, I would have thought anyone would recognize their own brain?.’

Michelle felt cold, Daniel was still smiling at her, a sick, twisted smile. She lifted her hands to her head and felt that it was covered in bandages.

‘How? I don’t understand? I’ve been here all the time, how am I here if you have that?’ tears welled up in her eyes.

‘Oh don’t worry,’ Daniel threw his head back and laughed, ‘We didn’t take it all and we filled in the gap with our own little device, as I said, you’re ours now. Now here’s the plan…’

Daniel went on (and on) babbling about his ridiculous evil plan but Michelle paid little attention to what he was saying. She almost rolled her eyes at the absurdity but managed to control herself just in time. She let him go on and cried a bit more so he would think she was utterly defeated. Little did Daniel and his minions know, she had the upper hand as her brain could regenerate and would eventually absorb the device.

‘They think I am theirs now, do they? Well, let’s see what they think
about the fact that they are about to become minions to a HIGHER POWER!’

With a wriggle of her nose that was unnecessary to the casting of the spell, but that Michelle knew was the cutest thing she did, she flung her arms wide and summoned the demon Anamalech. She smirked as the eyes of Daniel and his sniveling minions grew wide with panic. In front of them appeared a ball of smoke, which span and hissed and grew to man-size proportions. Michelle coughed discreetly into her hand as the smoke hit the back of her throat then cleared to reveal a confused looking gentleman. As a result of that ridiculous nasal twitch Michelle had inadvertently summoned a morris dancer called Derek.

‘Magic and vanity do not mix well,’ Daniel hissed. ‘It is a precise art, where even the smallest twitch can ruin a spell.’

‘What are you afraid of? His handkerchiefs?’ he shouted to his followers. ‘Finish her off!’

Daniel’s drooling slaves surged forward as one, with Derek caught right in their path. However, the moment one of them touched him, there was a jangle of bells and another white-clad man appeared by his side. And then another. And another until Michelle could see Daniel no longer. Then came a flash as he summoned a lightning bolt and with one bound was free. In panic Michelle wriggled her nose again and prayed that this time she got it right. She felt herself whirling with lights flashing all around and shrieks of dismay from the Morris dancers who had been caught up in the maelstrom. She could hear cackles of laughter as Anamalech exerted his mighty power and she knew she had overestimated her control over him.

‘You are mine’ he shrieked. ‘Your brain may absorb the device, but I shall extract it from you and then I shall rule the world with my accomplice’ as he revealed Daniel at his side.

‘You did not think for one minute I was going to help you did you?’

But he underestimated British backbone and the dancers with their bells and sticks and cries of ‘Get them chaps’ turned on the deadly duo and soon had them lying on the ground crying for mercy.

Michelle watched full of gratitude that the whole ghastly business was now at an end.

Daniel wrestled his way up from the ground and through the Morris dancers, not even stopping to comment on their excellent choice of attire. That could wait, he thought; fashion wasn’t going anywhere, but he soon might be. He made his way over to Michelle, who stood rigid in front of Derek. Was this dude for real?

‘Get out of my way’, Daniel shouted, before pushing Derek to the side like he was nothing more than an unwanted hat stand. ‘Michelle, are you okay? We need to get out of here, like, now’.

‘But you don’t like me’, she sneered back. ‘You just spent half an hour trying to kill me, you bloody idiot’.

‘I know, but I just had a brainwave, if you’ll excuse the pun, and I don’t want to be anyone’s lackey. Least of all Anamalech’s. He’s starting to bore me, and you’re much more interesting. For one thing, I’m now much smarter than you. So, come on. Let’s go!’

With that he faced the open window, and a pair of giant, irridescent wings emerged from Daniel’s shoulder blades, bathing the room – and the Morris dancers – in bright light.

Many thanks to Sam Eades at Headline for inviting us and the other bloggers for making it so much fun.

Over at Kirkus: The Fall of the House of West by Paul Pope