Book Review: Outside In by Maria V. Snyder 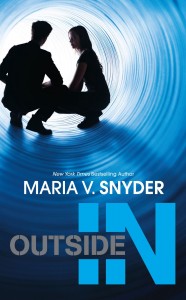 Stand alone or series: Book 2 in the Inside Out series

Okay, I did prove that there’s more to Inside than we knew.

That a whole world exists beyond this cube we live in. And finding that led to a major rebellion—between worker scrubs like me and the snobby uppers who rule our world. Make that ruled. Because of me, we’re free. I thought that meant I was off the hook, and could go off on my own again—while still touching base with Riley, of course. He’s the one upper I think I can trust. But then we learned that there’s outside and then there is Outside.

And something from Outside wants In.

Why did I read this book: Honestly, I wasn’t impressed much at all with the first book in this series, Inside Out, BUT, I’ve read and enjoyed Maria V. Snyder’s work before (the first books in her Study series were good fun), and I felt that there was potential in this series for growth. I felt like I owed it to myself to give Outside In a try…

Given how little i enjoyed the first book in this series, you’re probably going to read this review whilst shaking your head, tsking and saying that I had it coming, or “I told you so,” or something of that nature. Yes, dear readers. Yes, universe. You were right. I should have decided a long time ago to stay in a galaxy far, far away from Outside In. But I’m getting ahead of myself. First, the story:

Trella is a Scrub. Actually, she’s more than just your average, everyday Scrub; she’s the Queen of the Pipes, and the girl single-handedly incited the Force of the Sheep Rebellion in Inside Out.[1. I swear, I am not making up any of these monikers or labels.] Since the revolution and overthrowing the dread Trava Family and prying their evil, dictatorish iron grip from power and discovering the true nature of Outside as a mysterious vacuum known as Outer Space, life has been…well, complicated. Although the Pop Cops no longer prowl the grided halls, Trella and her fellow Scrubs (and Uppers) soon learn that the aftermath of rebellion is not so peaceful and kumbaya as they’d imagined it would be. The Travas remain in custody, and a new committee has been formed to make decisions, but Trella wants nothing to do with the organization and management of Inside. Rather, she’d like to stay an innocuous Scrub, helping out with impunity in an attempt to preserve her freedom – and lack of larger responsibility – for as long as humanly possible. When anonymous saboteurs begin to detonate bombs Inside and wreak havoc, however, Trella and her friends are forced to make tough decisions and get involved once more, for the fate of every single soul Inside hangs in the balance.

All cards on the table – Outside In simply is not the book for me. The overwhelming majority of reviews for this title (and its predecessor) are super positive, and I get that I’m probably not the target audience for this book. So far this year, the big name YA Sci Fi fantasy novels so warmly received by the YA blogosphere have fizzled and disappointed me, so maybe this is just a personal failing, or difference of opinion. I’m rambling. In any case, I unfortunately did not like Outside In in any capacity. From writing style, to conception of the world, to characterizations, to technology, Outside In was a big fat reader fail, in this reader’s mind.

Let’s start with the minor positives though. The only thing I really appreciated about Outside In was with its social constructs. I loved that after such a dramatic rebellion and overhaul of power, things Inside are a mess – because, let’s face it. After a revolution, things don’t get magically all better; people don’t get along on their own, as Trella irritatingly – naively – believes. I thought that aspect of the story was quite well done, at least felt realistic, from the ineffectual nature of committees and the lack of social integration between Uppers and Scrubs, to the lack of authoritative figures (i.e. Pop Cops) to enforce rules. I can also respect Trella’s desires to stay outside of power and politics, but only to a point. After 200 pages of Trella rehashing the exact same conversation with Riley, Logan and the good ship doctor Lamont – in between bouts of Desperate Danger and Serious Bodily Injury (because, of course, Trella spends so much time in sickbay due to her superhuman acts of heroism/idiocy/martyrdom) – about how she doesn’t want responsibility, how she’s not meant for the committee, blah di blah di blah, it starts to get a liiiittle bit grating on one’s nerves. As for the other major plot development, the presence of “outsiders” (not spoiler tagging because it’s clear from the synopsis and title of the book), didn’t really strike me as necessary to the book. Obviously, once the outsiders become known, they change the trajectory of the story, shifting the focus from internal strife to banding together against an external threat – which feels like a writerly cop-out, actually. How much more interesting (and difficult!) would it have been for Trella and the committee to fix their own messes without the stimulus of an outside threat to unite the people of Inside? But, again, that’s just my opinion (and one firmly rooted in the minority, at that).

From a writing and character standpoint, certain stylistic things bothered me inordinately in this second book. The weird/forced emphasis on Sheep (in particular, a stuffed sheep named Sheepy, as well as a cleaning/scrubbing device called Zippy – really, with these names?! REALLY?) bugged the bejesus outta me. I think the repeated references to a stuffed sheep were meant to be endearing/cute (romantic?), but the constant repetition and presence of that damned stuffed animal (and other devices irritatingly named with that cutesy -y suffix) was incredibly trying. There also is a tendency to relay emotions through some painful, repetitive and plain descriptive sentences (for example, “As he examined it, a shocked horror filled his eyes”). There’s also a bizarrely sanitized, almost-romance novel thing going on throughout the book (nipples, naked soapy showers that are weirdly super-PG, lots of almost sex to be cut off by weak protestations, you get the picture. Speaking of which, Riley has the best willpower and…erm…control of any teenage boy I’ve ever known).

My other major problems lay with the actual world of “Inside” and its odd sense of technology. Trella’s world has sophisticated computer systems, magical skingrafting systems that can repair third degree burns over half of a person’s body in a matter of hours, instant DNA matching medical systems, food and waste recycling plants, and other hi-tech toys. And yet, everyone runs around with….whiteboards and dry-erase markers. I don’t know why this bothers me so much, besides the fact that it is such a ludicrous image. Where do the markers come from? Is there a whiteboard and marker processing plant on board? How can Trella NOT know what a video camera is, when microphones and bugging devices and EMP devices are common knowledge, for crying out loud? What about the command center of the ship? So. Many. Inconsistencies. Basically, what it boils down to is the fact that technology in these books is akin to magic – it just happens, and because Trella doesn’t care, it doesn’t matter.

And on a basic conceptual nitpick, can we also discuss the concept of “Inside” versus “Outside”? How would these characters – who have lived in one world the entire time even know the concept of the word “outside”? It’s a semantic thing, but it’s also a legitimate concern – think of different cultures with no word for certain concepts because it is not part of their worldset. There are other jarring colloquialisms that Trella and her fellow Insiders use that take away from the plausibility of this Inside world…but again, that’s just my opinion.

I love science fiction. I really, truly do. I also love YA. And as someone that wants YA Science Fiction to take off and really succeed, I could not have been more disappointed with the recent big title releases in the genre this year. Although I’m happy to see that tons of readers have read and loved this book (and hopefully will see this as a gateway book to discover some truly awesome YA SF titles) I can’t help but feel disappointed and tired. Surely, there’s a higher standard of YA Sci FI out there, right? Right?

My fingers ached as my leg muscles trembled. Beads of sweat snaked down the skin on my back, leaving an itchy trail. I clung to the almost sheer metal wall and breathe in deep. When my heart slowed to a more normal rhythm, I relaxed my right hand’s grip and stretched for the next hand hold-a short piece of pipe. Then I repeated the motion with my left, climbing another meter higher.

Far below, spots of daylight illuminated the half completed construction on level ten. Distant voices floated on the stale dusty air. I had passed the last of the bluelights. Nothing but blackness remained above me.

I cocked my head, sweeping the flashlight’s beam across the wall in search of another pipe to grab. Logan had designed a special helmet equipped with a light to keep my hands were free.

I lost my grip. Falling, I cursed my own stupidity for not switching my earring/receiver off.

“I know you can hear me,” he said with an annoyed tone. “Where are you?”

Getting one hell of a rope burn, I grabbed my safety line and squeezed to slow my fall. After what felt like a thousand weeks, I reached the end of the rope and jerked hard, biting my tongue. I swung, tasting blood and lamenting the slip. That had been the highest point I’d or anyone else had attained. Ever.

Riley grunted in frustration. “Trella, you can go exploring later. You’re late for the Committee meeting. They’re waiting for you.”

Rating: 4 – Really Bad, and nearly a DNF for me