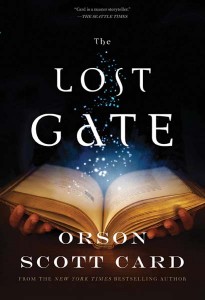 Danny North knew from early childhood that his family was different, and that he was different from them. While his cousins were learning how to create the things that commoners called fairies, ghosts, golems, trolls, werewolves, and other such miracles that were the heritage of the North family, Danny worried that he would never show a talent, never form an outself.

He grew up in the rambling old house, filled with dozens of cousins, and aunts and uncles, all ruled by his father. Their home was isolated in the mountains of western Virginia, far from town, far from schools, far from other people.

There are many secrets in the House, and many rules that Danny must follow. There is a secret library with only a few dozen books, and none of them in English — but Danny and his cousins are expected to become fluent in the language of the books. While Danny’s cousins are free to create magic whenever they like, they must never do it where outsiders might see.

Unfortunately, there are some secrets kept from Danny as well. And that will lead to disaster for the North family.

Stand alone or series: Book 1 of the Mither Mages series

Why did I read this book: Orson Scott Card (despite his repulsive personal views) is a great SFF author, and Ender’s Game (and the Ender saga of books) is an undeniable classic.[1. Let me make it clear that I completely disagree with Mr. Card’s bigoted and ludicrous views concerning homosexuality. But, as long as these opinions (however unpalatable) are not present in his books, I cannot hold them against his fictional work.] When The Lost Gate was announced last year, a book that was thirty years in the making, I was eager to get a copy for review.

Scattered and hidden in the regular, mundane human world are isolated Families, made of powerful mages known throughout history as Gods. Danny North, of the North Family, has always struggled with his own standing as the son of the current Odin and the powerful lightmage Gerd – for despite his powerful and near-royal parents, by his thirteenth year Danny has yet to show any magical ability besides an affinity for languages, speed and dexterity. Teased by his cousins and ignored by his parents and elders, Danny is seen as a drekka (or powerless mage), just barely better than the drowthers, or humans. But one day, Danny realizes that his power is the most dangerous and frightening of them all: Danny is a Gatemage. A magic worker that can create, manipulate and open portals (or gates) anywhere he can imagine, Danny’s type of power is forbidden by all the Families, and should anyone learn his power, he will be ruthlessly killed. Centuries earlier, Loki the great trickster closed all the gates on Mittlegard (Earth), including the Great Gate to the gods’ homeland of Westil. Cut off from their home and source of power, each mage family has grown weaker over the years – but should a gatemage powerful enough to open a Great Gate to Westil ever be born, his portal could rejuvenate the ailing power of whomever passes through it. When a visiting Great Family (the Greeks) come to the North Family’s isolated Virginia compound, Danny’s secret power is discovered. Hunted by his own family, Danny flees Virginia and strikes out on his own. He must learn to master his newfound power and to open a Great Gate of his own, before he can be killed by his kin.

While Danny searches for help with his abilities and staying (mostly) out of trouble, his story is alternated with that of another young powerful gatemage named Wad, who slips into the court intrigues at the great palace in the kingdom of Iceway. Careful to keep his abilities secret for all gatemages are killed upon discovery, Wad spies on all the courtiers, thwarts an assassination, falls in love, and is harshly betrayed. Wad’s fate and Danny’s fate are closely twined, and as Danny tries to search for his own answers, so too does Wad – who cannot remember his own past, or why he is the man he has become.

At first glance (and after writing this brief, incomplete synopsis), The Lost Gate is a bit schizophrenic. One part contemporary/urban fantasy, one part young adult paranormal, and one part traditional high fantasy, The Lost Gate attempts to be many things at the same time – and for the most part, it succeeds (albeit certain facets of the story are more effective than others). The main story following young Danny as he makes his way in the world without his family and comes into his own powers is well paced and engaging, made all the worthwhile because of Danny’s believable voice as a precocious young man with a lot of power at his disposal, and an affinity for pranks. There are many times when Danny is tempted into using his considerable powers for unseemly means (robbing homes, stealing books, and, of course, playing elaborate tricks), but Danny also proves himself as a trustworthy and loyal friend, endearing him to readers (plus, he’s a complete wiseass, too, which makes for fun reading). Despite Danny’s strength as a protagonist, however, I found myself more enthralled with Wad’s ancillary storyline in the palace of Iceway, preferring his much more traditional fantasy style storytelling to the occasionally flat teenage foibles of Danny’s tale. That said, I loved the way the two storylines overlap and eventually converge – hopefully Wad’s story will play a larger role in the next book.

Of course, the biggest selling point for me with The Lost Gate was with the new world(s) and magical systems that Orson Scott Card has created. Although the integration of mythological gods (Norse, Greek, or otherwise) isn’t exactly a novel concept, how each mage comes into and wields their power is fantastic stuff and wonderfully detailed. The different types of mages and the hierarchy of power, the concept of creating gates, the spacetime and physical manipulation of these portals, and managing one’s “outself” are all intriguing, imaginative concepts. The best part is, since Danny is the first gatemage in over a thousand years, there is little knowledge about anything these mages are truly capable of – so Danny’s frustration with his inability to control certain aspects of his power, and his revelations when he is able to control his magic is a constant, genuine struggle.

Despite some slow moving parts (the beginning of the book isn’t nearly as strong as the book’s second half, and there is one particularly cringeworthy section about America and Democracy and Worshiping Ideas), I found myself thoroughly engrossed by the culminating scene of The Lost Gate and I cannot wait for the next book. Recommended for both young and adult readers alike, especially those looking for a new taste of contemporary fantasy.

Danny North grew up surrounded by fairies, ghosts, talking animals, living stones, walking trees, and gods who called up wind and brought down rain, made fire from air and drew iron out of the depths of the earth as easily as ordinary people might draw up water from a well.

The North family lived on a compound in a sheltered valley in western Virginia, and most of them never went to town, for it was a matter of some shame that gods should now be forced to buy supplies and sell crops just like common people. The Family had spliced and intertwined so often over the centuries that almost all adults except one’s own parents were called Aunt and Uncle, and all the children were lumped together as “the cousins.”

To the dozens and dozens of North cousins, “town” was a distant thing, like “ocean” and “space” and “government.” What did they care about such things, except that during school hours, Auntie Tweng or Auntie Uck would rap them on the head with a thimbled finger if they didn’t come up with the right answers?

School was something the children endured in the mornings, so they could spend the afternoons learning how to create the things that commoners called fairies, ghosts, golems, trolls, werewolves, and other such miracles that were the heritage of the North family.

It was their heritage, but not every child inherited. Great-uncle Zog was notorious for muttering, “The blood’s too thin, the blood’s too thin,” because it was his considered opinion that the Norths had grown weak in the thirteen and a half centuries since the Evil One closed the gates. “Why else do we have so many weaklings who can’t send their outself more than a hundred yards?” he said once. “Why else do we have so few children who can raise a clant out of anything sturdier than pollen and dust, or heartbind with one of their clan? Why do we have these miserable drekkas like Danny in every generation? Putting them in Hammernip Hill hasn’t made us stronger. Nothing makes us stronger.”

Danny heard this when he was eleven, when it wasn’t a sure thing yet that he was a drekka. Plenty of children didn’t show any talent till they were in their teens. Or so Mama said, reassuring him; but from Great-uncle Zog’s words Danny began to doubt her. How could it be “plenty” of children who showed no talent when Danny was now the only child in the Family over the age of nine who couldn’t even figure out whether he had an outself, let alone send it out to explore. When the other kids used their outselves to spy on Danny’s school papers and copy them, he couldn’t even detect that they were there, let alone stop them.

You can read the first two chapters, along with a note from the editor, if you register at Tor.com (it’s free and easy and definitely worth it!).

Additional Thoughts: Many reviewers have cited young adult novel Jumper by Stephen Gould as a similar book to The Lost Gate. I have, unfortunately, only seen the terrible movie with Hayden Christensen, that guy from Billy Elliot, and Sam Jackson – but if you’re looking for more teleportation types of books, you could give Jumper a try. And hey look, a blurb from Orson Scott Card! 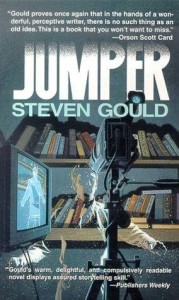 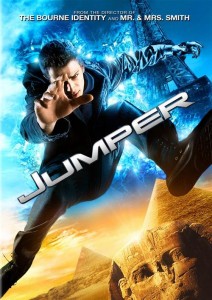 Also, The Lost Gate has a book trailer! Check it out (warning: it’s a bit cheesy and I have no idea what the skyline of downtown LA is doing in the middle of it).