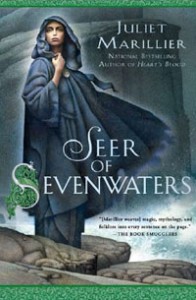 The young seer Sibeal is visiting an island of elite warriors, prior to making her final pledge as a druid. It’s there she finds Felix, a survivor of a Viking shipwreck, who’s lost his memory. The scholarly Felix and Sibeal form a natural bond. He could even be her soul mate, but Sibeal’s vocation is her true calling, and her heart must answer.

As Felix fully regains his memory, Sibeal has a runic divination showing her that Felix must go on a perilous mission-and that she will join him. The rough waters and the sea creatures they will face are no match for Sibeal’s own inner turmoil. She must choose between the two things that tug at her soul-her spirituality and a chance at love…

Stand alone or series: Book 5 of the Sevenwaters Series (although can be, ostensibly, read as a stand alone novel – though if this is done, you’ll be missing out on a lot of backstory for secondary characters)

Why did I read this book: I love Juliet Marillier. I LOVE her. She is one of my all-time favorite authors, so when I learned there was going to be another Sevenwaters book, I was understandably ecstatic (I was even MORE ecstatic when I saw that Seer of Sevenwaters had a quote from The Book Smugglers on the cover. On the freaking COVER!).

The fifth daughter of Lord Sean of Sevenwaters, Sibeal has always known she was destined for the nemetons and for the life of a Druid. Contemplative, serene and wise, Sibeal has honed her remarkable seer’s gifts and embraced her vocation as the true calling of the gods. On her sixteenth year, before she is destined to take her vows and become a true Druid, her uncle and mentor Ciaran sends Sibeal for a summer with her sisters on Inis Eala – an isle of legendary warriors. Though happily reunited with Muirrin and Clodagh, Sibeal’s faith is tested harshly when a storm of unnatural scope shipwrecks an errant vessel on Inis Eala’s rocky shores. The warriors believe only two have survived the crash – a Norseman named Knut and Svala, his impossibly beautiful but uncommunicative wife – but with her seer’s ability, Sibeal finds and manages to pull a third man, young and near death, from the ocean. Over the weeks, the young man begins to heal, and gradually his memories come back to him, much to the fear of Knut. For Felix, the young man’s remembered name, has a different tale of the ship’s journey, a hidden island, a fearsome sea serpent, and bitter betrayal that must be fixed. As Felix’s story comes to light, a perilous journey must be undertaken – one in which Sibeal must partake, in order to right the wrongs of that first voyage. And as Sibeal and Felix journey towards that impossible, monstrous isle, they also must come to terms with their own feelings for each other. Sibeal must choose between her destined future as a Druid and faith to her gods, or true love.

Though a bit slow to start, this fifth novel in the ongoing Sevenwaters series is another beautifully crafted tale, with a fair share of adventure, magic and romance. But while I thoroughly enjoyed Seer, Sibeal’s story lacks the enchantment of the earlier Sevenwaters books. There are struggles and sea creatures and danger aplenty, but this book lacked the emotional resonance of Marillier’s other work. Instead of being helplessly swept away by a torrent of mystery, magic and raw, unyielding romanticism, I found myself simply pleasantly entertained by this book. This isn’t bad or even really disappointing so much as it is…simple. Not that I am rushing to jump back through the type of emotional brutality of Ciarán and Niamh and Fainne again, but every Sevenwaters book has had the same sort of epic feel to it; Seer of Sevenwaters did not.

This is clear in the characters too, though I did come to love both Sibeal and Felix – how could I not? Every Marillier character is textured and beautifully imagined (the good and the bad). I was nervous when I learned the aspiring Druid Sibeal would be the protagonist, but her struggle for calm austerity with her very human nature and repressed emotions was a challenging and cathartic character arc, making Sibeal much more relatable and endearing as a heroine. As Clodagh remarks in a moment of metatext, “I wonder if it’s entirely good for you to keep such control over your feelings…Imagine a story in which every character was in perfect control of himself all the time. It would be somewhat lacking, in my opinion.” Though Sibeal outwardly shows this reserve and iron-clad grip on her emotions, through her narration we readers know better as she struggles with her churning uncertainties and feelings. Felix, Sibeal’s foil, is every bit the wonderful hero, too, struggling with his physical weakness and his attempts to remember what happened to him and his ill fated ship. Their romance is a natural pairing, easy and familiar, and there is no denying that from a romantic angle, Seer of Sevenwaters certainly does the trick.

And yet…I can’t help feeling that even in their own story, Sibeal and Felix were less important and interesting than their siblings and old friends. Cathal and Clodagh are big presences in this book as they are expecting their first child, and are still under the terrible fear that one day Mac Dara will find Cathal, his only son, and destroy all that he holds dear. This fear plays a central role in the overall series arc, as it becomes clear that this struggle will be at the forefront of future books. Also, seeing Gull and Johnny and the older painted men was wonderful (I’ve always loved Gull and Bran’s men) and even stole a little of Sibeal and Felix’s luster. I suppose what didn’t quite work for me was how happy and sentimental this book was – very domestic with marriage and having babies, and living happily ever after and the like. This isn’t a bad thing at all – but this book felt more simplistic and straightforward, more safe than what I have come to expect from the series. The plotting (though it does involve a sea-faring adventure, monsters and daring) also felt a little lackluster in relation to prior books. Certainly Sibeal and Felix are tested, but the truth of the mystery, of Felix’s forgotten memories, and the central conflict of the book itself were weaker than one accustomed to the stories of Sevenwaters expect.

That said, I did truly enjoy Seer of Sevenwaters and found myself pleasantly surprised and content with Sibeal’s entry in the series – I suppose I’m just spoiled and used to the exceptional when it comes to this series. I’m always happy, however, to return to the world of Sevenwaters, and I’m ready to be enthralled by Juliet Marillier once more when the next book is released.

Pull! In the name of all the gods, pull!

I haul on my oar, every muscle straining. Cold sweat shivers on my skin. Salt spray blinds me. Or do I weep? We’re going to die. We’re going to perish in the chill of the sea, far from home. Pull! Pull! We haul with our guts, with our hearts, with our last strength. We seventeen, we survivors, exhausted, sick at heart – how can we prevail against such seas? Freyja shudders a moment, balanced between muscle and swell, then plunges broadside toward the rocks. The waves snatch up the ship, and with a surge and a decisive smack, hurl her down on the reef.

A jagged spear of rock splits the prow. Splinters fly. The fine oak disintegrates like kindling under the axe. Fragments fall on the deck, a momentary pattern of augury, gone almost before I can read the signs: Eolh: protection; Eoh: comfort; Nyd: courage in the face of death. The sea surges in, erasing the runic shapes in a heartbeat. The air fills with screaming; abandoned oars fly everywhere. Struck on the temple, a man falls. Another lies limp over his bench, a red stain spreading across his tunic. Others stagger along the boat, pushing, shouting. My heart thunders. I struggle to my feet. The purchase is perilous. The shuddering deck has a tilt like a church roof. The reef is opening Freyja as a hunter’s knife opens the carcass of a deer.

Paul, gods, Paul with his feet still tied … I stagger over to where he lies half-on, half-off the bench, clutching a broken oar. The rope around his ankles is caught on a jagged length of split wood. A wave washes over me, drenching me to the chest and submerging Paul. The water recedes. Paul chokes and wheezes, sucking in air. Freyja’s timbers groan, grind, shatter. The ship is in her death throes. Crewmen fall, shrieking, into the maelstrom. Nowhere to climb to. Nowhere to shelter. No surface broad enough, flat enough, high enough for even one man to balance on and wait for rescue. There’s land not far off; smoke rising. This storm will drown us before anyone can come.

‘Here.’ I crouch down, fumbling for the rope. It’s underwater, the knots impossibly tight, the strands snagged fast in the broken wood. Too slow. A knife, I need a knife … There’s a crewman dead, his corpse washing about in the narrow gap between benches. I snatch the weapon from his belt – gods, let me do this in time, let the two of us live – and I hear Paul speak behind me. ‘Save yourself, Felix.’AsI turn back toward him a monstrous wave engulfs me. It’s in my nose, my ears, my mouth. Its surging song drowns everything. Iron bands close around my chest. The sea bears me away.

Additional Thoughts: Check out the Australian cover for Seer of Sevenwaters below: 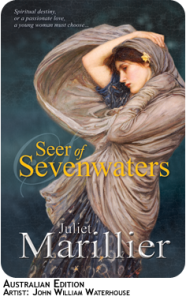 Pretty! Also, Juliet Marillier has announced that she is working on a brand new series!!! Here’s what she has to say about Shadowfell:

At last: news about my new project! The work in progress is the first novel in the Shadowfell series. The Shadowfell books are for young adult readers (approx age 13-17) but will also be a great read for adults.

The series is set in Alban, an imagined version of ancient Scotland. Until recent times, a wary tolerance has existed between the human residents of Alban and the uncanny Good Folk. Then Keldec ascends the throne, and the kingdom becomes a place of fear where magic is shunned, neighbour turns on neighbour and no secret is safe. When fifteen-year-old Neryn suffers an unthinkable betrayal of trust, she finds herself all alone in a world turned hostile. The secret she guards so closely could be her doom. It could also be the key to Alban’s future.

Shadowfell is a story of tyranny and rebellion; of magic and of human courage. Unlike most of my previous stories, Shadowfell is more fantasy than history, but it owes a lot to my love of Scottish history and folklore. The series will initially be three books, of around the same length as the Wildwood books. The first will be published in 2012.

Reading Next: Entice by Carrie Jones

Reading The Spark by Susan Jane Bigelow: In which I urge our readers to read The Extrahumans Series